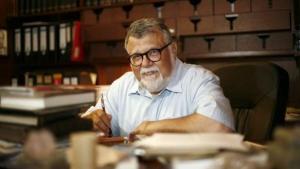 In 1981, he started to work as an assistant in Istanbul Technical University ‘Mining Faculty General Geology Chair’. He received his doctorate from the State University of New York at Albany in 1982.

*In 1981, he started to work as an assistant in the general geology department of the Mining Faculty of Istanbul Technical University.

*He received his doctorate from the State University of New York at Albant in 1982.

*In 1984, he was awarded the President’s Award of the Geological Society of London.

*He was entitled to receive the TÜBİTAK science award in 1986.

*In 1986, he received the title of associate professor at ITU Mining Faculty, Geology Department.

*In 1988, he received the honorary doctorate degree from the Faculty of Science at the University of Neuchatel.

He became an honorary member of the Austrian Geological Society in 1991.

*In 1991, he received the information age award from the Ministry of Culture.

* In 1992, he was awarded the title of Professor in the General Geology Department of the Faculty of Mines at ITU.

*How Does a Society Suicide?

*The Magic of Science