Viscosity is a measure of how resistant a liquid is to movement through it. A low-viscosity fluid is called thin, and a high-viscosity fluid is called thick. For example, it is easier to pass through a low viscosity liquid such as water than a high viscosity liquid such as honey. In short, viscosity refers to the thickness of the liquid and results from the interaction or friction between molecules in a liquid. Similar to friction between moving solids, it determines the energy required to make a fluid flow.
In physics, viscosity is often expressed using Isaac Newton’s equation of fluids, which is similar to Newton’s second law of motion. This law states that when a force acts on an object, it will cause the object to accelerate. The greater the mass of the object, the greater the force must be to accelerate it.

The viscosity formula is usually expressed using Newton’s equation of fluids F / A = n (dv / dr). Here F represents force and A represents area, so F/A or force divided by area is another way of describing viscosity. Dv divided by dr represents the pure velocity or the velocity at which the fluid moves, and N is a constant unit equal to 0.00089. Pa s is a unit of dynamic viscosity measurement (Pascal-second). This law has some important practical applications such as inkjet printing, protein formulations/injections and food/beverage manufacturing. 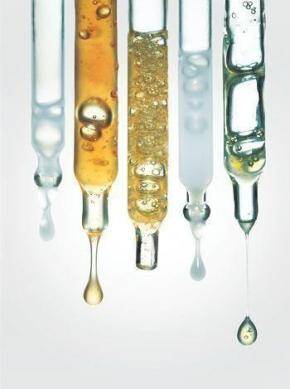 Newton’s equation relates shear stress and velocity gradient through a quantity called viscosity. A Newtonian fluid is an equilibrium in which its viscosity is just a number. Non-Newtonian fluid viscosity is a system that is a function of some mechanical variable such as shear stress or time. It is also said that non-Newtonian fluids that change over time have a memory. With some gels and pastes it behaves like a liquid when worked or shaken and then settles into an almost solid state at rest. Such materials are examples of shear thinning fluids. House paint, for example, is a shear thinning liquid, which is a good thing. Brushing, rolling or spraying are methods of temporarily applying shear stress. This reduces the viscosity of the paint to the point where it can now flow out of the applicator and onto the wall or ceiling.
When this shear stress is removed, the paint returns to its resting viscosity, which is so great that a suitably thin layer behaves like a solid rather than a liquid and the paint does not flow or drip. For comparison, consider what it would be like to paint with water or honey. The first is always very runny and the second is always very sticky. Toothpaste is another example of a material whose viscosity decreases under stress. The toothpaste behaves like a solid while sitting in the tube, but does not flow on its own when the cap is removed and flows when squeezed. Now it stops acting like a solid and starts behaving like a thick liquid. When the toothbrush falls, the stress is released and the toothpaste returns to an almost solid state. There is no need to worry about it flowing from the brush when lifting it to the mouth. Shear thinning fluids can be classified into one of three general groups, and this classification is as follows:
• A material whose viscosity decreases under pseudoplastic shear stress but remains constant over time,
• Material whose viscosity decreases under thixotropic shear stress and then continues to decrease over time,
• Bingham plastic, material where the transition from high viscosity (almost semi-solid) to low viscosity (mainly liquid) occurs only after the shear stress has exceeded a minimum value,

Materials that thicken when processed or shaken are called shear thickening fluids. An example often shown in science classes is a dough made from cornstarch and water mixed in the right proportions. The resulting strange sticky substance behaves like a liquid when squeezed slowly and a flexible solid when squeezed fast.
Shear thickening fluids are also divided into two groups: those with time-dependent viscosity (memory materials) and those with time-independent viscosity (non-memory materials). If the increase in viscosity increases with time, the material can be said to be rheopectic. If the increase is roughly proportional to the shear stress and does not change with time, the material is dilatant.

Why is Viscosity Important in Daily Life? 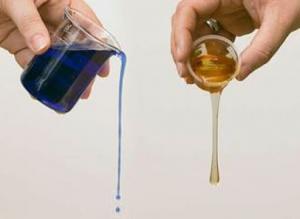 Although viscosity may seem insignificant in daily life, it can actually be very important in many different areas. Some examples of this are as follows:
• Lubrication in vehicles: most people are aware of its viscosity when they put oil in their vehicle. This is because viscosity affects friction, and friction affects heat. Viscosity also affects the oil consumption rate and the ease of starting the vehicle in hot or cold conditions. Some oils have a more stable viscosity, while others react to heat or cold. If the oil has a low viscosity index, it can thin as it warms up, which can cause problems when starting the vehicle on a hot summer day.
• Cooking: Viscosity plays an important role in the preparation and presentation of food. Cooking oils may or may not change viscosity as they heat up, but many become more viscous as they cool. Oils that are moderately viscous when heated become solid when cooled. Different cuisines also rely on the viscosity of sauces, soups and stews. For example, a thick potato and leek soup becomes French viscosity when it is less viscous. Some viscous liquids add texture to foods, for example honey is highly viscous and can change the mouthfeel of a meal.
• Manufacturing: Proper lubrication is required for the smooth operation of production equipment. Lubricants that are too viscous can compress and clog pipelines. Lubricants with a very thin structure have very little protection in moving parts.
• Medication: Viscosity can be critical in medicine, as fluids are administered intravenously into the body. Blood viscosity is a major issue: blood that is too viscous can form dangerous internal clots, while blood that is too thin won’t clot, which can cause dangerous blood loss or even death.

Viscosity is first and foremost a function of the material. The viscosity of water at 20 °C is 1.0020 millipascals per second, which is suitably close to one by chance alone). Most ordinary liquids have viscosities of 1 to 1,000 mPa s, while gases have viscosities of 1 to 10 µPa s. Pastes, gels, emulsions and other complex liquids are more difficult to summarize. Some oils, such as butter or margarine, are so viscous that they look more like soft solids than runny liquids. Molten glass is extremely viscous and approaches infinite viscosity as it solidifies. Because the process is not as well-defined as real ice cream, some believe the glass may leak even after it has completely cooled, but this is not the case. At normal temperatures, glasses are as solid as real solids.
From everyday experience it should be common knowledge that viscosity changes with temperature. Honey and syrups can be made more fluid when heated. Engine oil and hydraulic fluids thicken visibly on cold days and significantly affect the performance of cars and other machinery during the winter months. In general, the viscosity of a simple liquid decreases with increasing temperature. As the temperature increases, the average velocity of the molecules in the liquid increases and the time they spend in contact with their nearest neighbors decreases. Thus, as the temperature increases, the average intermolecular forces decrease. The way the two quantities change is not linear and changes abruptly when the liquid changes phase. Viscosity is normally independent of pressure, but fluids under extreme pressure often experience an increase in viscosity. Since liquids are normally incompressible, an increase in pressure will not bring the molecules significantly closer together. Simple molecular interaction models do not work to explain this behavior, and to the best of our knowledge, there is no more complex model generally accepted. The liquid phase is probably the least understood of all the phases of matter.
Gases thicken, while liquids become fluid as they heat up. The viscosity of gases increases with increasing temperature and is approximately proportional to the square root of temperature. This is due to the increase in the frequency of intermolecular collisions at higher temperatures. Because molecules in a gas often fly freely in vacuum, anything that increases the number of times one molecule comes into contact with another reduces the ability of the molecules as a whole to act in a coordinated fashion. The more these molecules collide with each other, the more erratic their motion becomes.

The mathematical expression describing the flow of fluid in circular tubes was coined by the French physician and physiologist Jean Poiseuille (1799-1869). Since it was also independently discovered by the German hydraulic engineer Gotthilf Hagen (1797-1884), it should be known precisely as the Hagen-Poiseuille equation, but it is often referred to as the Poiseuille equation.