Studies on the vestibular system have led to new experimental studies, clinical examinations and the development of effective treatments for a number of diseases in this system. In particular, vestibular paroxysmal position disorders of peripheral and central origin have been studied. The main criteria have been determined for the differential diagnosis of these disorders. Vestibular dysfunction in channelolitiasis and cupololithiasis has been investigated clinically and histologically.
Three types of effective therapeutic and prophylactic positional maneuvers have been put into practice in clinical practice and have been developed taking into account the anatomical and physiological characteristics of the vestibular system. Currently, only 20% of vestibular reactions are predicted in the horizontal plane, especially using the electronystagmography test (ENG). [nedir3]
Videonystagmography (VNG) allows video recording of the nystagmus in the semicircular canals (vertical, diagonal, horizontal) directions. Vestibular evoked myogenic potential testing (VEMP) is widely used in clinical practice. Magnetic coils and scanning laser ophthalmoscopes are becoming increasingly important in the examination of patients.

General View and Anatomy of the Vestibular System

The vestibular system (VS) is the most mysterious biological system. He was the first to develop during embryogenesis. The vestibular system consists of peripheral and central components that have a complex structure that is not fully understood. Its peripheral components are located in the paired ear labyrinth of the temporal bone pyramid. Its central components consist of the conductive part, the vestibular nuclei in the brainstem, and the cortical representation.
The bone labyrinth is located in the temporal bone. The membrane labyrinth is located in the middle of the bony labyrinth, which resembles the shape of its small cavities. The membrane labyrinth is fixed to the inner wall of the bony labyrinth by means of spiral formations that act as shock absorbers. Therefore, it is kept in relation to the suspended bony labyrinth. The membrane labyrinth consists of the peripheral acoustic part of the cochlea where Corti’s auditory receptor organ is located, as well as the peripheral component of the vestibular system. The peripheral component of the vestibular system is represented by the vestibulum, which contains globular (saccule) and elliptical (utricle) sacs that form the receptor otolith organ. The other three semicircular canals of the peripheral vestibular system are located in the membranous labyrinth.
Each canal has a flat terminal region, which is thickened and enlarged on one side and connects to the vestibulum on the other, resembling bulbs in shape (the bulbs receptor organ). The three semicircular channels are located at approximately straight angles to each other. Therefore, they can detect angular motion performed in any plane or direction. One of the channels is horizontal, the other two (front and back) are vertical. The perception of head movement is achieved by the activation of the right and left semicircular canals in the plane of motion to form functional pairs.
The membrane labyrinth is washed with perilymph fluid, which is similar in chemical composition to cerebrospinal fluid. In the middle of the membranous labyrinth there is an endolymph. It is an intracellular fluid that supplies oxygen, nutrients and hormones to the helix, otolith and bulbs apparatus. The potassium concentration in it is high (144 mmol / L) and the sodium concentration is low (5 mmol / L). The mechanisms of endolymph formation and its circulation in the membranous labyrinth are not fully understood yet. The membrane labyrinth is elastic and can increase in size by 2-3 times, filling all the “cavities” of the bony labyrinth, for example in ascites and other pathological conditions.
In the receptor autolytic apparatus, globular (saccule) and elliptical (utricle) sacs contain covered hairy receptor cells supporting dense layers of cells called crests. These receptor cells are sensitive to linear acceleration. They stretch in response to appropriate irritation. Clusters of neuroepithelial receptor cells of the otolith apparatus located between the supporting cells in the elliptical and spherical sacs intertwine and form loops. Calcium salt microcrystals are found in these rings; They are called otoliths. 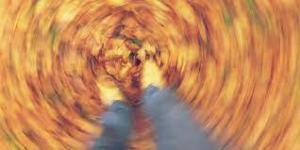 The receptor structures of the bulbs apparatus are located in three semicircular channels (anterior, posterior and horizontal) in mutually perpendicular planes. The straight ends of the two semicircular ducts (anterior and posterior) are joined into a single duct that enters the utricle. It is connected with the receptive auditory structures of the Corti organ. The endolymph produced by the vascular strip of the helix passes through this canal into the vestibular endolymphatic ducts. As the authors emphasize, this important fact is important for various ear diseases accompanied by vestibular disorders and pathological changes in the temporal bone as well as the brain.
The hair cells of the vestibulum and the bulbs of the three semicircular canals form a receptor potential that transmits signals through synapses (with the production of acetylcholine) to the end regions of the vestibular nerve fibers. Vestibular nerve fibers originate from the vestibular ganglion. It is located deep in the inner auditory canal. This node consists of bipolar cells. The dendrites of these cells penetrate the bony labyrinth through the internal auditory canal opening, approaching the saccule and utricle receptor structures as well as the bulbs semicircular canal receptor structures.
The axons of these cells that join the helix nerve represent the vestibulocochlear (auditory vestibular) nerve, and the VIII cranial nerve. In the internal auditory canal, this nerve meets the facial nerve (VII cranial nerve) that runs into the cavity of the skull; then in the thickness of the rhombic fossa of the medulla oblongata, four pairs of vestibular nuclei enter, they are upper and lower and lateral and medial. Reflex pathways originate from the vestibular nuclei, and these pathways are found in various ways related to different systems and organs in the body. The five ways are:
• Tractus vestibulo-spinalis, where impulses from the vestibular nuclei reach the voluntary muscles of the anterior spinal cord.
• Tractus vestibulo-longitudinalis joins the vestibular nuclei with the nuclei of III, IV and VI cranial nerves, resulting in responses generated by the oculomotor nerves – nystagmus variants.
• Tractus vestibulo-rebellaris connects the cerebellum with the nuclei.
• Tractus vestibule, -reticularis, produces reflexes in visceral smooth muscles by combining vagus nerve nuclei in reticular formation with vestibular nuclei.