Echinococcus granulosus, also called hydatid worm, is a type of parasite that affects humans and animals. Although there are 12 different genus types of this parasite, it causes zoonotic disease known as echinococcosis (hydatidosis), while four main types are known to cause human parasitic disease. However, these four main types are as follows:
• Echinococcus granulosus (E. granulosus),
• Echinococcus multilocularis,
• Ekinokokkus Vogeli,
• Echinococcus oligarthrus,
Echinococcus granulosus is the causative organism of cystic echinococcosis, a small-sized tapeworm about 2-7mm long with at least 10 different genome patterns and different genetic markers. Generally, adult wolves live in the intestines of dogs that are the definitive hosts. Hydatidosis is one of the epidemic diseases that are dangerous for people in terms of health and economy in many countries of the world known since ancient times. Hydatidosis or echinococcosis single ocular is common in Libya, Sudan, Egypt, Lebanon, Syria, Algeria, Palestine and Iraq, and is common in many Arab countries, including North, East and South Africa, Western and Southern Europe, and South America. Studies show that the disease has spread in previously completely destroyed regions such as North America and Canada.

Echinococcus granulosus has three different stages of development; are eggs, larvae and adult worms that are small and do not exceed 7 mm in length and live adjacent to the mucous layer of the small intestine of the definitive hosts. They reach the adult stages of sexual maturity in about 5-4 weeks. The adult worm has a spherical cap 0.3mm in diameter with a short neck and three types of linked segments. The head includes four side suckers and two rows of barbs ranging from 50 to 28 forks. The section following the head contains the immature genitals, while the middle section contains the mature testicles and ovaries, and is located in the middle of the genital opening. The third segment is called the gravid segment, it contains a branched uterus and has 15–12 branches containing about 1000 eggs. The adult parasite lives in the small intestine of a definitive host and produces eggs containing infective oncospheres. Later, the free eggs as well as the cestode segments are expelled into the environment through the host’s faeces. 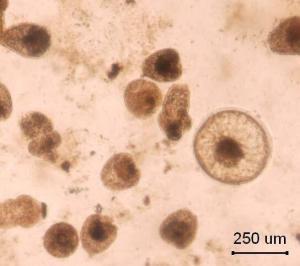 Following oral egg uptake by an intermediate host, a larval migration begins along the blood and lymph vessels. After that, a larval stage (metacestode) develops in many internal organs, primarily the liver and lungs. Typically, multiple protoscolexes are produced by the mature metacestode, each of which has the potential to transform into an adult sesto after oral intake by a suitable definitive host. This parasite also has e. They live in the intestines of carnivorous dogs, foxes, leopards, lions and hyenas, which are the definitive hosts of granulosus and the parasite (adult). In addition, herbivores, which are intermediate hosts of the parasite where the larvae (hydatid cyst) live, are sheep, goats, camels, cows, buffalo, horses, donkeys, pigs, rabbits and humans.

The eggs are spherical in shape, about 40–30 m in diameter, and are similar in appearance to the eggs of other tapeworms. It contains a hexacanth or oncosphere embryo because the embryo has sixth hooks. The eggs are surrounded by transparent coatings, the eggs contain a sticky layer that adheres to the animals’ feathers and other things, which helps them spread. In optimum conditions, eggs survive weeks or months in pastures and gardens, while remaining viable at the right humidity and moderate temperatures. The eggs are found in water and wet sand for 3 weeks at 30 ° C and 225 days. 32 days at 6 ° C and 10–21 ° C, also the eggs remain for a short time when exposed to sunlight and dry conditions. They kill the eggs when exposed to 3.75% sodium hypochlorite for 10 minutes and are also killed when frozen. This occurs with temperatures greater than – 70 ° C for 4 days or -80 ° C for 2 days or 60 ° C for 3 minutes.

When intermediate hosts (livestock) or humans (random hosts) swallow eggs, the embryo (oncospheres) hatch and become active, delivered via the bloodstream to the liver or other organ. As soon as the hexacant embryo reaches its precise location, it transforms into a single ocular hydatid cyst that grows in the inner layer of the hydatid cyst and produces juvenile cysts or protoscolexes.

Transmission to humans is caused by the fecal-oral route when eating food and water contaminated with parasite eggs. These eggs are excreted through the feces of certain hosts such as dogs, hand contamination with eggs found in contaminated soil or sand. Determinative hosts become infected with adult worms when they feed on hydatid cysts found in the organs of the intermediate host, such as infected sheep.

Echinococcus granulosus is named according to their intermediate parent names as well as various strains are distinguished. The life cycle of these strains provides a high degree of adaptation to the host species they have. According to the species they host, the strains vary according to their shape, rate of development, pathogenicity and geographical scope of their presence. All of these species fall under the echinococcus granulosus species, while G1 is found in sheep, G2 in Tasmanian sheep and G3 in buffaloes. And the attaki species G4 is therefore called echinococcus equinus and in cows G5 is called echinococcus ortleppi. In addition, G6 in camels, G7 in pigs, and poorly characterized G9 were isolated from cystic disease in human cases in Poland. G7, G8, and G9 can enter echinococcus canadensis, and some researchers consider the G9 strain to be a type of G7 strain in pigs. 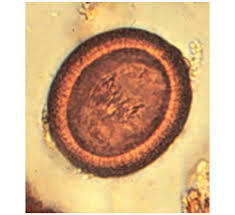 Classification of the genus Echinococcus has long been controversial, based on the difference in the parasite’s structural and phenotypic characteristics, 16 species and 13 subspecies of this genus have been identified based on the characteristics of the host and species. However, only 4 of them are considered taxonomic and they are as follows:
• Echinococcus granulosus,
• Echinococcus multilocularis,
• Echinococcus oligarthrus
• Echinococcus vogeli,
However, the echinococcus granulocytic parasite parasite has a classification system and these are as follows:
Kingdom: Animalia
• Şube: Platyhelminthes
Super class: Eucestoda
• Class: Cestoda
• Subclass: Cestoda
Order: Cyclophyllidea (I; Braun, 1900)
• Aile: Taeniidae (Ludwig, 1886)
• Cins: Echinococcus (Rud, 1801)
• Door: granülöz (Batsch, 1786)

The adult stages of Echinococcus granulosus live in the mucous layer of the definitive host’s small intestine, and the eggs are highly resistant to harsh environmental conditions for several months or even a year depending on the environmental conditions. Therefore, it remains a source of infection to intermediate hosts, especially in children when drinking contaminated water and food, including humans who may become infected through contact with infected dogs. Whereas, eggs stick to dog hair around the anus. The eggs reach the stomach of the intermediate host and then decompose the digestive juices and the chitinous cortex and release the embryo (oncospheres) of the sixth hooks. While the oncospheres penetrate the intestine and reach the liver, lungs and other organs including the brain, the muscles turn into hydatid cysts at the end of about 5 months. When the definitive host feeds on the infected organs of the intermediate host, the parasite reaches the small intestine. Here the primary heads turn into adult worms within 7-4 weeks, and each worm produces thousands of eggs per day, restarting the cycle.
Adult echinococcus granulosus (sensu lato) (2-7mm long) resides in the small intestine of the definitive host. Gravid proglotids release eggs that pass through feces and are immediately infectious. After ingestion by a suitable intermediate host, the eggs hatch in the small intestine. It releases six-hooked oncospheres that penetrate the intestinal wall and migrate throughout the circulatory system to various organs, particularly the liver and lungs. In these organs, the oncosphere transforms into a gradually expanding thick-walled hydatid cyst producing protoscolic and daughter cysts that fill the interior of the cyst. The definitive host becomes infected by ingesting the cyst-containing organs of the infected intermediate host. After ingestion, the protoscolics come out, attach to the intestinal mucosa and develop into adult stages within 32-80 days. Humans are abnormal intermediate hosts and become infected when the egg is swallowed. Oncospheres are released in the intestine and hydatid cyst develops in various organs. If the cysts rupture, protoscolics that are released can form secondary cysts in other areas of the body, and this is called secondary echinococcosis.