An electrolyzer is a device that produces hydrogen through a chemical process (electrolysis) that can separate the hydrogen and oxygen molecules formed by water using electricity. This is hydrogen produced sustainably, that is, without releasing carbon dioxide into the atmosphere, a device that could even be the foundation of a decarbonized economy.
Electrolysis may at first sound like a high school lab experiment with a beaker, a few cables, and a few batteries. But the effect of this process, which allows the molecules, in this case water molecules, to break down using electricity, is the key to obtaining green hydrogen.

Hydrogen is the most abundant element in the universe and therefore can be the perfect fuel. But that’s not the only reason: no carbon dioxide is produced when hydrogen is burned; instead, water vapor is produced. Its use in this way will greatly reduce the emissions responsible for the greenhouse effect and global warming. The challenge lies in the fact that electrical energy is needed to produce hydrogen, and if that energy comes from fossil fuels, emissions are created. In contrast, the production of the substance known as green hydrogen relies on the use of renewable energies to power the electrolysis process, thereby obtaining hydrogen from water. The machine responsible for this process is called an electrolyzer.

How Does the Electrolyzer Work?

An electrolyzer is a device that can split water molecules into its constituent oxygen and hydrogen atoms. The bonds between the two elements are very stable and electrical energy is required for this cleavage to occur in a process called electrolysis. Efficient electrolyzers will be key to hydrogen penetration and adoption of hydrogen fuel cells in industries.
One of the world’s largest electrolyzers is located in Fukushima, Japan, where the famous nuclear disaster occurred, symbolizing a paradigm shift in power generation as it is powered by solar panels. Most recently, in January 2021, the Japanese electrolyser far outstripped the one in Bécancour, Canada, consisting of a polymer membrane device with a production of 8.2 tons per day.
Electrolysis was first discovered in 1800, the same year after the invention of the electric battery by Alessandro Volta, other chemists tried to connect their poles to a vessel of water. They later discovered that the current passed through the water and hydrogen and oxygen were separated at the electrodes.
An electrolyzer consists of a stack of conductive electrodes separated by a membrane to which high voltage and current are applied. This causes an electric current in the water that causes it to split into its components: hydrogen and oxygen. The complete system also includes other ancillary components such as pumps, power electronics, gas separator and storage tanks.
Oxygen produced in parallel is released into the atmosphere or in some cases can be stored for later use as a medical or industrial gas. Hydrogen is stored as a compressed gas or liquefied for use in industry or hydrogen fuel cells that can power transportation vehicles such as trains, ships and even airplanes. 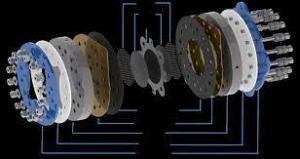 Today, there are different types of electrolysers, depending on their size and function. The most commonly used are:
alkaline electrolyzer
alkaline electrolyzer; It uses a liquid electrolyte solution such as potassium hydroxide or sodium hydroxide and water. Hydrogen is produced in a cell consisting of an anode, cathode and membrane. Cells are often assembled in series to produce more hydrogen and oxygen at the same time. When current is applied to the electrolysis cell stack, hydroxide ions move through the electrolyte from the cathode to the anode of each cell, creating bubbles of hydrogen gas on the cathode side of the electrolyser and oxygen gas at the anode. They have been used for over 100 years and do not need noble metals as catalysts; however, they are bulky equipment that obtains hydrogen of medium purity and is not very flexible in operation.
Proton exchange membrane (PEM) electrolyzer
PEM electrolyzers use a proton exchange membrane and a solid polymer electrolyte. When current is applied, hydrogen and oxygen combine at the cathode side to form hydrogen gas, with the membrane passing through the hydrogen protons, splitting the water. They are the most popular because they produce high purity hydrogen and are easy to cool. They are most suitable for adapting to the variability of renewable energies, are compact and produce high purity hydrogen. On the other hand, they are slightly more expensive as they use precious metals as catalysts.
Solid oxide electrolysis cell (SOEC) SOECs operate at a higher temperature (between 500 and 850 ºC) and have the potential to be much more efficient than PEMs and alkaline electrolysers. The process is called high temperature electrolysis (HTE) or steam electrolysis and uses a solid ceramic material as the electrolyte. Electrons from the external circuit combine with water at the cathode to form hydrogen gas and negatively charged ions. The oxygen then passes through the sliding ceramic membrane and reacts at the anode to form oxygen gas and generate electrons for the external circuit. They are less technologically advanced than the above.
There are other types of electrolyzers that are not yet as efficient or cost-effective as the above types but have a lot of potential for improvement, for example photoelectrolysis. This species also uses the single sunlight of water molecules without the need for electricity. However, this device requires semiconductors that have not been developed enough yet.