While most children or adults do not have bedwetting problems, some children overcome this problem over time. For this reason, most treatments are delayed until the child is at least seven years old. However, if the situation is perceived to be detrimental to the child’s self-esteem or relationships with family and friends, treatment may begin sooner.
There are some treatment approaches when treating bedwetting. These vary depending on the person’s condition, cause and frequency. Treatment options are as follows;

When treating bedwetting children, parents may be advised to:
• Make sure that the child’s bladder is emptied thoroughly before going to bed,
• improving the child’s access to the toilet; for example, to allow him to sleep on his lower bed and to have a seat within his reach,
• Using waterproof covers on mattresses and duvets (especially for boys), followed by absorbent sheets on the bedspread.
To give the child a shower / bath in the morning before going to school to relieve odor.
• restricting fluids; The child should drink about eight drinks a day, intermittently throughout the day, the last one about an hour before bedtime. Caffeine should be avoided in night food and drinks (eg tea, coffee, cola, chocolate).
• Constipation, if any, should be treated. 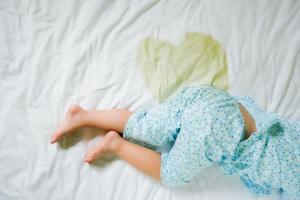 • Reward systems should be established. It is recommended to use positive reinforcement to encourage a desired behavior. The aim is to positively reinforce dry nights (or any step towards it) and reduce the negative emphasis on wet beds.
• Scheduled waking up is preferred to “lifting” the child. Scheduled waking involves waking the child periodically (one to three times) at night and taking them to the toilet to urinate. Eventually, the time between wakings is extended until the child has a full night without wetting the bed. Lifting is thought to be counterproductive in some children, as the child is deprived of the opportunity to learn about the feeling of a full bladder and is encouraged to urinate before waking up.
• Older people can use an alarm clock to wake themselves up before normal enuresis hours.

When to Consult a Doctor?

If more active treatment is desired after the initial recommendation, then referral to a pediatrician, enuresis clinic (if available in your area) or a continence counselor may be the next step in developing the program that best suits the child. The program generally focuses on the use of bed alarms.
Supported Bed Alarm Programs
Enuresis alarms make a loud sound when moisture is detected, so the child wakes up as soon as they start wetting the bed. They are considered a long-term and safe treatment. Bed alarms have a 65 to 80% success rate when used with support (such as an enuresis nurse) and the child is motivated to dry. 4 They help “condition” the child to wake up when the bladder is full. Efficacy is better than behavioral treatments alone, and relapse rate is lower than pharmacological treatments.
Alarms are usually needed for three to five months. When dryness is achieved at night for 14 nights, children should be encouraged to drink extra fluids (up to 500 mL of water per hour before bedtime) and continue until there are seven to 14 consecutive dry nights. This form of challenge is used in conjunction with the bed alarm and is known as “over learning”. This reduces the relapse rate from 50% to 25%. Children who have relapsed should be offered a re-assisted alarm program immediately.
Desmopressin
Desmopressin is a synthetic analogue of ADH and is the only antidiuretic drug available. It works by reducing the volume of urine produced at night, but it does not cure this problem in the long term only at night when it is used. In most cases, it will be appropriate to try out a bed alarm program before considering this medication.
Safety concerns regarding desmopressin In April 2007, the UK Medicines and Healthcare Products Regulatory Authority (MHRA) issued a drug safety alert stating that hyponatremia, water poisoning, and convulsions are associated with the use of desmopressin nasal spray. Following this, the indication for nocturnal enuresis was withdrawn from desmopressin nasal spray in the UK.
In December 2007, US drug regulators stated that the FDA no longer approves desmopressin nasal spray for use in nocturnal enuresis after two deaths, and a review of data showing that 41% of seizures due to hyponatraemia occur in people younger than 17 years of age. Desmopressin is most commonly used for primary nocturnal enuresis. The BNF 2008 states: “The Drug Safety Committee recommends that patients stop taking desmopressin during a vomiting or diarrhea event (until fluid balance returns to normal). The risk of hyponatremic convulsions can be minimized by following the recommended starting dose. And this should be done by avoiding the simultaneous use of drugs that increase vasopressin secretion, for example, tricyclic antidepressants.
Occasional short-term use of desmopressin

Desmopressin intranasal spray is currently available fully funded on expert advice. Tablets are currently not funded. GPs may be asked to consider prescribing desmopressin for short term use such as school camps or residents. Desmopressin can also be offered in addition to alarm therapy if needed to help the family cope.
A Cochrane review of desmopressin concluded that it was effective in reducing bedwetting compared to placebo. When desmopressin is used, most children experience fewer wet nights (less than an average night a week) and more become dry (19% compared to 2% using placebo therapy in five studies of 288 children). The usual dose of desmopressin is 20 to 40 micrograms intranasally at bedtime or 200 to 400 micrograms orally. Fluid intake should be limited at least eight hours after an hour before the dose, and patients or parents should be instructed to report symptoms of water retention and hyponatraemia (e.g. headache, nausea, vomiting, weight gain or convulsions).
There are insufficient data to reliably assess whether a higher dose is more effective than a lower dose, so the lowest effective dose should be used to minimize side effects and costs.