Cells can sometimes have errors in their DNA, called mutations, that can lead to various diseases. Cancer cells are mutated cells that have lost their ability to control their growth. These cells can divide rapidly and spread to other parts of the body. Scientists take advantage of this property of cancer cells to try to design various treatments to kill only cells that divide rapidly.
So what happens if cancer cells grow slowly or stop growing? Recent evidence suggests that these types of cancer cells exist. These cells, also called cancer persistents, are usually non-growing cells and cannot be easily eliminated with conventional cancer treatments. This article provides information on what cancer patients are and why a significant effort should be made to examine them. Cancer is one of the leading causes of death, and many scientists work hard to find new ways to cure cancer. It is estimated that there will be ~ 1.8 million new cases of cancer and about 600,000 cancer deaths in the United States alone in 2020. In 2015, approximately USD 80.2 billion was spent for cancer-related medical expenses. However, there is no single known cure for cancer. So what is cancer and why is it so difficult to treat?
Cancer is a group of diseases that can be seen in various organs or tissues of the body. Cells in cancer tissues divide at unusually high rates, and these cells can spread to other parts of the body through the blood and lymph systems in a process called metastasis.
These abnormally growing tissues are also called tumors. Every moment millions of cells in the body divide and die. However, cell death and division rates are generally under the strict control of certain proteins. Cancer is usually caused by mutations.
Environmental factors such as chemicals in tobacco or ultraviolet rays from the sun can contribute to these mutations in the occurrence of errors in DNA. DNA carries information on how to make all the proteins of a cell; therefore, mutations in DNA can result in abnormal proteins. If proteins that regulate cell growth mutate, their wrong versions can cause abnormal cell growth and lead to cancer. 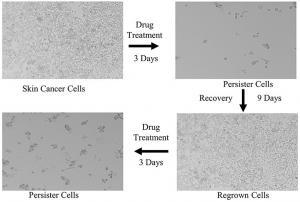 There are more than 200 different types of cancer, and each type causes a different mutation. Also, because cancer cells divide very quickly, they are more prone to mutation. Therefore, it is difficult to design a single treatment for all types of cancer. Most common treatments for cancer target fast-growing / dividing cells because fast cell division is one of the most important features of cancer cells.

What Are Cancer Persister Cells?

But what if some of the cancer cells stop growing or remain dormant? Recent studies have shown that a small subpopulation of cancer cells basically stops growth in the presence of anti-cancer drugs.
Since cancer drugs do not grow, they do not attack these cells. However, when the patient no longer takes the medications, the asleep persistence wakes up and begins to grow again. This made it extremely difficult to eradicate cancer completely.
Melanoma (skin cancer) cells were treated for 3 days with a very high concentration of the drug called gemcitabine. After 3 days, surviving persistent cells were harvested and regrown in a drug-free medium. The re-grown cells were then reprocessed to test their sensitivity to the drug. You can see that the stubborn cells can regrow and form daughter cells after the drug is removed. As expected, daughter cells became highly drug sensitive when treated again.
How do some cancer cells persist? Lack of nutrients and oxygen can leave some cancer cells dormant. Anti-cancer drugs can also trigger drowsiness in some cells. This raises another question: If drowsiness can help cancer cells recover from treatments, why do only some cells stay dormant? Wouldn’t it be beneficial for all cancer cells to be persistent? One of the reasons why some cells become permanent is that cancer cells are so diverse.
Basically, cancer cells have different observable characteristics, similar to how each person has their own personality. This means that each cancer cell may differ slightly from the rest of the cancer cell population. For this reason, there may be some proteins in some cells that allow them to go to sleep, while others are unfortunately not.

Before discussing how stubborn cells survive drug treatments, we first need to understand the differences between resistant cancer cells and permanent cells. Remember how we talked about DNA mutations that can cause cancer by disrupting cell growth? Resistant cancer cells are tumor cells with additional mutations that allow them to survive drug therapy and continue to grow even in the presence of the drug. These cells, upon cell division, can form new cells called daughter cells.
Cells formed after a cell undergo cell division and are resistant to the drug. On the other hand, persistents do not grow or grow too slowly during drug therapy. When the persists begin to divide, they form daughter cells that are sensitive to the anti-cancer drug. This means that, unlike resistance, the survival mechanism of a persistent cannot be transmitted through cell division.
Therefore, it is known that permanent cells survive drug therapy because they are temporarily dormant. However, there may be other mechanisms that help these permanent cells survive drug therapy. What could these mechanisms be? One possibility is that persistent pushes drugs out of the cell at a higher rate than non-persistent ones. Or persistent can repair damage caused by medications more efficiently. Recent research has shown that permanent cells may contain special enzymes.
These enzymes help the persistent to recover from a variety of stresses including medications in their environment. These findings are an important step towards understanding how permanent cells work. Many more studies are still needed before we can have a clear understanding of the Persisters. However, to carry out these studies, we have to overcome some obstacles, one of which is to be able to separate permanent cells from “normal” cancer cells.

How Do Persister Cells Function?

The first step in examining the persister cells is isolating them from normal cancer cells. How does it achieve this? Well, it can cure cancer cells with medication for a long time. This treatment should kill normal cells but not continue. After the treatment, we remove the drug and regrow the permanent cells in a fresh environment without medication. Persister cells eventually awaken and multiply to form daughter cells. He can then treat the daughter cells with medication and test whether they are susceptible to treatment.
If the daughter cells are drug sensitive, then one can conclude that the cells originally isolated were not resistant mutants. This verification step is important because it should be noted that, unlike resistant mutants, persisters’ daughter cells are drug sensitive. This method of isolation of the persistors is very common. After isolating the persists, we can do a lot of interesting studies: we can examine their functioning, including their metabolism; can watch how and when they wake up. And these can also be used to find new, more effective anti-cancer drugs.

Why Persisters Should Be Reviewed?

So why is it desirable to learn about persisters? One of the main reasons for working on persistents is to reduce the recurrence rate of cancer. There are many cases where cancer patients receive expensive and painful treatments. Sometimes doctors come to the conclusion that the treatment is successful; however, sometimes the cancer can come back after a while.

Persians are believed to be one of the main causes of cancer reoccurrence. Persistors have been shown to exist in various types of cancer, including but not limited to breast, lung, and skin cancer. These are some of the most common types of cancer, and they all have a high risk of recurrence.
The cancer treatment currently available has progressed compared to a few decades ago. This is thanks to all the scientists and research groups devoted to studying this topic. Unfortunately, with every new cancer-related discovery we find, we also encounter new cancer-related complications. The presence of persistors is undoubtedly one of the biggest flaws in cancer treatment.
We need more researchers who can study permanent cells to answer the many questions associated with them. If all the properties of the persister cells are not clearly understood, full cure of cancer will remain a very difficult dream to eradicate.