The supply of thoracic organs can be divided into two main categories as brain death donation (DBD) and after determination of heart death donation (DCD). DCD is a relatively new and promising field helping to address donor shortage with the help of the latest advances in medical technology. However, DBD remains the most important means of organ donation. There are several different combinations of breast removal surgeries such as heart, double lung, single lung and these are as follows:
Single lung, heart-lung en block for transplantation,
Supply of Double Lungs for bronchial artery revascularization,
Supply of Heart and Lungs in DCD donors with OCS,
Supply of NRP or Lungs for Ex-Vivo Lung Perfusion (EVLP)
It is also believed to be 50% of the purchase and transfer operation and deserves the necessary attention. It is often assigned to a small member of the team and consequently affects the outcome due to the relevant learning curve. 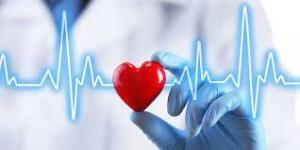 The DCD only heart delivery process with the organ care system (OCS) is a relatively new technology. It is essential to ensure that two surgeons are present for this procedure as part of the field team. This is because the technique will become more relevant as the discussion progresses. After checking the patient’s hemodynamic status, drips, lactates, troponins, echo and other vital parameters, the donor center is taken to follow the traditional checklist. These include, but are not limited to, blood groups and checked UNOS IDs. At this point, the purchasing team and the local organ procurement organization have information about the local institutional and hospital protocol.
The donor team parks the transmedics organ care system (OCS) in one of the corners of the operating room, plugs power in, prepares the equipment, and ensures a green signal is given to every object, tool and machine. The patient is prepared and covered in a sterile way and all lines are removed. Cardioplegia rises suddenly and is ready to be infused in a short time. Ensure that there is a working sternal saw, a sternal retractor, and the appropriate aortic cross clamp. Finally, make sure that there are 2 working and connected suction. 30,000 units of heparin are given intravenously into a central vein in the donor approximately 3-5 minutes before care ceases. The donor procurement team is then ready while waiting in the sterile aisle. Upon withdrawal of life support, the organ procurement organization coordinator communicates the donor’s arterial blood pressure and pulse oximetry hemodynamic status to the team every 5 minutes. It is done because there is no set or accepted timing for the DCD heart.
Generally, a waiting time of 18-23 minutes is acceptable. Beyond this time, the cardiac team thinks there is a prolonged ischemia phase and therefore the waiting time is limited to 23 minutes. In total, the mandatory 5 minutes after cessation of electrical activity before the patient is pronounced, and 1-2 minutes before the team is allowed to begin, ie the total time is approximately 30 minutes, and this is the time interval during which the cardiac team is prepared. While the liver team usually waits 30 minutes, the lung team has a further allowable waiting time of up to 60 minutes. The surgical team then goes inside with all the instruments already on a side table next to the operating table. Using a knife, an incision is made up to the bone, and the next item is sternal retraction. After the sternotomy is done, the retractor is inserted and the pericardium is opened in the midline using forceps and scissors. At this point, the heart is exposed and the right atrium cannulated with 32 French venous cannulae, which is then connected to the blood collection bag given to the perfusion team member. Then, 1100 cc of blood and 800–1100 cc of blood are taken from the donor.
Meanwhile, a purse string and a cardioplegia needle are placed on the aorta. After blood draw is complete, the aorta is cross-clamped and then cardioplegia is infused as standard. 2 L cardioplegia is given to the aortic root and then the chest is filled with ice. The IVC (inferior vena cava) is vented and cut at this point at the end of the left atrial appendage, from which point the supply proceeds in a standard manner. IVC is cut at the point accepted by the liver and heart team. After cardioplegia is complete, the pulmonary vessels are graded anteriorly, the IVC procedure is completed, the pulmonary arteries divide beyond the bifurcation of the IO at the level of the aortic arch. The superior vena cava (SVC) is divided as high as possible above the azygous vein level and finally the heart is explanted, then placed on the back table. There, instrumentation is done to insert the heart into the OCS machine.

Bronchial artery revascularization was performed to alleviate the achilles heel of lung transplantation, which provides bronchial healing. This has been an intense area of ​​focus, especially since the early problems lung transplantation had with tracheal detachment and bronchial opening. However, a lot of work has been put into it and has not yet been adopted as an important implementation standard. There are several proponents of this technique that produces excellent results. One of these groups is Professor Gosta Pettersson, who has been working on it for a long time since his days in Denmark, supported by the Cleveland Clinic. Also, Professor Gosta Pettersson has trained several surgeons at the Cleveland Clinic with this approach. As is known, the lung has a double blood supply, one from the bronchial arteries and the other from the pulmonary arteries. 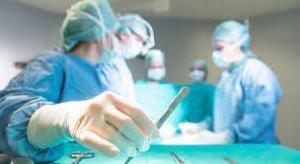 The main idea of ​​the BAR procedure is to supply the lungs as they normally are, but also to protect the bronchial arteries from their origin in the aorta. To achieve this, the lungs are removed en bloc as in a standard procedure with the trachea intact, this time the thoracic esophagus and the descending aorta accompany them. In this way, the right intercostal bronchial artery and left bronchial arteries are included. After IV heparin administration, the donor aorta is cross-clamped and cold lung perfusate is administered through the pulmonary artery (PA), also normally the lungs are washed with 4-6 L perfadex. On the back table, 4 liters of perfadex is used for antegrade perfusion and then 1 liter of perfadex for retrograde perfusion and one liter of perfedtex should be infused into the descending aorta.
A cross clamp should be placed in the aortic arch to prevent escape of the solution. This ensures perfusion of the bronchial arteries originating from the descending thoracic aorta. The NG tube is retracted before the esophagus is stapled, but it should not be completely retracted because it is still important to hold it in the esophagus. And this is to ensure that the NG tube is not stapled into the esophagus. Then you need to go to the aorta and transection at the level of the diaphragm. The esophagus should also be stapled as high as possible above the neck to prevent spillage. However, it should not be forgotten that the dissection around the trachea should be tried to be minimized and the trachea should be stapled as high as possible. Finally, the double lung block and accompanying tissue are removed from the donor while moving cranially. Make sure to include paraspinal tissue to minimize the possibility of injury to the bronchial arteries. The PA is divided near the bifurcation and the adequate left atrial cuff is removed as standard. 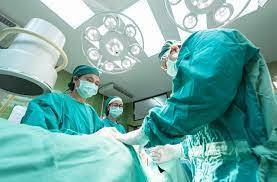