Ectopic pregnancy, abortion, and pregnancy trophoblastic diseases (GTDs) are the most common conditions that can cause maternal death in the first trimester due to the possibility of severe bleeding, shock or sepsis. Patients usually present with bleeding or pain, but may remain asymptomatic for a long time. In some cases, especially in some cases of ectopic pregnancy and abortion, patients do not even realize they are pregnant. Ultrasound imaging is extremely useful for obtaining an accurate diagnosis for these first trimester conditions.
Therefore, it is important to exclude early pregnancy pathology in any woman of reproductive age presenting with amenorrhea, abnormal bleeding, or pain using diagnostic ultrasound imaging in conjunction with beta human chorionic gonadotropin (HCG). In terms of perinatal mortality, the role of ultrasound imaging in detecting markers for chromosomal abnormalities and structural defects in the fetus is crucial to providing early intervention or close monitoring. 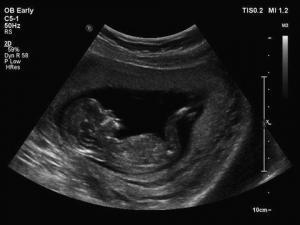 HCG and ultrasound complement each other in the evaluation of suspected ectopic pregnancy. Transvaginal sonography (TVS) can reliably determine the intrauterine gestational sac when serum HCG is 1000mIU / ml, and transabdominal sonography (TAS) when the HCG level is 1800-3600mIU / ml. Thus, TVS detects a normal or abnormal intrauterine gestational sac earlier than TAS. With TVS, the transducer is closer to the uterus and adnexa and allows higher frequencies to be used because there is less tissue interface with less beam scattering and the effect of abdominal wall fat is avoided (details of the TVS technique are described elsewhere)
In the sonographic diagnosis of ectopic pregnancy, TVS can only reveal a thickened decidualized endometrium. In more advanced ectopic pregnancies, decidual sagging with fluid or blood that arises in the cavity can lead to the formation of a small irregular intrauterine structure called the so-called sac. Diagnostic accuracy is further enhanced by the use of transvaginal color Doppler sonography (TV-CDS) compared to TVS alone, which detects an increased peritrophoblastic flow over color Doppler at the implantation site.
In a patient with positive end-HCG without sonographic evidence of intrauterine pregnancy, the presence of an adnexal mass suggests ectopic pregnancy with a positive predictive value of 70% to 75%. In some cases, an echogenic adnexal ring known as the tube ring will be seen separately from the ovary. The tube ring was detected in 68% of tubal pregnancies without rupture using TVS and is with a positive predictive value of 100%. However, the specific diagnosis of ectopic pregnancy is the demonstration of a gestational sac with an embryo in the adnexa. While 17% to 28% of patients with ectopic pregnancies can detect a live extrauterine fetus with TVS, an examiner should switch to TVS if approximately 10% of TAS findings are insufficient with TAS.
With the TV-CDS, an adnexal peritrophoblastic flow with a spectral pattern of high velocity and low resistance can be demonstrated, separate from the ovary. In addition, the presence of free fluid in the Douglas pouch is a nonspecific finding suggesting the presence of an ectopic pregnancy in an appropriate clinical setting. The amount of fluid and the echogenicity of the fluid are important clues in predicting the presence of a ruptured ectopic pregnancy. Increased echogenicity of large amounts of fluid and fluid is both more indicative of a ruptured ectopic pregnancy. In patients with suspected ectopic pregnancy, the combination of an adnexal mass and echogenic free fluid is associated with a 97% positive predictive value for ruptured ectopic pregnancy. Detecting ectopic pregnancy before rupture will prevent blood loss and related morbidity and mortality. Even when the rupture does occur, early detection with ultrasound imaging will obviously help prevent further blood loss.

It is known that abortion performed in an unsafe environment accounts for 13% of maternal deaths (WHO 2005). Regardless of whether the abortion is spontaneous or voluntary, subsequent events and care received determine whether an abortion is safe or safe. Incomplete abortion can cause bleeding, shock, sepsis, and death if not treated properly. Ultrasound imaging is useful for obtaining a definitive diagnosis, as symptoms of incomplete abortion and ectopic pregnancy may be similar. Furthermore, if a miscarriage is assumed or termination is performed without the initial ultrasound imaging, it may not be known whether the subsequent bleeding and pain complaints are due to remaining conception products, ectopic pregnancy, or even hemorrhagic corpus luteum. 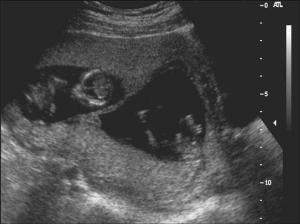 Gestational trophoblastic diseases are a spectrum of benign and malignant trophoblast states, including hydatidiform mole, invasive mole, choriocarcinoma, placental site trophoblastic tumor, and epithelioid trophoblastic tumor. Besides vaginal bleeding or brownish spotting, which is common in early pregnancy conditions, molar pregnancies can occur with a larger uterus, hyperemesis, grape-like vesicle passage to the vagina head, preeclampsia, and hyperthyroidism. Molar pregnancy complications can be life-threatening and include:
Hemorrhage from an existing mole or local invasion
Anemia due to maternal blood loss
Rupture or bleeding into Teka lutein cysts
Pulmonary embolism or pulmonary edema due to the passage of trophoblastic tissue through uterine vessels and
Progression to malignancy 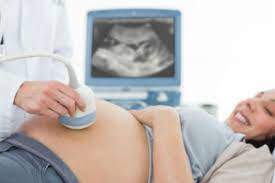 The characteristic sonographic appearance of most molar pregnancies is the demonstration of hydropic villi. The typical sonographic appearance of a complete mole is the appearance of a complex and echogenic intrauterine mass containing multiple small cystic cavities, and this corresponds to hydropic villi in gross pathology. A large, central collection of fluid may also be seen that mimics an anembryonic pregnancy or abortion. Sometimes there is a central mass of variable echogenicity. Color Doppler sonography is used to detect areas of increased blood flow in the myometrium. and can be used as a tool to monitor the effectiveness of chemotherapy.
Although best practice requires histological examination of all pregnancy products from non-viable pregnancies, ultrasound will first determine whether the pregnancy is viable, regardless of the ultrasonographic findings. This does not underestimate the importance of ultrasound in this situation. Second, in rural settings, access to the histological report may be delayed or not available at all. Therefore, ultrasound imaging will assist in initial diagnoses and careful selection of patients with high malignancy risk for histological evaluation, especially in cases where laboratory facilities for histology are not available.

In the first trimester, a patient, especially those who cannot remember their last menstrual period (LMP) or those who do not have a regular 28-day menstrual cycle, can benefit from ultrasound imaging to estimate gestational age (GA). Gestational age has emerged as one of the most important determinants of perinatal mortality. The outcome of pregnancy is more closely related to the gestational age as determined by ultrasound imaging. Accurate GA provides future detection of intrauterine growth restriction (IUGR), greater for gestational age (LGA), and also in decision-making for delivery or premature rupture of membranes (PROM), postdates, placenta previa, hypertensive disorders etc. as. Therefore, the most accurate estimate of GA is made using crown-rump length (CRL) in the first trimester (7-13 weeks gestation) and is even more reliable than using a clinical history. CRL is determined by measuring the maximum straight line distance from fetal head to rump.

Ultrasonography is the preferred diagnostic tool for detecting a multiple pregnancy (as early as five weeks of gestation) using TVS. Perinatal mortality rate in twins is approximately 5 times higher than in singles, higher than monochorionic (5%) dichorionic (2%) twin pregnancies. Again, the prevalence of preeclampsia is approximately 4 times higher in twins compared to singleton pregnancies. Other complications include a risk of miscarriage and premature birth. There is an increased risk of placenta previa, misrepresentation, and placental abruptness. Anemia is three times more common than singles. The risk of atonic postpartum hemorrhage is also much higher in twins. In addition, the risk of operative intervention to the mother increases. Therefore, more surveillance is required in the prenatal period, and early detection with ultrasound imaging becomes a suitable practice.
In the first trimester, dichorionic twins can be easily distinguished by the presence of a thick septum between the chorionic sacs; The septum forms the chorionic component of the inter-twin membrane. This septum becomes thinner as the pregnancy progresses, but remains thicker and is easier to identify as a triangular tissue protrusion at the base of the membrane called a lambda sign. Sonographic examination of the base of the inter-twin membrane for the presence or absence of the lambda sign provides a reliable distinction between dichorionic and monochorionic pregnancies. This definitive diagnosis of chorionicity may not be possible with second and third trimester screenings; Therefore, first trimester screenings are of great importance.