Prototypes of gyroscopes designed by Léon Foucault were mechanical gyros. The typical type of this type of gyroscope is made by hanging a relatively large rotating rotor inside three rings called a gimbal. The basic principle of mechanical gyroscopes is the law of conservation of angular momentum, the tendency of a system’s rotation to remain constant unless it is subjected to external torque. Mechanical gyros are the most common or known type of gyroscope. The bamboo dragonfly fits into this category, which includes any gyroscope that rests on a ball bearing to rotate. Such instruments are often used in navigation of aviation equipment and ships. However, imbalances inherent in the rotor structure may occur due to friction in the support bearings. 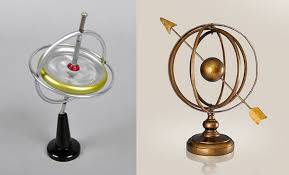 With the advancement of science and technology, new types of gyros based on new principles have come to the fore and found their applications in daily life. They are the most successful, including optical, ring laser, and fiber optic gyros. These devices send two light beams around a circular path in opposite directions. If the road turns, a fringe interference pattern (alternating light and dark bands) is detected depending on the exact rotation speed. They first appeared in the 1960s, following the invention of the laser and the development of fiber optics. Optical gyros have advantages such as excellent measurement accuracy, no moving parts and therefore no friction. The first ring laser gyroscope (RLG) was produced in 1963 by Mecek and Davis. Thanks to their high level of accuracy, low cost, high reliability and easy maintenance, RLGs are perfect for integration into Inertial Navigation Systems. Today, RLGs have drastically changed the mechanical gyroscope predecessors in aircraft autopilot systems and guided missiles for missions where GPS is not safe to use. The global ring laser gyroscope market is expected to reach a market value of US $ 948.3 million by 2026 and grow at a compound annual growth rate of 3.5% in the forecast period 2018-2026.
Fiber optic gyroscope (FOG) is another successful optical gyroscope. It was first proposed in the 1970s, studies were carried out and it was initially thought to be devoted to intermediate level applications. In 1978, McDonald Company developed the first practical FOGs, in 1980 Bergh and his team designed the first all-fiber optic gyroscope. Since then, FOGs have experienced a period of rapid development, angular velocity measurement accuracy has been increased to 0.001 ° / hour, reaching a strategic level of performance, surpassing the ring laser gyroscope in terms of deflection noise and long-term stability. In addition to the absence of moving and wearing parts, FOGs also have the advantages of small size, light weight, wide dynamic range and flexible design. This means that the performance of a fiber optic gyroscope can be adjusted by varying its length and diameter. SISs are now gradually continuing to develop high reliability and long service life towards low cost. FOGs are widely used in inertial navigation systems for attitude measurement and navigation in guided missiles, aircraft and vehicles. Global FOG is expected to grow at a compound annual growth rate of 3.61% in the period 2016-2022.
The MEMS gyroscope is the most successful commercial model for angular velocity sensors and is well suited for mass production while based on micro electrical mechanical systems (MEMS) technology. Taking advantage of advances in MEMS technology, MEMS gyros have their most important advantages, namely they are inexpensive, small and light. It is made of common MEMS gyro-type silicone and has a large object suspended in the air with an anchor or some springs. When a gyroscope is operating, the suspended structure continues to vibrate. Since it undergoes a rotation with respect to the gyroscope reference, a force called the Coriolis force acts on the suspended structure, causing it to move in a direction perpendicular to the direction of vibration. This motion is proportional to the rotational speed and is converted into electrical signals that can be amplified and read by a microcontroller, then the angular velocity is determined. Once the accuracy of MEMS gyroscopes is much lower than competitors such as optical and mechanical gyros, and therefore their applications are limited to low quality. In the last 10-15 years, the sensitivity of the MEMS gyroscope has greatly improved, reaching the tactical level (0.1 ° / hr). It has the benefits of small size, low costs and lightness, and improved sensitivity and environmental stability. For these reasons, MEMS gyro is being applied in more and more fields such as consumer electronic devices, wearable devices, automotive security, personal and vehicle navigation. It is also used in systems, controlling robots, stability control system, video games and toys. The MEMS gyroscope has also entered markets previously dominated by optical gyroscopes and has enabled successful mass-produced commercial productions. 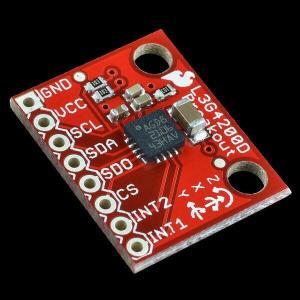 The gyroscope now displays an encouraging momentum for accelerated development. There are many types of new devices based on new principles, new manufacturing process and new materials, such as microscopic hemispherical resonator, surface acoustic wave (SAW), electrostatic (suspended), integrated optics, superfluid, diamond and atomic gyros etc. The field of application of the gyroscope continues to expand rapidly. It covers almost every aspect of human life, from aircrafts to vehicles, wearable medical devices, smartphones to children’s toys. These devices have been humans’ most powerful tools for exploring the environment of life (ocean exploration, space exploration, planet exploration, and even future exoplanet exploration) to improve the quality of daily life. Although the invention of the gyroscope is very old, it still continues to be used as popular today. With the efforts of researchers and scientists, gyros are becoming more and more prosperous and benefit all humanity.

Origins of the Gyroscope

In ancient China, dating back to 500 BC, he invented an interesting toy called the bamboo dragonfly to imitate dragonfly, and this toy has become very popular with children. Since this toy blows up from rubbing it between his hands, it has made it a fun game to see bamboo dragonflies fly the farthest and highest. The bamboo dragonfly is an early type of gyroscope that has a history of more than 2500 years. However, it was named gyroscope in the middle of the 19th century by the French physicist Jean-Bernard-Léon Foucault. Combining two Greek roots, he named his experimental instrument for observing the Earth’s rotation, it consists of a gyroscope, meaning circle or rotation, and a scope, meaning seeing. During his experiment to show Earth’s rotation, he discovered that gyroscopes were able to maintain their original orientation in space regardless of the Earth’s rotation. These unique, premium gyroscopes are excellent sensors for detecting and measuring the angular velocity of a rotating object, the deviation of a vehicle from its desired direction. Since then, this tool has been widely used in autonomous navigation systems. According to Encyclopedia Britannica, the first viable gyroscope was developed in 1908 by German inventor H. Anschütz-Kaempfe, and it was invented for use in a diver.
Later, in 1909, the first autopilot was created by an American inventor Elmer A. Sperry. It consists of gyroscopes used to measure the rotation speed of the aircraft. Gyroscopes can collect this information to help stabilize the flight of the aircraft. In 1916, gyros were used for steering assistance on a Danish cruise ship of a German company, and since then it has become increasingly popular in attitude control and navigation systems.