Among babies and children with SNHL, 23-50% are caused by a genetic mutation that negatively affects the development of the Corti organ. (connexin 26, mutation, Waardenburg syndrome, Usher syndrome, Mitochondrial Disorders, etc.) The other cause is commonly acquired prematurely, characterized by infection (utero or postpartum) excessive noise or exposure to ototoxic drugs.
In preclinical and clinical studies, intravascular delivery of mesenchymal progenitor cells following acute neuro-pathological injuries (stroke, traumatic brain injury, spinal cord injury, etc.) is highly promising. In addition, limited animal and human data indicate that repair of the mammalian cochlea is possible following progenitor cell therapy. If these early results could be translated into a reparative treatment for SNHL, it could be a transformative advance in auditory (re) habilitation.

DaCosta et al. reported the effect of cord blood transplantation on SNHL following myeloablation in patients with mucopolysaccharidosis. Mucopolysaccharidoses (MPS) are a group of lysosomal storage diseases in which there is a deficiency in one of the enzymes responsible for the breakdown of glycosaminoglycosides (GAGs). Progressive accumulation of GAG in cells causes tissue and organ injuries. Most patients with MPS present with mixed hearing loss. As MPS progresses, GAGs accumulate in the tissues of the nasopharynx, ultimately interfering with Eustachian tube function and causing chronic otitis media. MPS types 1 and 2 often develop SNHL, and the exact etiology of SNHL associated with MPS is unclear. However, there may be a genetic congenital SNHL against acquired damage secondary to GAG accumulation in the cochlea or cochlear nerve. 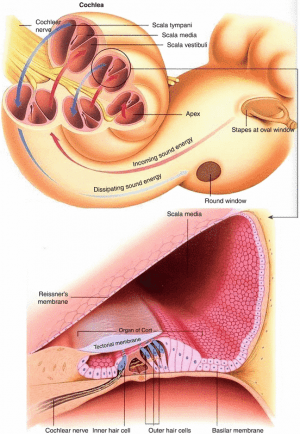 In the phase 1 trial, 11 children younger than 6 years of age with severe to profound non-genetic SNHL were treated intravenously with their umbilical cord blood mononuclear fraction. Subjects were taken from a single private cord blood bank, cord blood records, via the bank’s patient email portal. Patients were evaluated before and 1, 6 and 12 months after treatment. Assessments included physical and neurological examinations, speech-language pathology tests, audiology evaluations, diffusion tensor imaging (DTI), 3 Tesla MRI and laboratory tests.
No significant adverse effects occurred during the study. Ten subjects experienced an expected improvement in their speech-language pathology test scores throughout the trial. The only subject who did not develop, the study did not comply with mandatory amplification and recommended auditory verbal speech language therapy, demonstrating the importance of speech-language therapy in this vulnerable population. Approximately 5 of the 11 treated subjects experienced an improvement in ABR thresholds that reached statistical significance in the treatment population at the three frequencies measured. The improvement in the ABR threshold ranges from 15 to 20 dB.
There was a trend towards improvement in the delay of signal transmission along the cranial nerve VIII (Vestibulo-cochlear nerve). Improvements in both ABR thresholds and CN VIII latency were evident at the 1-month follow-up test and were persistent over the 12-month study period. The rapid and permanent change in delay is unexpected.
Representative audiograms (top) and ABR recordings at 4000 Hz (below) of a responding subject before (left) and after (right) hUCB treatment for SNHL. Advances in the behavioral testing (audiogram) match the changes found in the ABR recordings (physiological). Using 3 T MRI data collected before and 12 months after cord blood treatment, ABR thresholds were compared to subjects whose ABR thresholds did not change following treatment.
DTI measures fractional anisotropy (FA), a marker of white matter tract integrity and myelination. It tends to improve along auditory pathways in responding subjects. Changes in FA are most pronounced in the white matter in the Heschl gyrus, the primary auditory cortex.
Graphical representation of the mean fractional anisotropy between responding (blue) and non-responsive (orange) subjects in areas of interest in Heschl’s gyrus after cord blood mononuclear treatment for SHNL in children was created. The data show an increase in fractional anisotropy in responding subjects but not in non-responders. An increase in fractional anisotropy indicates improved white matter tract integrity and possibly repair of the primary auditory cortex. This trial supports the notion that autologous intravenous cord blood therapy can facilitate the repair of the cochlea. The data also show that improvement in the entire auditory pathway may occur following progenitor cell therapy. 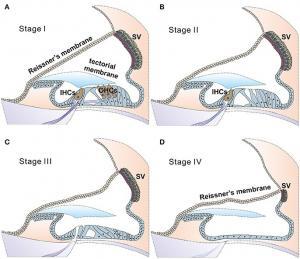 Although limited, the available data show that progenitor cell therapy does not lead to direct replacement of cochlear hair cells, but allows an internal repair machine to work. The immunomodulatory effect of systemically acting MSCs and the local effect of MSCs reaching and interacting with the cochlear stroma and possibly cochlear stem cells may facilitate hair cell transformation. A similar process involving MSCs that cross the barriers of the blood brain and blood maze and directly interact with the brain tissue can facilitate the repair and rearrangement of the white matter pathways of the auditory tract.
While some infused mesenchymal progenitor cells cross the blood-brain barrier and reach the cochlea, the majority cannot. Because mesenchymal stem cells have cell diameters greater than most terminal arterioles, most of the infused MSCs are found in the capillaries of the lungs within minutes after the infusion. Both humans and animals show this rapid pulmonary compression, clearance from the lungs, and accumulation in the liver and spleen between the next hours to days.
When MSCs are trapped, they cause a marked change in circulating cytokines and immune system phenotype. Specifically, human MSCs can migrate to an injury site and collect tissue-specific progenitor cells, and immunomodulatory cytokines and enzymes are coding and non-coding RNAs and growth factors. MSCs are also known to secrete molecules that modulate both innate and adaptive immune responses. These secreted molecules inhibit the maturation of monocytes into antigen-presenting dendritic cells.
It promotes a shift in the macrophage phenotype from M1 to M2, inhibits the proliferation and activation of B and T lymphocytes, and promotes clonal expansion of regulatory T lymphocytes. This extensive systemic change in the immune system can facilitate repair through a systemic paracrine effect. Similarly, the predefined fusion of MSCs with cochlear support cells may also allow cochlear support or cochlear stem cells to differentiate into hair cells. Epigenetic regulation of regeneration has recently emerged as a possible pathway to hair cell replacement.
The enhanced FA found in Heschl’s gyrus may represent the recovery of the auditory cortex from the sound-deprived visual fate back to original auditory function. This healing appears to be due to repair of the white matter pathways of the cochlea, spiral ganglion, eighth cranial nerve, and auditory pathways. All these repairs can be facilitated by intravenous mesenchymal stem cell therapy.

SNHL is a persistent sensory impairment and a major public health problem worldwide. Untreated vocal deprivation causes permanent rearrangement of auditory pathways that intervene first and then inhibit the development of spoken language. Current treatments increase the function of a damaged cochlea, and there is currently no reparative therapy available.
Both preclinical and clinical data indicate that treatment with progenitor cells can result in cochlear repair in mammals. Additionally, very limited data suggest that the repair process may extend beyond the cochlea to the auditory pathways and auditory cortex. This burgeoning area of ​​research could allow the development of a reparative therapy for non-genetic SNHL.