The breeding period, that is, the nesting and rearing period of the offspring, is an important period for owls as for other animals, because this is the period of gene transfer. It is the period in which genes from parents to offspring are passed on to future generations. For many owl species associated with prey availability, breeding takes place in the spring. The rearing of offspring is also timed to coincide with the availability of prey.

Owls (Strigiformes) are divided into two families, Tytonidae and Strigidae. Tytonidae are barn owls, while Strigidae are distributed almost worldwide. Owls appear heavier than they actually are as a result of their dense and soft fur. Both female and male owls are usually the same color. However, males are generally smaller than females of the same species. Owls are nocturnal birds of prey, and if the prey is not too large to swallow, they will feed on the prey they have caught or break them into smaller pieces before being swallowed. Non-digestible parts of the diet, such as hair, feathers, fur and bones, are removed from pellet form by extracting them again after a few hours of consumption. 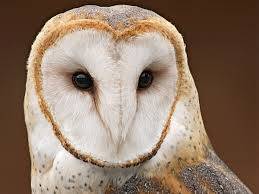 Some of the known and well-studied owl species are ghost owls or monkey-faced owls, Ural owls (Strix uralensis), barn owls (Tyto alba), sometimes referred to as spotted owls (Strix occidentalis), and tawny owls (Strix aluco). Barn owls can be easily identified by their underparts white or tan with black spots. Females tend to be darker than males that are whiter. However, females are more spotted than their mates. They also have relatively small eyes compared to men, while men appear smaller in body size than women. Owls are mostly mice, field mice, Microtus sp. It is known to feed on small mammals such as Sigmodon hispidus, Rattus rattus, Neofiber allene, Sylvilagus palustris and Oryzomys palustris. Sometimes they also feed on reptiles, amphibians, birds and large insects.
Owls, especially barn owls, find it suitable to live in open areas such as grasslands, agricultural fields and swamps. They can be found nesting in hollow trees or buildings where human activity is not dominant. Owls do not really nest, but live in abandoned nests of other birds. As night owls, they either rest mostly in daylight or roost in quiet and sheltered areas. They may be found to defend close nesting sites, but may not need to protect foraging areas from other owls.

Owls are known to be monogamous, and although there may be variation from one species to another, the same pairs can remain together for breeding purposes for several years. The female owls’ only responsibility during breeding is to lay eggs and hatch them from eggs. During breeding, it is the man’s responsibility to hunt and provide food for his wife. The nutrition of the partner begins before ovulation and continues until about 2 weeks after hatching. About 2 weeks after the eggs hatch, both parents provide the offspring until they become independent when they are around 10-12 weeks old.

Courting and Starting Mating Between Owls

Courtship involves searching for a partner. The male calls the female to pay attention, to attract the female to a suitable nest, but this may differ from species to breed. The call can be accompanied by the supply of food by showing game animals. Mating can follow after the female accepts the food. They call to initiate breeding among owls, and then continue to crow, although the male’s crowing practice is greatly reduced.
Mating owls sing constantly until a mate is found. The female’s singing The uniqueness of the male’s song lies in its higher pitch and clarity. Males of Tengmalm owls (Aegolius funereus) are known to sing only a few pieces when they bring food to their wives. Mating between owls can take place on rocks, branches or in a nest. Females can wander from burrows to burrows, but males are noted to be more loyal to the regions. Owls can live in different locations for breeding purposes, while Tengmalm owls, Northern Hawk owls (Surnia ulula) and Tawny owls can live in tree holes, larger open spaces of tree stumps, or natural holes, respectively. 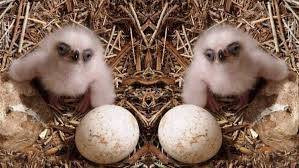 Owls’ eggs are white and oval. Laying of eggs can begin in February in a temperate environment, while in tropical or subtropical environments it can begin in June, summer, or autumn. Breeding among owls can begin in late winter in temperate regions and almost always begin in the tropics, especially towards the end of the dry season. Female barn owls usually lay 4 to 6 eggs, while some species can lay 1 to 2 eggs, although up to 10 eggs have been reported in a single nest.
Eggs are left 2 to 3 days apart, and incubation begins with the first egg, so eggs are usually hatched in the order of laying. That is, puppies in a single batch are not the same age, usually there is an age change of several days between puppies in a single nest. However, among species such as Pygmy owl (Glaucidium passerinum) incubation and hatching of eggs may not begin until the last egg is laid. The result of the age difference is nature’s unique way of controlling the availability of food. In the event of a shortage of food, older and stronger offspring are expected to survive, and so parents often have offspring to sustain their generation. However, when food is available, all chicks have a high propensity for survival.

Incubation and Growth Among Owls

Average brood size among barn owls was estimated to be 4.1, and grip length to be 6. Findings showed that 6 out of 10 pairs of owls were capable of producing two broods per year. The owl has an average clutch size of 2.85, and about 9.3 out of 10 clutches have 2-4 eggs. Hatching between owls takes about a month, and each chick can reach a new stage between 56 and 63 days. A beginner stage is one in which a puppy learns how to fly. In the new development stage, the offspring are provided by their parents for a few more days before finally becoming independent to feed themselves.
Usually owls lay 1 to 13 eggs depending on the species, but for most species this is 2-5 eggs. Incubation begins with the laying of the first egg, and the eggs are rarely left alone during incubation. The female develops a brood patch with a sparsely hairy part on her abdomen and a higher blood vessel density than other parts of the skin. The eggs take heat directly from the female owl through the brood. The female owl also develops an egg tooth in her beak that is necessary for the eggs to hatch. The hatching female breaks after hatching and the newborn age differs from one owl species to another. It can be about 4-5 weeks in screaming owls, 9-10 weeks in large horned species and 7-8 weeks in barn owls. An owl can become sexually mature at about 1 year old, but some species may not begin breeding until 2 or 3 years old. A pair can breed once or twice a year depending on some important factors affecting reproductive success.

When it comes to breeding and feeding, animals can be divided into two in terms of the relative seasonal acquisition and expenditure of nutrients: income growers and capital growers. Income breeders are animals fed during the breeding cycle to cover breeding expenses. On the other hand, capital breeders are animals that build up body reserves before the reproductive cycle begins. These animals cover their reproductive expenses from stored foods that are eaten before breeding begins. Owls are a source of income, they feed during breeding to cover their breeding costs.
No difference was observed in the barn owl’s body mass during the spawning period, which may mean that not all nutrients stored prior to spawn are used for egg formation. Basically, it can be said that all the essential nutrients female owls need for egg formation can be obtained through routine feeding during breeding. However, it is important that minerals accumulate temporarily in the bone before the beginning. 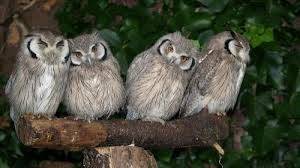 Female owls may not require long feeding preparation times before the breeding attempt is initiated. In fact, a second clutch can be laid about 2 weeks after the first clutch. It was found that a starving female owl returned to ovulation approximately 28 days after being subjected to prolonged total food deprivation, up to a relative body mass loss of up to 30%. This finding supports the claim that reproduction is not affected by stored energy or nutrients and is not initiated by reaching the optimum body state. It may also mean that the climatic and poor body condition of female owls do not have a long-term effect on reproduction.
Owls are generally monogamous and vary slightly between species. They are income breeders so they do not need special feeding plans before breeding or during rearing. The nutrient requirement for body condition and egg formation is usually met through routine nutrition. The availability of food, the risk of predation, the weather, and the presence of sexual partners play an important role in determining sexual reproduction among owls. There is a 2 or 3 day difference between laying one egg and laying another. The eggs hatch in the order of laying, after the incubation cycle is complete, which usually takes about 33 days.