Specific language impairment and developmental dyslexia are categorized as specific types of learning difficulties, but over many years most of the research on these disorders has been looking at perceptual disorders and issues with certain linguistic components such as phonology and grammar. There is an opinion that children with these disorders have impairments in basic language learning. In this view, the language and literacy difficulties experienced by these children are not by-products of some other primary deficiencies.
Instead, they imply the disruption or immaturity of learning mechanisms that allow for the removal of structure from a rich and varied language environment. There is a lot of information on recent developmental and neurobiological studies to evaluate the contribution of different brain systems to language learning, focusing particularly on how they may be affected in children with language and reading impairments.

Research on the brain structure and cerebral function of children with learning difficulties has benefited from new non-invasive structural and functional technologies. Most studies have focused on the study of dyslexia using neuroimaging studies (magnetic resonance imaging (MRI)) or functional studies (electroencephalography, event-related potentials, functional magnetic resonance imaging, positron emission tomography). Studies based on functional neuroimaging have identified a network of three regions that mediate word reading localized in the left hemisphere, and these are as follows:
A sublexical dorsal flow localized in the temporoparietal areas,
A lexical ventral flow localized in the occipitotemporal region,
A cerebral area in the left lower frontal lobe that is deficient or overactivated by the temporoparietal or occipitotemporal regions. 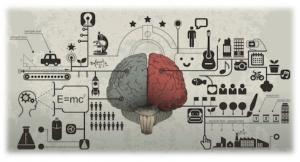 Universal in different languages ​​and spellings, this network consists of a dorsal and ventral component running in parallel that connects to the lower frontal gyrus. Dorsal current is associated with sublexical word meaning consistent with word reading. Ventral flow is specialized for visual processing of orthographic models. The fusiform gyrus is considered to be an area that mediates word recognition with direct access to semantic regions in the lower temporal regions. Studies based on functional MRI have shown that the development of the ventral system depends on exposure to stress, and in children this system is reconstructed with clear instructions in reading. Quantitative analyzes of MRI showed that the volume of the researchers’ network decreased before the official reading instructions began.
Dorsal and ventral pathways resulted in a similar activation pattern in children with vocabulary learning disabilities compared to children with reading comprehension learning difficulties (RCLD). Conversely, the group of children with RCLD showed reduced deactivation in the left angular, left inferior frontal, left hippocampal and parahippocampal gyrus. In other structural studies on adolescents with RCLD, researchers found that reduced gray matter in the right frontal regions explained executive dysfunctions. Functional MRI studies in adults have found that language learning also affects the corticostriatal and hippocampal systems. These structures are connected to each other, cortex and other subcortical structures.
Functional interactions between these regions have been identified during the learning processes. As a result, changes in functional neural activity in one of these regions during language learning may reflect a local change in a complex learning network. The frontal cortex and basal ganglia appear to be involved in learning the phonology and grammar of a language. The hippocampus is also essential in learning vocabulary; In fact, in fMRI studies, hippocampus results are activated in the process of learning new vocabulary and coding processes related to words.
The ventral striatum (nucleus accumbens) is activated in learning new words, while the dorsal striatum responds to feedback on verbal paired tasks. Abnormalities in the striatum have also been seen in children with language impairment. Some studies have suggested a decrease in the volume of the caudate nucleus in children with specific language and learning disabilities, while others report an increase in caudate nucleus volume. Functional studies in adults with dyslexia show hyperactivation of the striatum and is not seen in children with dyslexia. This suggests that there is a compensatory mechanism in adulthood. Structural network analysis in children at higher risk for dyslexia and other reading difficulties showed that the hippocampus, temporal lobe, and putama were less strongly linked in these individuals.
Studies on math-impaired children have found connectivity disturbances in temporoparietal and inferior parietal white matter. Researchers did not find consistent structural differences in all studies of patients with dyslexia. Because this disorder is probably the result of a combination of many risk factors, including motor, verbal language, phonological disorders, and executive defects. Functional neuroimaging studies on numerical processing and mental arithmetic have also demonstrated the existence of a neural network connecting the frontotemporal regions with three left parietal circuits, which are as follows:
• Superior parietal,
• İntraparietal

• Inferior parietal, this network is characterized by increased activity in children with math learning disabilities.
Other reports have shown that specific cerebellar regions contribute to cognitive functions, particularly verbal short-term memory deficits, reading development, or cognitive, emotional, and behavioral functions in general in children with learning disabilities. According to the cerebellar deficiency hypothesis, specific regions of the cerebellum are functionally linked to the cerebral reading network. The cerebral regions associated with reading that have a functional connection with the cerebellum are expected to be three and these are as follows:
• İnferior frontal junction (IFJ),
• İnferior parietal lobül (IPL),
• Orta temporal girus (MTG),
An analysis of connectivity showed that there are three different sets of connections between the cerebral and cerebellar regions. The first set of connections consists of a connection between IFJ and IPL that converges to a region in the right lateral posterior inferior cerebellum and is expected to have a phonological role. The second set of connections consists of a link between IFJ and MTG that converges to a region in the right posterior superior cerebellum and is expected to have a semantic role. The third set consists of a functional link between the MTG area and the lateral anterior region of the cerebellum. There is no common functional terminology for the third linkage group.

Studies on children with learning difficulties, especially children with dyslexia, have shown that they are involved in the function of cerebral areas and systems related to the cognitive process related to speech and learning. As has been proven, it supports the hypothesis of the existence of brain networks in the corticostriatal systems, particularly localized cerebral systems of the left hemisphere, which may explain structural or functional abnormalities and learning disorders in cerebro-cerebellar connections. These cerebral areas have a significant impact on different aspects of language such as the development of learning and the phonological and morpho-syntactic aspects.
However, there is a need to develop further longitudinal studies on children with learning disabilities to explore cerebral anatomical and functional changes during development and their relationship to specific learning disabilities model. Further progress in understanding the nature and specific components of learning difficulties in children will allow us to develop specific future targets and remedial intervention strategies.