Solar activity drives dynamic changes in the atmosphere and the ionosphere that can affect the performance and reliability of satellites in the space environment near Earth, and the ground-based technological systems and services based on them. And this situation is called space weather. The main medium through which the Sun’s activity is transmitted to the space environment close to the Earth is the high-mass plasma known as coronal mass sprays, a continuous stream of energetic charged particles or the solar wind that occurs in the form of large-scale momentary explosions. Sources of energetic particles and powerful magnetic energy include solar flares and galactic cosmic ray from space. Energetic particles and electromagnetic radiation from these processes can be divided into trapped radiation environment and transient radiation environments while creating the radiation environment close to Earth. 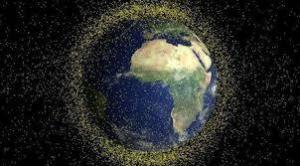 Charged particles, like the Van Allen belts, trapped or trapped by the Earth’s magnetic field into specific regions in space, form the trapped radiation environment. The temporal particle environment consists of energetic particles from solar events, galactic cosmic radiation that exists in interplanetary space zones and near Earth. Satellites and other space application systems are vulnerable to both trapped and transient energetic particles, as they are primarily designed to operate in the space plasma environment.
Energetic particles and electromagnetic radiation from solar flares and galactic cosmic rays can bombard and interact with the exposed surfaces of satellites. Sometimes it has enough energy to penetrate its open surfaces with possible access to its electrical, electronic and electrochemical components. Besides these effects, it causes anomalies due to atmospheric friction or for some reasons and these are as follows:
• Deterioration of critical properties of structural materials,
• May pose temporary and terminal health hazards for both spacecraft passengers and astronauts,
• Compromise the fitness of spacecraft for flight and even lead to complete malfunction
• Accelerated orbital disruption,
Occasional and unexplained errors in the functions of sensitive parts,
• Astronauts and sometimes to a catastrophic failure that could abruptly terminate the satellite mission.

Spacecraft Charging in the Space Environment

Electrons hitting the spacecraft surface in the space environment are faster than their ionic counterparts due to their very small mass (compared to that of ions). As a result, the flow of electrons in the medium is generally greater than the ambient ion flow, leading to a high level of negative charge of the spacecraft. The charge of the spacecraft can be mitigated by electron emission and ion retrieval methods. Electron emission is the method by which a device pulls electrons from the ground of a spacecraft and launch them into space. Ion uptake is the method by which positive ions reach a negatively charged spacecraft to neutralize negative charges. The first method is effective for reducing the negative charge of the spacecraft location, but not for dielectric surfaces. As a defect, the process can lead to different loading between dielectric and conductive ground. The second method is effective for reducing the negatively charged surface (whether dielectric or conductive) and differential charge. However, it has the disadvantage of electroplating the entire spacecraft with prolonged use. It has been recommended to use a combination of both types, as each method has an advantage or disadvantage over the other. Other abatement methods include plasma emission, partially conductive dye, polar molecule emission, mirror reflection and purple irradiation. For devices related to memories and data, some of the error reduction approaches or methods include Parity check, cyclic redundancy check coding, Hamming code, Reed-Solomon coding, convolutional coding, and overlapping protocol. Parity is a single bit appended to the end of a data structure, thus indicating whether there is an odd or even number of ones in the structure. The parity method counts a logical state or number of ones occurring on a data path. The cyclic redundancy check coding method is based on performing modulo-two arithmetic operations on a given data stream and interpreting the results as a polynomial. And in this way, it detects whether any error has occurred in a particular data structure. The Hamming code method detects the location of a single error and the presence of multiple errors in a data structure.
Reed-Solomon code can detect and correct multiple and consecutive errors in a data structure. Convolutional coding can also detect and correct multiple bit errors. However, the block can be distinguished from coding, instead of being grouped into separate words at the end of the data structure, it does so by interleaving the overhead or controlling the bits to the actual data stream. Errors in control-related devices can also be reduced by using some of the methods mentioned. A more effective mitigation approach for control-related devices with complex challenges is, for example, large-scale integration circuits or microprocessors, software-based mitigation involving tasks or sub-programs called health and safety. Health and safety tasks can perform memory clearing using parity or another method on external memory devices or registers included in the microprocessor. In software throttling methods, the internal microprocessor timers can also be used to run a watchdog timer or bypass health and safety.

The total ionizer dose in the satellite system can be reduced by methods such as shielding, depreciation and protective circuit design. Shield is the process of protecting spacecraft (and its passengers) from ionizing radiation using a configuration of suitable large materials. Reduction refers to the techniques generally used in electrical power and electronic devices where the devices are operated at maximum power distribution lower than their nominal values, taking into account the case or body temperature, ambient temperature and the type of cooling mechanism used. This method can increase the margin of safety between the part design limits and the applied stresses, and consequently the part. Design-level hardening of critical components in satellites is also a valid method, but this has been the practice of satellite manufacturers. These methods can also be used to reduce displacement damage, since the effect is also cumulative, the displacement damage is similar to the total ionizing dose.

Another important abatement approach involves the development of a suitable environmental model that can mimic the complex scenarios expected in extreme space environmental conditions. A well-accomplished or more complex model must take into account the individual effects of the various solar forcing mechanisms that cause fluctuations in neutral and ionized intensity. Another very important mitigation approach to consider is the development of a comprehensive warning system for solar energy events. Although solar activity can be predicted by days, it is difficult to determine the effect levels on the satellite and the Earth’s environment.
Therefore, effective monitoring of solar activity is required to predict atmospheric or ionospheric responses to solar events and their consequences on the orbiting satellite. After all, the orbit assessment and the satellite’s orbit are also important. Satellites in Middle-Earth orbit and in fixed orbit are subject to the effects of the outer Van Allen radiation belt. Satellites in low Earth orbit encounter the densest particle flows in the South Atlantic Anomaly, considered the main region where spacecraft receive the largest portion of radiation exposure during spaceflight missions.