Surgery may be offered to patients with stage I to III malignancy who are in good condition and are medically operable. A careful evaluation is strongly recommended before proceeding to surgery. In addition, the goals of surgery are staging, palliative, and more rarely curative intent.

It cannot be considered to have a real radical intention, because its purpose is actually to achieve a macroscopic resection that eliminates as many tumors as possible, since free resection margins are nearly impossible to achieve. The pleura may include block resection of the lung diaphragm and pleurectomy / decortication or extrapleural pneumonectomy, often including part of the pericardium. In some studies, second-stage surgery following induction chemotherapy, reported as three modality approaches, has been evaluated and different combined modality regimens have been investigated.

The European Organization for Research and Treatment of Cancer (EORTC) analyzed trimodality therapy in a phase II trial (EORTC 08031). Patients with MM underwent induction chemotherapy followed by surgery within 21-56 days. Of the 57 patients included, 42 could have had surgery, and the survival figures are positive with an overall survival of 18.4 months and a progression-free survival of 13.9 months, with operative mortality of 6.4%. Another phase II study of a similar design in the USA included 77 patients and achieved an overall survival of 16.8 months with an operative mortality of 7%.
Although trimodal therapy appears to be feasible in selected patients with promising results, it has been further evaluated in a phase III trial in the UK with negative results (MARS1 study). In this study, mortality was as high as 18.8%. After induction therapy, only 45% of patients underwent surgery, and the survival rate in patients who underwent surgery was lower compared to the control arm, where patients only received induction therapy.
However, a subsequent systematic review of 34 studies from 26 institutions found highly variable results with median survival ranging from 9.4 to 27.5 months and surgical morbidity ranging from 22 to 82%. The different surgical approaches could possibly be explained by the variability in the surgeon’s prior experience and the heterogeneity of the patients involved, but some patients may benefit from this treatment. A multidisciplinary team with sufficient experience should make recommendations on the suitability of patients for the three modality treatments.

Surgery for Staging and Palliation

Control pleural effusion, talc poudrage, or even decortication of a captured lung can be performed surgically. In a study, VATS (partial) pleurectomy and standard talc poudrage were compared in 196 patients. There was no survival benefit, but control of pleural effusion and quality of life improved significantly at 6 and 12 months for the experimental arm.
Cytoreductive Surgery (CRS)
Malignant peritoneal mesothelioma (MPM) is a rare disease with a 40-50% recurrence rate after surgical debulking. Determination of the histological type of peritoneal mesothelioma, the number of invaded lymph nodes and Ki-67 proliferation marker are very important parameters for surgical treatment. However, this is possible in most cases after laparotomy and cytoreductive surgery (CRS). Preoperative CT scan performed by an experienced radiologist can help us identify anatomical regions that are not suitable for surgical treatment, such as the intestinal serosa or porta hepatis.
In MPM, there is extensive intraoperative invasion of the surface of the small and large intestines, as well as the mesentery, mesocolon at the parietal and visceral peritoneum level. Lymph nodes are removed when invasion is suspected, but a complete CRS may require resection of the small and large intestines (especially the spleen angle of the colon or sigmoid colon). Complete hemostasis is needed to reach HIPEC and otherwise intraperitoneal bleeding will occur during the procedure. Before HIPEC, a comprehensive intraoperative peritoneum is cleaned with distilled water, diluted hydrogen peroxide (0.25%) or povidone iodine, which aims to mechanically clean possible cancer cells.
Recently, the use of cytoreductive surgery (CRS) in the treatment of peritoneal mesothelioma with hyperthermic intraperitoneal chemotherapy (HIPEC) has been discussed. Median overall survival for peritoneal mesothelioma patients treated with CRS and HIPEC ranges from 29 to 95 months. In a study conducted on 405 patients with peritoneal mesothelioma from 29 centers in Europe and the USA, it was reported that after peritoneal mesothelioma treatment with CRS and HIPEC, a median survival rate of 53 months and an overall survival rate of 5 years was 47%. The overall survival of patients with peritoneal mesothelioma treated with chemotherapy alone (pemetrexed + cisplatin) is low. 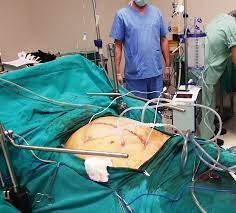 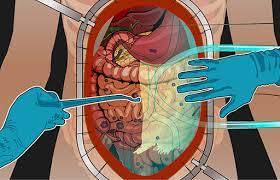 Molecular Therapy and Immunotherapy
One hope for molecular therapy in patients with MPM is the identification of ALK rearrangements that will be present in 3% of patients with MPM. This has been shown to be present in patients younger than 40 years who have not been exposed to asbestos fibers, and it is hoped that these patients will benefit from ALK inhibitors. Gefitinib and erlotinib, tyrosine kinase inhibitors that act on the epidermal growth factor receptor (EGFR), have been shown to have no significant effect on MPM.
In contrast, VEGF receptors, platelet-derived growth factors, fibroblastic growth factors, angiokinase inhibitors (nintedanib), which act on Src and Abl kinase signaling, improved progression-free survival in patients with MPM when co-administered with pemetrexed and cisplatin. Bevacizumab, an anti-VEGF antibody in combination with cisplatin and pemetrexed, significantly improved overall survival in patients with MPM. Immune checkpoint inhibitors such as anti-CTLA 4 and anti-PD1 antibodies continue to be investigated.