Fetal growth defect is classified as intrauterine growth retardation (IUGR) and small for gestational age (SGA) fetus according to estimated fetal weight percentage and doppler hemodynamic parameters. The pathophysiology and etiology of IUGR is complex and diverse. It highlights placental insufficiency as a paradigm and this explains its relationship with other clinically important formations such as preeclampsia. In relation to this context, mild, long and short term perinatal and postnatal outcomes can be seen. Therefore, although it is difficult, it requires early diagnosis and the development of a therapeutic strategy.
Generally speaking, fetal growth defect is considered to be the impossibility of reaching the potential genetically determined size. In the vast majority of cases, it is associated with uteroplacental insufficiency in the context of intrauterine growth retardation (IUGR). Although the exact cause is unknown, it is believed that environmental and genetic factors result from a fetal, placental, or maternal-originated interaction. Various complications of IUGR are associated and some of these complications are as follows:
• Stillbirth,
• Premature,
• Neonatal disease-mortality
• Endocrine,
Metabolic changes,
Increased cardiovascular risk,
Long term neurological sequelae, 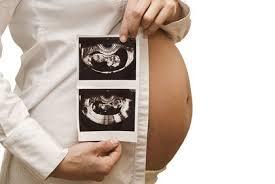 Identification of intrauterine growth retardation (IUGR) fetus is one of the main goals of prenatal care, as accurate perinatal diagnosis and treatment reduce perinatal morbidity. Most small fetuses cannot be diagnosed during pregnancy, even in high-risk subpopulations. This is partly due to the large number of reference tables used and the lack of comparable international standards for child growth. Therefore, the prenatal diagnosis of these cases needs to be improved. For this purpose, it is necessary to have an agreed definition that will allow comparison of data between obstetricians and neonatologists, prospective studies and analysis of results between different institutions.

In general, it shows intrauterine growth retardation (IUGR) with doppler hemodynamic changes, adaptation to a fetal hypoxia state, and chronic malnutrition due to placental insufficiency. This change of placental function is caused by insufficient invasion of trophoblast in maternal spiral arteries, an incomplete remodeling of these vessels and thus a deficiency in physiological vasodilation that occurs during normal pregnancy. This can be monitored by evaluating the increased uterine artery resistance in cases of growth restriction associated with placental origin.
In the future, biomarkers of placental insufficiency in maternal blood may be included as a diagnostic criterion for growth retardation IUGR as markers of placental involvement in this pathology. Recent evidence suggests that angiogenic factors predict poor perinatal outcome in small fetuses, with predictive values ​​similar to CPR and UtA doppler but with no proven additive value. An increase in anti-angiogenic factors sFlt1 and soluble endoglin (sEnd) and a decrease in pro-angiogenic factors (placental growth factor-PGF) were observed.

There are some infectious diseases that cause intrauterine growth retardation and these are as follows:
Sitomegalovirüs
It is usually the first cause of congenital infection (0.3-0.6%) and most cases are asymptomatic. If the infection occurs in the first and second trimesters, the risk of congenital disease is higher. On the contrary, the risk of transmission increases during the third trimester, but fetuses infected at this time are usually born healthy.
Congenital chickenpox
While the mother is more common when the disease is acquired between 8 and 20 weeks of gestation, fetal involvement is very rare in the second and third trimesters. There is also an involvement in the jas-skeletal system and autonomic nervous system.
Congenital rubella
There is a higher incidence of the disease in developing countries. Fetal involvement is observed in most of the cases in which maternal infection occurs in the first trimester and it develops less frequently after 17 weeks.
HIV
A relationship has been observed between HIV seropositivity and increased risk of spontaneous abortion, stillbirth, IUGR, low birth weight, preterm birth and neurodevelopmental changes. The relationship between premature birth and low birth weight is also associated with the use of highly active antiretroviral therapy (HAART). Increased risk of placental insufficiency has been identified in these patients.
Malaria
Malaria infection causes a large sequestration of erythrocytes in the syncytiotrophoblast. Multiple mechanisms cause fetal growth restriction, including abnormal vascularization, impaired growth hormone expression, difficulty in transporting nutrients, a process of inflammation and activation of the immune response.

Only 2% of fetal growth restricted cases without structural abnormalities are associated with changes in karyotype. If there are biometric malformations, microcephaly or progressive flattening, the risk of cognitive reflected genetic syndrome increases. 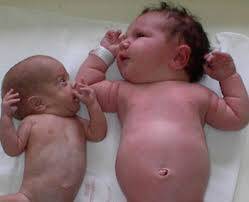 In general, smoking or exposure to smoke is seen as one of the main causes of fetal growth restriction. The probability ratio of developing IUGR in pregnant patients who smoke is 1.9 and its risk is directly proportional to consumption.

Fetal health assessment, from any chronic affections of the fetus (due to hypoxemia and a progressive increase in hypoxia) or from an acute involvement (severe hypoxia and metabolic acidosis), the change usually occurs within a few days before fetal death. However, some parameters are used to evaluate fetal health status, and they are as follows:
UA doppler
It is the only measure that provides both diagnostic and prognostic information for the management of intrauterine growth retardation. The progression of the doppler patterns of UA to absent or reverse diastolic flow is associated with the risk of fetal injury or death.
Orta cerebral species (MCA) MCA doppler
A subjected hypoxia biomarker reports the presence of cerebral vasodilation, and its change is considered a late manifestation. Fetuses with modified MCA-PI have a six times greater risk of emergency cesarean section due to suspected fetal well-being than fetuses with normal PI.
CPR
It has mainly diagnostic value. Because the increase in placental impedance (UA-PI) is often combined with a decrease in brain resistance (MCA-PI), it significantly improves the sensitivity of UA and isolated MCA.
Duktus venosus (DV) doppler
It is the parameter that has the greatest capacity alone to predict the risk of short-term stillbirth in early-onset IUGR. Absent during atrial contraction and reverse flow is associated with perinatal mortality regardless of gestational age. There is a risk ranging from 40% to 100% in cases of early onset IUGR.
Aortic isthmus (AoI) doppler
It is associated with an increase in fetal mortality and neurological morbidity in early-onset IUGR cases. This vein reflects the balance between cerebral impedance and the systemic vascular system. Longitudinal studies show that changes in AoI precede DV at 1 week and are therefore not a good predictor of short-term stillbirth risk. In contrast, AoI appears to improve the neurological morbidity prediction.
Uterine species Doppler (UtA)
The uterine artery flow study mainly focused on estimating the risk of preeclampsia and fetal growth restriction. However, this flow has also been accepted as a tool to assess both diagnostic and fetal well-being in small for gestational age (SGA) fetuses. There is a statistically significant correlation between doppler change in UA, doppler change in UtA, and reverse perinatal outcome. Both veins can be compared for their prediction capabilities.
Computed cardiotocography (CTG) 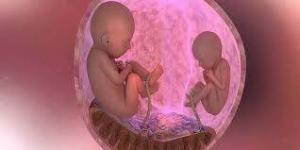 Provides new information about the pathophysiology and management of IUGR. It evaluates the short-term variability (STV) of fetal heart rate, which is a parameter that cannot be evaluated subjectively. Current evidence suggests that computed CTG is sensitive for detecting advanced fetal impairment and provides a value similar to that of DV with reverse atrial flow for predicting short-term fetal death. A low fetal heart rate variability is associated with the presence of acidosis and severe hypoxia, a fact demonstrated by cord blood taken during cesarean section. Despite the high application of conventional CTG in all clinical control protocols, it has not been shown to reduce mortality in high-risk pregnancies due to high interobserver and intra-observer variability in interpretation.
Biophysical profile (BPP)
Fetal tone is achieved by combining the ultrasound evaluation of respiratory movements and body movements with amniotic fluid and conventional CTG. A systematic review found that the use of BPP did not reduce perinatal mortality or APGAR by less than 7 in 5 minutes. Performing a BPP for the control of a preterm gestational small for age (SGA) fetus is currently not recommended.
Amniotic fluid index (AFI)
Mainly used as part of BPP. There is limited evidence of the role of oligoamnios as a predictor of perinatal complications in IUGR fetuses with Doppler follow-up, and its inclusion in management protocols is questionable.