Emerging infectious diseases (EIDs) remain a major threat to public health. Most EIDs identified in humans are shown to be of zoonotic origin. In recent decades, increasing evidence has been reported that viruses that cause EIDs in humans share the same identity or strong sequence homologies as viruses circulating in bats. This result has prompted epidemiologists to focus their attention on these wild mammals to determine whether bats play a specific role as reservoirs of virus diversity around the world and to understand the state of the threat in the context of ecosystem change.

Taxonomically, bats are grouped in the order Chiroptera (Gr. Cheir, el; pteron, wing) and are the only mammals adapted for fast flight over long distances. Bats are outnumbered by rodents in terms of species richness. But, with 1230 species (more than 20% of all mammals in the world) found in numerous ecological niches, they represent the second species richness in the mammal world. They are now known worldwide as important zoonotic virus reservoirs, and factors underlying high viral diversity continue to be the subject of speculation. Bats were sometimes regarded as enigmatic mammals with a particularly effective immune system or antiviral activity. Obviously, bats are not that different from other mammals, and a few bat viruses can cause illness and death of bats. For example, a study was conducted on 486 dead bats of 19 European Vespertilionidae species.
In this study, it was reported that two-thirds of death rates were caused by trauma or disease, and at least 12% of these mammals succumb to infectious diseases. And 19% died from bacterial, 5% from bat viral and 2% from parasitic infections. Still, a large number of viruses are apparently non-pathogenic in bats, possibly due to a long coevolution process. While most of these viruses apparently do not affect the health of bats, some have been shown to seriously affect wild or domestic mammals as well as humans.

Bats are considered the main host for alphacoronaviruses and beta coronaviruses, and they play an important role as the gene source in the evolution of these two coronavirus species. Most, if not all, alphacoronaviruses and betacoronaviruses found in mammals are evolutionarily linked to ancestral bat coronaviruses. Different Rhinolophus bat species in China carry genetically a variety of SARS-like coronaviruses, some of which are direct ancestors of SARS-CoV and thus have the potential to be directly transmitted to humans between species. A large-scale study of 282 bat species from 12 families worldwide revealed the presence of coronavirus in 8.6% of bats, while in non-bat species the rate was only 0.2%. A relationship between viral richness and the wealth of bat species has been shown, suggesting that the diversity of bat CoVs is primarily driven by host ecology.
A preferred relationship between the viral substrate and the bat family was also observed. Bat-borne Dependoparvoviruses are also suspected to originate from ancestors of adeno-associated virus (AAVs) in mammals. Similarly, bats are the primary reservoir for 15 of the 17 lyssavirus species. Lyssaviruses may have evolved in bats long before carnivorous rabies appeared. The spread of viruses among bat populations is a complex system affected by many aspects of seasonal bat life. Seasonality and environmental conditions determine the birth periods, migration, collective behavior, and lethargy of each bat species. Each can affect population density, rates of contact between individuals and, consequently, the basic reproduction number of the virus (R 0) and interspecies virus transmission. The basic breeding number (R 0) is an important parameter in the dynamics of diseases and is the average number of new infections that can result from a single infectious host introduced into a population of susceptible hosts.
Understanding how pathogens spread within their host populations is a key factor in epidemiology. It is particularly difficult to study vertical transmission of viruses in bats. Bats are very sensitive to ailments and environmental changes, especially during the breeding period. A disturbance in the birth colony can cause a significant mortality rate in newborn bats that can affect the demography of the population. The per capita transmission rate depends on the infectiousness of the virus, the susceptibility of the host, as well as the speed of contact between susceptible hosts and infectious individuals. Social organization in refuges therefore plays an important role in virus transmission. Some bat species form very large and tightly monospecific or multispecific colonies of thousands of individuals. For example, the density of a hibernating colony, Miniopterus schreibersii near Barcelona, ​​is estimated at 1,900 bats per square meter. Tadarida brasiliensis Mexicana occurs in Carlsbad Cave (New Mexico), a colony of 793,838 bats. This roosting behavior can provide great opportunities for viral change in bat colonies. 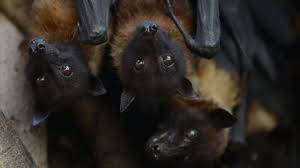 Bat colonies usually consist of more than one species, and large colonies and multi-species associations are common among cave dwellers, especially during maternity. This colonial behavior provides thermodynamic and social advantages to breeding females during pregnancy and lactation. For example, mixed colonies can be found in Southeast Europe. Miniopterus schreibersii, Myotis myotis and Myotis capaccinii are in direct physical contact. This coexistence can facilitate virus transmission between species. EBLV-1 seroprevalence in Myotis myotis and Miniopterus schreibersii followed the same temporal pattern for 4 years, which can be explained by virus transmission between the two species. Colony size and species richness are two important ecological factors that play an important role in seroprevalence variability. Virus transmission in colonies can take different paths depending on the bat and virus species evaluated. For example, it is transmitted through contact or bite with aerosols, feces, urine, blood or other body fluids.
There are hardly any data on vertical transmission from mother to fetus, and however, vertical transfer has still been reported. Transplacental transmission of Glasgow virus (HeV) has been demonstrated in the fruit bat Pteropus poliocephalus, but horizontal transmission is much more documented. Theoretical modeling of disease spread, large and well-mixed host populations are assumed. However, many wildlife systems have small groups with limited contact between them. The distribution of seropositive bats against European Bat Lyssavirus type 1 (EBLV-1) is not random in bat colonies and follows a collective pattern that shows the non-random spread of viruses within the colony. Most bat species have a metapopulation structure (composed of spatially distinct subpopulations that interact periodically) with variations in their subpopulations. The total number of individuals in various subpopulations should be sufficient to maintain virus circulation in the metapopulation over time. This is because immunity or death due to viral infection quenches transmission chains within individual subpopulations.
A longitudinal study of vampire bats in Peru found that the persistence of rabies virus cannot occur in a single colony. Keeping the rabies virus at levels consistent with field observations requires the dispersal of bats among colonies with a high rate of vaccination of non-lethal infections. The dynamics of virus infection in a bat colony usually produces periodic oscillations in the number of susceptible, immune, and infected bats. The delay between waves depends on the rate at which susceptible bats enter the colonies as a result of new births, the migration of pure animals from neighboring colonies, and the termination of immunity in previously infected animals. Once a sufficient portion of susceptible individuals in the bat population is reached, the virus spreads again if infected individuals join the colony. Numerous species not only increase the contact rate between bat groups and species, but can also facilitate virus entry. Or, it can spread through higher mobility of individuals among colonies, especially if these bats exhibit a migratory behavior. Although the role of migratory species in virus distribution is very important, unfortunately it has not been sufficiently studied.
Possibilities
Bat-borne virus transmission is a complex issue that also relates viruses with a high potential for infectiousness to humans and viruses without direct evidence of transmission from bats to humans. Consequently, outbreaks have already occurred demonstrating the reality of this threat. An occurrence is unpredictable, but some elements in the chain of events, particularly traceable, are as follows:
The prevalence of the virus in wild species living in the region,
The effects of environmental changes on the prevalence of pathogens in wild populations. 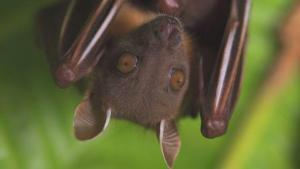 • Frequency of contact between humans and pets with bats (including indirect contact with faeces, aerosols, saliva or urine).
The future of the virus, bats and human relationship seems to evolve in a dual way. On the one hand, the number of endangered bat species is increasing and their natural habitats are decreasing. Worldwide, 23% of bat species are considered to be declining, according to the IUCN. On the other hand, the mosaic attracts different bat species, leading to increased deforestation and expansion of humanized habitats, synanthropic behavior and contacts. The current mobility of people is unprecedented and is a very important epidemiological factor to be considered as it increases the risk of disease spread. Some of these factors are as follows:
Land modification, changes in vegetation (deforested areas, new land products),
Disturbances in vector and host species dynamics,
• Microclimate changes likely contact between humans or livestock and wildlife,
Monitoring bat-borne diseases and, more importantly, the environmental conditions that bring bats, viruses and people into contact are critical and should lead to the development of risk management scenarios.