Humans are non-essential, random or abnormal hosts for the natural life cycle of Echinococcus. And it develops as a cyst (hydatid cyst) within the incidental host organs only after the eggs are swallowed. Larval infection leading to hydatid disease is characterized by long-term growth of metacestode in the intermediate host. The parasitic cystic structure is typically filled with a clear hydatid fluid. The germination inner membrane of the cyst provides germination and the outer cystic layer has a laminated part. A granulomatous inflammatory reaction leads to the formation of a fibrous tissue surrounding the cyst. Developing cysts are responsible for morbidity and mortality related to the disease. 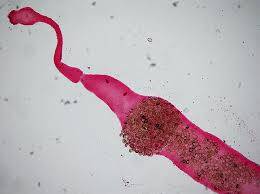 Although echinococcosis is seen as a preventable disease, it causes serious economic losses for the public health systems and agricultural sectors in endemic regions. Therefore, numerous control programs suggest that preventive measures to disrupt the parasitic life cycle can relatively reduce the prevalence and incidence of hydatid disease.

Hydatid cysts of Echinococcus granulosus are usually spherical or hemispherical if not compressed by adjacent organs. The size of the cysts varies depending on the time of their formation. However, echinococcus granulosus consists of 3 layers and they are as follows:
Outer (Pericist) layer
The outer layer is also called the adventitia or ectocyst surrounding the hydatid cyst. This layer is produced by host cells (modified dense fibrous protective tissue) in the host’s response to infection. There is a close interaction between the host tissue and the parasite, this layer plays an important role in the development and survival of the cyst. Any deterioration of the outer layer leads to degeneration or bursting of the hydatid cyst. The diameters of a pericyst layer vary depending on the host organ in which the hydatid is present, but generally the diameters are about a few millimeters.
Laminated (medial) layer
It is a white, solid, non-cellular thin layer consisting of microfiber fibers and dense granules rich in amino carbohydrates observed under the electron microscope. In addition to its role in reducing the effect of drugs used in the treatment of the disease, it plays a role in protecting the parasite from the immune response of the host and providing a suitable environment for its continuous growth.
Germinal (inner) layer
This is the inner layer of the hydatid cyst, a living cellular layer containing nuclei, and is associated with the lamellar layer by fingerprints formed by the germinal layer. It protects the components of the cyst and controls the osmotic pressure of the cyst wall. As the buds are formed from the germinal layer, they grow into the cavity of the cyst and the buds are vacuumed and stuck. Next, the process of forming buds from the inner layer of cells begins from these spaces leading to the formation of protoscolics. The watery cyst has fertility, the presence of protoscolics, their increased growth, and their relationship with the germinal layer. In addition, it is determined by other criteria for determining cyst fertility through the white color and thickness of the germinal layer.

Hatching capsules
These capsules are layered from the germinal layer towards the cavity of the cyst by several endogenous buds, which are small buds. These buds grow and each capsule is attached by the trunk to the germinal layer of the parent cyst. The budding process is repeated and each capsule contains a large number of protoscolics, approximately 30-10 heads per capsule. The capsules are gradually separated from the germinal layer and float in the cyst fluid. These capsules are similar in structure to the main cyst.
Capsules can be ruptured and protoscolics can be released along with free capsules, and this is called hydatid sand. Sometimes, when grown in an unsuitable environment, cysts do not contain brood capsules due to bacterial invasion or calcification. Capsules form but do not produce protoscolic and they are called sterile cysts, while capsules that produce protoscolic are called fertile cysts.
Hydatid sand
The term hydatid sand refers to the contents of the hydatid cyst, which includes juvenile cysts, incubation capsules, and protoscolics found in the hydatid fluid of echinococcus granulosus.
Hydatid cyst fluid
It is a clear colorless or yellowish liquid with an original weight of 1.005-1.009, a pH of 7.2-6.7 and inorganic substances such as iron, chlorine, magnesium, sodium, calcium, cadmium, nickel, chromium, copper and some enzymes. It contains glutamic pyruvic transaminase (GTP), glutamic oxaloacetic transaminase (GOT), lipase-containing enzymes such as acid phosphatase, oxidase, phosphatase, and dehydrate. They differ in quantity and quality depending on the source of the parasite, the location of the cyst, and the metabolism of parasites such as ammonia, bilirubin and creatinine.

Echinococcus granulosus parasite spreads almost all over the world, but there are a large number of parasite-hosting animals, such as cattle, sheep, and others. It is more common in large rural areas, rural areas, and those who live in these areas are definitive hosts, especially with dogs. Ekinokokkoz is a health and economic problem in many parts of the world. Some studies have recorded more than 50 cases per 100,000 people each year in highly endemic areas where the prevalence of the disease is about 5-10% in China, Argentina and East Africa. The disease also kills about 1 million people a year worldwide, but also causes a large amount of financial loss, including treatment and livestock expenses.
They also live in parts of Africa, Europe, Australia, Asia and Mediterranean countries. It is also highly endemic in Middle Eastern countries such as Iran, Saudi Arabia, Kuwait, Jordan, Palestine, Syria, Lebanon and Iraq. The epidemiology of the disease depends on the economic and agricultural factors, level of learning, health and social culture in the human society where the parasite spreads. And what helps the spread of the disease is that pets are encountered due to the lack of proper health conditions, especially dogs.

Iraq is a highly endemic country for the disease due to the spread of loose parasite infected dogs. Although there have been many new studies on the outbreak of this disease, it is still a major health problem. Despite the availability of modern conditions and equipment for diagnosis and treatment, it is still endemic in Iraq as there has been insufficient attempts to combat this parasite. Due to its global distribution and high regional prevalence, the epidemiology of hydatidosis and cystic type (CE) is still on the rise, and a decrease in alveolar type (AE), especially in morbidity and mortality, has been observed in the last two decades. It has been reported in Asia as a result of intensive epidemiology studies conducted in all countries of the world.
Hydatidosis (Echinococcosis)
Hydatidosis is one of the oldest known diseases of man. This disease was described by the Egyptians in a document dating back to 1534 BC, as the Babylonians mentioned in the Biblical Talmud. They described the cyst formed here as a bladder filled with fluid. This disease is caused by the formation of hydatid cysts of different sizes in different locations such as the liver and lungs in both animals and humans. And the severity of the disease depends on the number, size and location of the cysts. These cysts can cause the loss of human life in addition to economic losses in the livestock field. The incidence of this disease is high in humans because its risk is only incidentally detected during radiological examinations or various surgical operations, but can be discovered during routine detection in animal slaughter. The cause of hydatidosis disease depends on two important factors.
The first is that it is not possible to know the infection in the early stages, since the onset of the disease, because the cyst does not show symptoms until it increases in size, which puts pressure on neighboring tissues. The second factor is the loss of therapeutic tools and the disease is very similar to the severity of its metastasis at the metastasis stage. In addition, these cysts are found all over the body except hair and nails. Since this disease is one of the endemic diseases in Iraq, it has an impact on human health, economic and social aspects. For these reasons, although there are many patients, many studies and researches have been conducted to investigate treatment methods as surgical intervention. However, some conditions of the patients are treated surgically because they make normal treatment difficult.
Clinical symptoms of hydatidosis
Hydatid cyst disease (HCD) is slow at the beginning of the infection, and due to the slow growth and development of the cyst, they are not seen until they reach a diameter of about 10-1 mm per year. The emergence of clinical signs depends on the size of the cyst inside the affected organ, its stages, especially the activity of its components through the interaction between the hepatic vessels and neighboring organs between the bile ducts. Symptoms in humans depend on the affected organ, and the liver is the most exposed organ, at around 70-60%. It is followed by the lungs, spleen, heart, muscles, eye and thyroid gland at 22-20%, kidneys and brain at 6%. There are almost no hydatid cyst-free body organs except bones 1%, teeth, nails and hair.
However, it shows some symptoms in the liver, these symptoms become susceptible when the cyst is enlarged and palpated with liver abscesses. It also causes abdominal pain, vomiting and nausea, or the presence of secondary fibrosis in hepatic blood pressure and in the lower vena cava cavity. Hydatid cyst causes significant pressure on the diaphragm during adhesion to the liver, and the contents of the cyst in the chest break and come out. Clinical symptoms in the lung result in the presence of cyst pressure in the lung lobes, depending on the size of the cyst and whether it is healthy or ruptured. In addition, with chest pain and cough of varying severity, hemoptysis, shortness of breath, bleeding and in the lungs, these symptoms are not seen at first glance. When the cyst gets inside the pulmonary vesicles, it is a suitable environment for fungal and bacterial infections, after infection it leads to pneumonia and thus destroys the lung. The eruption of the hydatid cyst in the abdominal cavity causes a shock known as anaphylactic shock due to acute allergic reactions. This shock causes the severe spread of secondary cysts in the affected organ and neighboring organs, and sometimes bursting follows. Cysts in any part of the body leak the contents of the cyst into the bloodstream, causing headaches and other complications that can lead to sudden death.
Symptoms develop even when the cyst is small, and most cases of cerebral cyst disease are diagnosed in children. This infection is serious and sometimes leads to death. Cysts in the eye are rare and cause an external tumor of the eye, visual impairment, exophthalmos, and sometimes blindness around the eyelid. In bones, cystic hydatid disease often causes fracture due to the gradual erosion of the cortex, and presents symptoms in the form of pain in the upper and lower extremities. Bone pouches are abnormal in such a way that the laminar layer is not formed. In animals, infection is latent and can sometimes be stopped before symptoms start. The severity of symptoms varies depending on the severity of the disease and the location of the hydatid cyst. Clinical signs are generally seen as decreased milk production in the affected animal, poor wool, and organ damage in the affected area.