There are many ways to be exposed to microplastics and related contaminants, according to researchers. This includes filter feeding, suspension feeding, breathing at the air-water surface, and consumption of prey exposed to microplastics or direct ingestion. Therefore, microplastics can be assimilated into the food chain at different trophic levels.
Microplastics are easily swallowed by plankton, especially due to their small size, and feed by straining animals that cannot choose their food correctly. There have been studies in the literature showing the presence of microplastics in aquatic biota since 1960, and there are several studies investigating the uptake of microplastics by aquatic mammals and seabirds.
It has been proven by many studies that microplastics enter the body with food and people suffer from this potential harm. A study reported by Davidson et al investigated the presence of microplastics in Manila oysters in British Columbia. It was found that each oyster analyzed contained at least one piece of microplastic and the concentration in individual oysters ranged from 0.07 to 5.5 particles per gram. In Brazil, Miranda detected significant amounts of MMP in the stomachs of two important edible fish species. 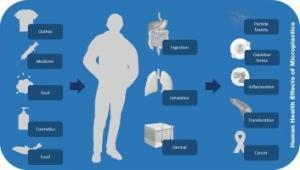 According to the review published by Santillo, MMPs have been detected in different marine types from various countries of the world such as Canada, Brazil, Portugal, China, Indonesia, the USA and Spain, and important regions such as the North Pacific central recess, the North. Microplastics can be dangerous to aquatic organisms in different ways. First, ingestion of microplastics can cause physical blockages, internal abrasions, and internal and external wounds, and therefore organisms can be harmed by spending energy to go out, suffer from hunger and weakness, and result in death.
Second, organisms may be exposed to leaching of toxic additives such as plasticizers, stabilizers, pigments, fillers, and flame retardants. These substances are not only toxic but can also be carcinogenic or endocrine active and affect the reproductive function of these species. Also, due to their large surface-to-volume ratio and some inherent properties, microplastics can absorb a variety of contaminants such as heavy metals, chlorinated and aromatic compounds, and potentially persistent organic pollutants due to their hydrophobic nature.
In more recent studies, the ecological effect of microplastics as carriers of toxic compounds has been investigated. It has been reported that one of the many ways microplastics can reach the environment is the low efficiency of water and wastewater treatment plants at retaining this material. Since there is a lot of substance in these plants and microbeads can absorb and concentrate toxic hydrophobic substances, they can work as distribution systems of these substances into the aquatic environment.
Many research efforts have been made to try to determine which are the main contributors of microplastic pollution. Scientists at the Ministry of Environment and Climate Change (MOECC) are examining the presence of microplastics in the Great Lakes. And in this context, in 2014, they collected surface water samples from downstream of Detroit-Windsor, near the mouth of the Grand River and near the shore of Lake Erie near Fort Erie. Based on the data collected, microbeads (primary microplastics) made up about 14% of the material collected. Also, higher concentrations of microplastics have been observed near highly urbanized areas such as Toronto Humber Bay.
A greater amount of secondary microplastics was found, these include fragments from broken mat, chips from plastic cuts, chips, foams and fibers from styrofoam packaging. An increase in the presence of microplastics has also been observed after rainstorms occur, due to the drift of particles off roads and from the landscape. They also examined the composition of the waste form of wastewater treatment and it was observed that the microbeads made up 30% of the microplastics found in wastewater samples. Microbeads were found in lower amounts (less than 2%) from urban streams in the Toronto area, but fibers accounted for the largest amount of microplastic particles in these samples. 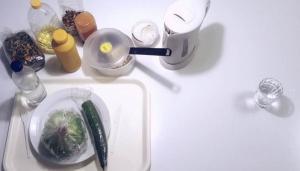 It is very difficult to determine the origin of microplastics due to its small size, part structure and unknown possible welding range. The potential source of polyurethane particles stems from furniture foam, adhesives such as construction adhesive products, surfacing and sealing applications. Some particles (black, opaque, rubber-like consistency) are probably caused by vehicle tires, both from the natural wear process during driving and from the breakdown of used tires for recycling purposes. The source of the fibrous material is probably due to the production, washing and natural aging of textiles (synthetic clothes and carpets).
The potential source of some particles (amber colored beads) includes exchange media for water treatment and softening as well as for a variety of medical and industrial applications. Another source of microplastics in aquatic environments is the drag of this material by storms and extreme weather events. According to the results from Ballent’s study in 2015, most of the spherical beads (microbeads) found in the sediments were from non-cosmetic sources; however, it is possible that some of the parts in the samples were caused by cosmetic products such as toothpaste and face washes.
However, it is still important to include microbeads manufactured for use in cosmetic products on the Toxic Substances List in Schedule 1 of the 1999 Environmental Protection Act. In 2013, it was found that Microbeads made up about 58% of microplastics (less than 1mm) collected from the surface of the Great Lake, and this material was comparable to particles used in cosmetic products. Microbeads were officially declared toxic by Canada in June 2016, as a result of numerous studies of the effect of microplastics in aquatic environments. According to the federal government, the sale of shower gels, toothpaste and facial scrubs containing microbeads was banned in July. The use of microbeads in natural health products and over-the-counter medicines was banned in 2018 and 2019.