Pregnancy is the happiest time for all women in their lifetime. A woman’s body goes through multiple changes during these 9 months of pregnancy. These changes do not only occur internally (inside the body), but are also reflected in the skin due to hormonal balance, changes in blood flow, and curves. Almost 90% of women experience skin changes during pregnancy. In addition, the changes in the skin experienced by each woman can be different. Because most pregnant women are not aware of these pregnancy changes, they are not ready to face these changes, so they are worried. This article contains information about the skin changes seen during pregnancy. 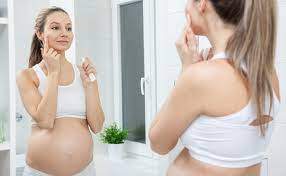 Although the skin changes and severity seen during pregnancy vary from woman to woman, the problems encountered in general are as follows;
Hyperpigmentation
Most women experience pigmentation throughout their lives. This pigmentation can be generalized or localized to a specific body area such as the neck, armpits, and specific areas. Dark spots and patches may appear during pregnancy due to hormonal fluctuation.
Melasma
Also known as pregnancy mask or chloasma, stubborn, dark brown patches on the cheeks, forehead, chin and upper lip are among the most common skin problems encountered during pregnancy. They are usually symmetrical on the face and often this pigmentation disappears after birth.
Acne
This is another common problem that can be encountered due to hormonal fluctuations. Especially in the first and third trimesters, androgen levels increase, and it can aggravate the acne problem in pregnancy. Acne caused by pregnancy and postpartum pregnancy usually resolves after hormones return to normal.
Hair and Hair Loss
During pregnancy, shedding can be seen in the hairy skin area. The most common reason for this is the hormonal changes experienced during this period and its severity can vary from woman to woman. And after this, it usually goes away on its own with the return of hormones in the first three months after birth.
Hair Growth
Excess hair growth is often linked to hormonal fluctuation, so women may experience excessive and abnormal growth during pregnancy on body parts such as arms, legs, back, belly.
Skin Patches
Skin patches can become heavy during pregnancy due to increased weight and hormonal changes. Leptin, secreted by the body’s adipose tissue and the fetus, is a hormone that promotes the growth of skin cells and exacerbates skin tag formation. It usually goes away on its own after the first 3 months with the return of postpartum hormones to its supplement.
Atopic Dermatitis
This skin condition is characterized by red, itchy bumps that can appear anywhere on the body. About 20-40% of women who experience eczema during pregnancy have a history of atopic dermatitis before becoming pregnant.
Sealer
Wart; It is a viral infection that causes skin growths on the skin. Women with the same history may experience this during pregnancy.
Spider Angioma

They are enlarged blood vessels that resemble the bodies of spiders. Due to increased estrogen levels during pregnancy, this becomes a common occurrence in the female body and may also disappear after childbirth.

Other Skin Changes During Pregnancy

Other changes in the skin related to hormonal changes during pregnancy can be listed as follows;
1) Besnier’in Prurigo’su veya Prurigo’su
This dermatosis occurs during the first trimester of pregnancy, when women experience redness, eczema, and allergies on the arms, legs, and abdomen. This is often seen in people with a history of atopic dermatitis.
2) Itchy Urticarial Papules and Plaques of Pregnancy (PUPPP)
This occurs during the third trimester of pregnancy. These appear as hives-like rashes, which are a sudden inflammatory reaction to sudden stretching of the skin. This is more common in the following areas: it looks like cracks in the navel.
3) Pemfigoid gestationis
This is common in pregnant women where they witness pustular rashes on the legs and arms. It can be itchy and painful.
4) Intrahepatic cholestasis in pregnancy
This condition presents as a sudden itching on the palms and soles that can spread to other parts of the body. In this case, 20% of women may have an irregular liver function test. Therefore, liver function tests are recommended during pregnancy.
Most skin problems during pregnancy are benign and do not affect the health of the mother or fetus. However, if the skin condition worsens and becomes uncomfortable, a dermatologist should be consulted as soon as possible.