In recent years, the field of growth disorders has evolved further, with more determining signs of its harmful potential on the health and development of fetuses, newborns, childhood and adults. Briefly, it covers effects on growth disorders, including growth hormone deficiency (GHD) and fetal growth restriction (intrauterine growth restriction (IUGR)). Knowing the later effects of these hormones on different biological systems provides valuable information for the management of these diseases.

The numerous effects of GH and insulin-growth factor-1 (IGF-1) play an important role in the health and development of infants and the individual. Impairment in this axis / GHD during development causes various complications such as weight impairment and developmental deterioration. A systemic GHD can cause early postnatal hypersensitivity (mechanical and thermal). Also, GHD can reduce minerals in bones and increase the risk of bone fractures in adults. The harmful actions of GHD are reinforced in the presence of hypopituitarism.

GHD and the Liver

The liver is an important organ in which GH’s actions take place. For example, the loss of critical GH signaling pathways in liver-specific knockout mice causes these animals to share a common hepatic steatosis phenotype, indicating that GH plays an important physiological role in hepatic triglyceride metabolism. Steatosis leads to hepatic degeneration that can be corrected by GH administration. A high prevalence of liver dysfunction has been reported in adult GHD patients, GH-replacement therapy significantly reduced serum liver enzyme concentrations and improved histological changes in fatty livers in these patients. Clinical reports in children have shown the same association between untreated GHD and liver steatosis that resolved after GH replacement therapy. These effects of GH on liver repair are interesting because the liver produces its own regeneration factor. In studies conducted in rats, hepatocyte growth factor (HGF) was first produced in the sera of 70% hepatectomized rats, which is defined as a mitogen of adult rat hepatocytes. Gene destruction techniques have revealed in animal studies using Anti-HGF antibody or c-Met that both endocrine and paracrine effects of HGF play a role in liver growth and recovery from hepatitis after 70% hepatectomy, respectively. Despite liver production and strong liver regenerative properties, hepatic HGF gene expression and DNA synthesis responses to partial hepatectomy were found to be accelerated by treatment with GH in rats with hypophysectomy. GH is not known to stimulate or facilitate the transcription of HGF, but GH was found to be expressed in the liver of hypophysectomized rats undergoing partial hepatectomy, this GH promoting hepatic regeneration either directly or through HGF induction.
In this study, analysis of the products obtained with the RsaI restriction enzyme showed that hepatic GH originated in two bands at the same expected molecular weight position as the bands obtained from pituitary rat GH. From these data, it is clear that there is a hepatic GH expression that contributes or determines the liver’s high regenerative ability, as well as playing important metabolic functions in this organ. The presence of hepatic GH expression in untreated GHD humans should be investigated, as recommended in the case of testicles in GHD patients. In any case, GH-replacement therapy performs an important restorative function in non-alcoholic liver steatosis and perhaps other liver diseases.
There is GH expression in a normal liver, but this organ has its own regeneration factor. Untreated GHD can be subject to non-alcoholic liver steatosis (right) and increases plasma levels of liver enzymes (transaminases). GH therapy saves the damaged liver and plasma liver enzymes return to normal levels. Untreated GHD patients cannot recover a healthy liver despite liver expression of GH and HGF, but GH therapy leads to regeneration of the damaged liver. And this regeneration may be due to GH administration, hepatic expression of HGF, or direct effect of GH on the liver.

GH is defined as a lipolytic hormone. Children and adults with untreated GHH usually show an increase in fat mass, preferably visceral fat. This has been attributed to the fact that GH inhibits lipid storage in adipose tissue by increasing the activity of hormone-sensitive lipase, an enzyme that plays a key role in lipolysis, and by reducing the inhibitory effect of insulin on the hormone. Sensitive lipase activity has also been suggested as mediators of increased adiposity in GHD states, despite positive changes in the secretion of certain adipokines such as adiponectin. Adipose tissue is an endocrine organ that produces various hormones and cytokines that exert autocrine, paracrine and endocrine effects. Two of these hormones, leptin and adiponectin, play very important roles in the organism. For example, leptin is the satiety hormone released from adipocytes in response to food intake and is associated with total fat mass.
The function of the hypothalamus, acting on its receptors in the curved nucleus, is related to reducing food intake and increasing energy expenditure. Conversely, adiponectin is negatively correlated with fat mass and functions as an insulin sensitizing hormone. Although the effects of GH on adipose tissue are expected to be different in terms of leptin and adiponectin secretion, in fact these effects have been found to be negatively related to the release of both hormones from adipocytes. For example, in Laron syndrome, there is a pronounced obesity and adiponectin hypersecretion that does not change during long-term IGF-I therapy. In any case, GH therapy usually reverses the increased fat ratio present in children and adults with pituitary GHH, thus confirming the relationship between GHE and increased fat mass.
In addition to the effects of GH on adipose tissue, ten publications explain that it also acts as a hunger signal that stimulates the brain about lack of energy and triggers adaptive responses to maintain minimal energy buildup. This mechanism occurs at the central level by activating the hypothalamic agouti-associated protein neurons (AgRP). GH has effects on fat mass and GHR in the adipocyte membrane. After interacting with endocrine GH, the activity of lipase (blue arrow) increases, causing increased lipolysis. Additionally, GH-GHR interactions lead to inhibition of insulin-induced lipase activity. 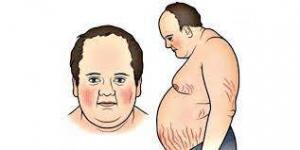 This insulin inhibitory lipase activity is enhanced by adiponectin, a hormone secreted by adipocytes and responsible for increasing fat mass. Untreated GHD patients have excessive adiponectin secretion. This is the reason why these patients show excessive fat mass. In addition, GH acts on hypothalamic neurons expressing AgRP and stimulates its production to alert the brain of energy deficiency. Among other factors, as GH secretion gradually decreases from puberty, the increase in body fat usually observed with age is likely to be associated with insufficient or insufficient secretion of GH.

GHD and Other Effects of GH

In addition to the well-known metabolic effects of GH and the effects of the hormone on almost all organs and tissues of the body, previously reviewed, untreated GHD patients exhibit some other changes. For example, blood pressure is higher in children and adults with GHD than in normal controls. This particularly affects systolic blood pressure, moreover, as GHD is associated with increased obesity, both factors contribute to an increased risk of future cardiovascular impairment. Quality of life and psychosocial behavior are affected in children and adults with GHD, often suffering from depression, fatigue, and less physical activity they are more prone to occurrence, and all of these improve after GH treatment.
GH is also a key modulator of neonatal hypersensitivity and pain-related behaviors during developmental inflammation. In rats where GHR was deleted, behavioral and afferent hypersensitivity to different stimuli was found, especially in early developmental stages. This has led researchers to hypothesize that GH therapy could be a therapeutic weapon for pediatric pain. Regarding the effects of GH at the brain level, it has recently been shown that GHD mainly affects the brain network, which includes somatosensory, somatic motor and cerebellum networks, which may contribute to the behavioral problems present in BDH children.