Over time, the genetic background of biofilm-forming microorganisms, as well as the conditions that support biofilm formation in food processing plants, have been extensively studied. Each step of biofilm development and distribution has a specific genetic signal control.
L. monocytogenes, microarray gene expression model, analyzed at different time intervals (4, 12 and 24 hours), was performed for the expression of genes depicted at different stages of the biofilm. The results show that more than 150 genes are upregulated after 4 hours of biofilm formation, and a total of 836 genes highlight a slow increase in expression over time. Although genome sequencing for many bacterial species allows the identification of genes involved in biofilm synthesis, for L. monocytogenes these genes could not be identified using bioinformatic analysis alone.
In biofilm formation, the attachment stage is a prerequisite where flagella and type I pili-mediated movements are critical for the initial interaction between cells and the surface. Researchers have applied one or two genome-wide approaches such as transposon splicing mutagenesis and transcriptome analyzes to find the roles of genes and regulatory pathways that control biofilm formation. With a transposon mutagenesis library, it was possible to identify the 70 L. monocytogen mutant with the Himar1 mariner transposon insertion that produces less biofilm.

It was found that 4 of the 38 identified genetic loci are involved in bacterial motility (fli D, fli Q, fla A and motite). This is a necessary feature for the first surface connection. Another gene with increased expression at 4 hours and decreased expression at 12 hours after initiation of the biofilm was prf A, the positive regulatory factor A of listeriolysin, and it is at the stage of colonization.
The list of genes that play an important role in biofilm formation in pathogenic microorganisms (UniprotKB database), extracellular and surface proteins such as internalin A and BapL, respectively, were found to play a role in the first bacterial adhesion in L. monocytogenes EGD-e. Moreover, its mobility is provided by flagella and depends on the temperature affecting the biofilm formation. Therefore, above 30 ° C the transcription of flaA is stopped.

S. aureus genes responsible for cell adhesion to the surface, glucosamine polymer and polysaccharide are included in the icaADBC operon, which functions in the biosynthesis of intercellular adhesins. Therefore, other genes encoding a number of transporter proteins (pro P, opu D, aap A and dlt A) were upregulated 8 hours after the start of the biofilm. Fimbria-like proteins encoding fim A, yad, K yad, N or M and yad C, such as genes involved in E. coli cell adhesion, are expressed together with the integral cell membrane. Genes with outer membrane proteins (htr E), transcriptional regulators (mng R and nha R) or other genes, however, this network appears to be strain specific.
In this case, S. enterica, differential expression analysis revealed that ycf R is highly conserved, as is the case with many Gram-negative bacteria, is upregulated under chlorine stress and is responsible for virulence and binding of the bacteria to glass or polystyrene. Also, Salmonella spp. Related biofilms are driven by a transcriptional regulatory CsgD protein that activates curli and cellulose expression. Transcription of the csg BAC operon encoding structural subunits for curli indirectly activates the transcription of the second mechanism, adr A, associated with cellulose production. Salmonella spp. are important factors in activation. Biofilms are c-di-GMP, acting as a secondary messenger molecule when the CsgD content is increased. Microcolonies are created by cell proliferation and many genes related to cell division, cell wall biogenesis, virulence and motility, stress response and transcriptional regulation factors are expressed.
It shows a selection of genes that are expressed at all stages of biofilm formation or are upregulated under the influence of different biotic or abiotic factors. dlt ABC L. monocytogenes. strains have been reported to be defective in biofilm formation, confirmed by transposon mutagenesis. It is the alanylation of teichoic acids for biofilm synthesis. That is, without mutants, -alanine on the surface of teicoic acids has a higher negative charge and develops a biofilm-negative phenotype.
Mature biofilm develops from micro colonies and this development is associated with EPS production. Biofilm matrix of B. cereus other Bacillus sp. It is similar to, but the eps genes responsible for EPS synthesis are not essential for B. cereus compared to B. subtilis. Little is known about the regulatory networks in B. cereus, but studies have shown that CodY and SpoOA can also play an important role in biofilm formation.
Moreover, the structural proteins encoded by tap A and bsl A from the B. subtilis genome are absent in the B. cereus matrix because these genes do not contain paralogs in the B. cereus genome. Instead, the tas A gene responsible for matrix fiber synthesis is required for B. cereus biofilm development. An important polysaccharide identified in the matrix biofilm of many pathogenic bacteria is cholanic acid, which plays an important physiological role for bacteria living in the biofilm. These EPS are synthesized by specific enzymes encoded by the wca L gene (S. enterica) or wca F (E. coli). It has also been shown that the RPO S gene, the main regulator of the overall stress response, can be seen as an important factor in mature biofilm development.
As a result, the transition from the planktonic state to the biofilm state is critical and undergoes a rigid gene regulation necessary for matrix synthesis, cell aggregation and cell signaling. However, bacteria with numerous genetic backgrounds communicate by regulating cooperative relationships through a mechanism called nucleus sensing (QS), where bacterial cells interact socially with each other through tiny spreadable signaling molecules called autoinductors and thus contribute to biofilm development. 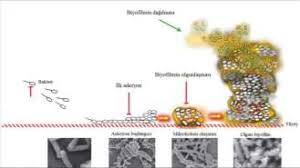 The nuclear sensing process, defined in the 1970s, takes part in the control of various gene expressions through chemical signaling molecules synthesized in response to cell population density. When bacteria begin to sense their critical biomass, they respond by activating or suppressing genes from 10% of the bacterial genome. The system has been described for both Gram negative and Gram positive bacteria.
Among the QS, two other important regulators are known to control biofilm shape and structure: cyclic diguanosine-monophosphate (c-di-GMP) and small RNAs. For example, S. aureus biofilm development is regulated by many environmental conditions and genetic signals. A key component in biofilm formation is mediated primarily by the polysaccharide intercellular adhesin, which consists of polymeric N-acetyl-glucosamine (PNAG) and eDNA encoded by the ica operon. In certain cases such as S. aureus, the biofilm-associated protein (Bap) plays a role in biofilm maturation rather than expression of polysaccharide intercellular adhesion (polysaccharide intercellular adhesins).
C-di-GMP uptake in S. aureus is an important biofilm regulator that allosterically activates the enzymes of exopolysaccharide biosynthesis, although the function of the small RNA genes of interest has not yet been studied in detail. While in the planktonic state it has been recognized to show an increased susceptibility to disinfectants, in the case of biofilm it may be among the most resistant, equally important to the food and medical industry.
Gram-positive bacteria such as S. aureus, B. subtilis and L. monocytogenes communicate through inducers encoded by the helper gene regulator (Agr) system. It appears that the Agr complex regulates more than 100 genes in the S. aureus genome, and deletion from the L. monocytogenes genome affects more than 600 genes. The helper gene regulator of S. aureus modulates the expression of virulence factors and toxins in response to auto-inducing peptides (AIPs), while luxS synthesizes AI-2, which inhibits exopolysaccharide synthesis by an unknown QS cascade.
L. monocytogenes, Triggers are the QS CTA bacterial aggregation and biofilm signaling transcriptional activation of one of the genes regulated by the virulence PrfA. Another gene involved in cell-to-cell interactions is the secA2 gene. It can inactivate the SecA2 pathway with its deletion, increased cell aggregation and sedimentation.