Although hydrogen is present in large quantities, it is rarely found naturally in the free state. It is mostly found in chemical compounds where it binds to other elements. The most common example we can take is water, where hydrogen bonds with an oxygen molecule. When hydrogen burns, it reacts with oxygen in the atmosphere to form water. This is also the primary reason why it is called “Hydrogen”, which derives from the Greek word “hydrogenes” meaning creator of water.
Position of Hydrogen on the Periodic Table
Hydrogen is similar to Alkali metals of group IA and halogens of group VII-A. Therefore, it is at the top of the periodic table.

Similarity of Hydrogen to Halogens
1. Both Hydrogen and Halogen are not metals. (iodine excluded due to its partial metallic character)
2. Hydrogen has a higher electronegativity (2.1).
3. Ionization potential is high.
4. A halide ion (X – ) that readily accepts an electron and forms a hydride ion (H –).
5. Both Hydrogen and halogen form compounds with metals and non-metals.
Explanation:
Halogen: HCl (H is not metal)
Hydrogen: H 2 S ( S is not metal)
Therefore, hydrogen is more like halogen than alkali metals. Therefore, the position of hydrogen is not confirmed in the periodic table.

Differences from Alkali Metals and Halogens 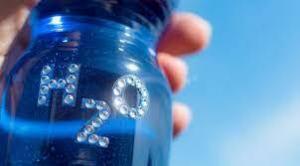 • Less electropositive than alkali metals and less electronegative than halogens.
• It contains only one proton (but no neutron) in its nucleus and only one electron in the extranuclear part.
• Forms a neutral oxide.
• The sizes of H and H ions are much smaller than those of alkali metals.
• Hydrogen ion (H + ) is unstable in water unlike Na + and K + ions .
Properties of Hydrogen
Physical Properties of Hydrogen
1. Colorless, odorless, neutral gas.
2. Less soluble in water.
3. Extremely flammable.
4. Burns with blue flame.
5. Very low boiling points.

Molecular hydrogen exists in two isomeric forms.
1. Ortho-Hydrogen: In this type, the two proton nuclear spins are aligned in parallel.
2. Para-Hydrogen: In this type, the two proton nuclear spins are aligned antiparallel.
Different Forms of Hydrogen
Atomic Hydrogen:
Molecular hydrogen is produced when it is passed through an electric arc (2273k) striking between tungsten electrodes. The reaction is endothermic and heat is stored in atoms.
H 2 2H- Heat
(Heat at 2273 K in an electric arc)
The liberated hydrogen atoms recombine to form H, with the evolution of a large amount of energy that can be used for welding purposes.
Hydrogen formed:
Hydrogen is hydrogen at the moment it is produced, that is, at the moment it is just released. The resulting hydrogen is much more reactive and is a much stronger reducing agent than ordinary hydrogen.
The reason for the activity of newly formed hydrogen is:
• Atomic state (atom is more reactive than molecules).
• Chemical energy released during the reaction.
• High internal pressure due to formed hydrogen atoms.