With the evolution in science and technology, the need for the latest equipment is getting stronger day by day. First, light microscopes were used to view micro-objects invisible to the naked human eye. Later, electron microscopes were introduced, giving much clearer and higher resolution 2D images, with the need for higher resolution imaging instruments.
Usually, there are stereological rules for generating 3D characteristics in micrographs of 2D sections. However, this production method could not produce 3D images for objects with complex structures. Many new techniques have been developed to view 3D models of even complex structures. At an early stage, synchrotron and X-ray based tomographic techniques were invented for 3D analysis of the sample. Both of these are transmission techniques, whereas the X-ray transmission technique uses the difference in absorption between different phases of the samples and recreates a 3-dimensional image of the object. Focused ion beam (FIB) is one of the 3D imaging techniques that goes head-to-head with a confocal laser scanning microscope (CLSM). The major difference between these two is that CLSM uses LASER for scanning purposes while the FIB is highly focused.
The leading industry for FIB was mainly the semiconductor manufacturing industry until the late 1980s. Later, however, applications of FIBs for the characterization of materials were introduced to materials and biological studies. In materials science studies, FIB helps to examine material interfaces and their defects leading to failure. It has also been used in biological sciences, mainly to study the interface between cells and tissues. Initially FIBs are single column and beam-based instruments using energetic ion beam, Gallium ion for cross section generation into materials, then secondary ion beam to generate images. The FIB uses a highly accelerated Ga 3+ ion beam generated by a liquid metal ion source (LIMS) with energy ranging from 30 to 50 keV with a beam diameter of about 5 nm. 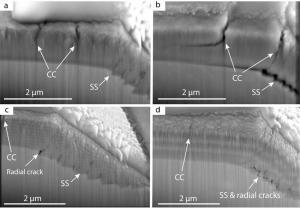 FIB is basically a lithographic technique, it offers very controlled and precise writing at micro and nano scales. However, when hyphenated by scanning electron microscopy (SEM), electron diffraction X-ray spectroscopy, and transmission, electron microscopy produces high resolution 3D images. When hyphenated with EDS, FIB provides very accurate elemental analysis as well as very high resolution images, but when hyphenated with SEM it produces very high resolution and clean 3D images.
FIB-SEM spelling has been developed to produce 3-dimensional images through contrast with SEM. SEM-FIB uses a double beam mechanism to select images of the relevant surface area of ​​the sample and cross sections of the selected area by milling. Surface images are captured by SEM and the scripting routine is followed for automated performance. The resolution of the 3D images produced depends entirely on the SEM resolution and the cutting precision of the focused ion beam. While high-resolution images with a resolution of tens of nanometers are produced with this technique, it is a good alternative for resolving back-scattered electrons. However, FIB-SEM associated with Energy Dispersive X-Ray Spectroscopy (EDS) gives very high resolution tomography with elemental analysis. The FIB-SEM spelled electron backscatter diffraction (EBSD) provides information on particle size, imperfections and gain boundary thickness, making it a very powerful tool.
Analysis of biological samples has always been a major problem due to its handling, stability and interaction of the electron beam with biological compounds present in the sample. Because biological samples are not conductive, it is really difficult to obtain high resolution and accurate images. Researchers in one of the methods used sample drying at room temperature or mild heating. However, in this method, changes in the sample structure and the change in the chemical composition of the sample remain uncertain. The biggest improvement that FIB-SEM brings is the presence of primary and secondary columns that emit a beam of ions and electrons at the same time. This causes overlapping grinding and combing. This feature greatly contributes to the use of this technique for biological sample study at different resolutions and magnifications. In addition, many researchers have been interested in looking at cells and tissues ranging from prokaryotic and eukaryotic single cells to tissues and their interactions. The first field emission-based FIB to date was developed in 1975 by Swanson and Orloff and Levi-Setti, and it is based on gas field ionization sources (GFISs). The primary objective of the FIB is to repair and organize circuits in the semiconductor industry. However, nowadays, various ionization sources are available commercially or as a prototype at the research stage. It is moving towards the field of FIB for circuit modification in the semiconductor industry, a characterization tool for materials and biological samples when coupled with SEM.
Currently available FIBs are equipped with liquid metal ion sources commonly referred to as LMIS-FIB tomography. These LIM sources have an edge over previous ion sources as they are more stable, have a long lifetime and the ability to produce low melting point rays. And it leads to high energy ion sources with much lower temperature energy. Gas field ionization sources (GFISs) using H + ions that can reach lines below 10 nm are also used.
The tomographic aspects of the FIB are enhanced when hyphenated with SEM. FEI was the first company to initiate the FIB / SEM double beam installation in 1993. According to the sample stage, the angle between ion and electron beams is in the range of 10–82 0 and the working principle of FIB and SEM is almost the same with the only difference between the beam source. In the SEM case, a very well focused electron beam is used, whereas in the FIB case, a highly accelerated ion beam is used to do the job. While the ion beam is used to slice the selected area, SEM scans the sliced ​​sample at the same time.
The electron beam in SEM is usually generated from a W-wire or an electron source with a lanthanum hexabromide tip. When the highly focused electron beam hits the sample, it ejects a low-energy electron from the atomic orbit called the secondary electron (SE1). And it leads to a vacuum filled with the higher energy electron of the same atom. This results in the release of an X-ray, the energy released in the form of an X-ray is the fingerprint energy of the element whose electron is deactivated. This x-ray helps examine the chemistry of the sample. An X-ray detector, usually EDS (energy dispersive X-ray spectrometer) is used for this purpose. Some primary electrons come into contact with the nuclei of the atom and these are then reflected back into the environment called backscattered electrons.
However, while some of these electrons are reflected back to the environment, they destroy an electron and give a secondary electron called secondary electron 2 (SE2). All these emitted electrons contain certain information about the sample depending on their source. For example, SE1 contains high resolution topographic information and originates closer to the point of impact of the electron beam. SE2 originates from the depth of the sample, is reflected at a higher angle than SE1, and contains low resolution topographic information about the sample. SE1, produced from the sample surface, is attracted by the electron detector with a positively charged window to collect electrons emitted from all directions. These collected electrons are then amplified and the results are recorded.

Electron beam scanning causes scanning image by scanning the sample surface. In SEM, electrons produced in a vacuum are attracted by a cathode from where they are focused through a capacitor lens. This beam from CL passes through a magnetic lens that accelerates the electron and then passes through a deflection coil. The task of this coil is to deflect the beam into the sample at any chosen angle. Then there is the last lens that focuses the beam on the sample surface. There is a backscattered electron detector that captures backscattered electrons in the vent. These electrons provide information about the chemical composition and crystal structure of the sample from where they are focused through a condensing lens.
In the case of FIB, the previously used source for ions is the thermionic electron ion gun (TEIG), which releases ions when heated at high temperature. Recently, FIBs are used field emission ion guns (FEIGs) where the electric field is applied to extract ions from the source. The electrons are then focused with the aid of a lens and pass through the scanning coil known as the deflection coil, which focuses them on the surface. This interaction of the ion beam causes the emission of ions (five or + charged species) and neutral atoms by sputtering very small portions of the sample. The ion detector captures the ions and creates an image of the sample.
Ionic beam destroys some secondary electrons, as well as ejecting ions and neutral atoms. The main reason for using the ion beam is the energy difference of the beam and the difference in impact diameter. For example, the He + ray is almost 7600 times more energetic than that of an electron beam. The wavelength is about 100 times the electron beam used in SEM, so this beam can easily reach a spot size of less than 10 nm.
Combining these two techniques gives very high resolution images. Comparing SEM to FIB, the number of SE2s degrades the resolution of the SEM image, while backscatter in the case of FIB is minimal. And it causes secondary electrons to be ejected from the monolayer of the sample. The result is a very high resolution image with versatile contrast between the deep and high points of the sample.