Ultrasonography (US) is accepted as the imaging technique of choice for diagnosis and follow-up. Because it is a useful and effective imaging tool that shows the cystic number, location and size. It can also guide radiation-free interventional radiology, which is generally available, safe, and low-cost. Therefore, it can be used for rapid diagnosis in endemic areas with large populations, and mainly investigates the abdominal area. Typically, liver involvement is shown as an echogenic, heterogeneous pattern mixed with irregular contours with multiple scattered calcific foci, while the radiologist should be aware of the differential diagnosis in less typical appearance. 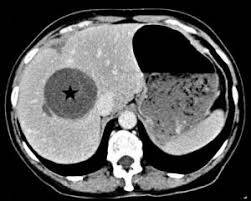 The criteria for ultrasonographic cystic classification of the liver were first made by Gharbi in 1981 and then developed by the World Health Organization (WHO) in 2001. Cysts in other areas, such as the brain and lung, have not been well demonstrated in the US and require the use of other screening techniques. Traditional radiography may be required as the first imaging modality to diagnose thoracic and bone involvement. X-ray findings are non-specific and many are visualized as small opacities.
Imaging Methods in Echinococcosis
Imaging tools for hydatid disease are computed tomography (CT), ultrasonography (USG), magnetic resonance imaging (MRI), radiography and urography. However, these imaging methods are as follows:

Radiography is the primary method for imaging in bone and lung disease. An uncomplicated hydatid cyst looks like a well-circumscribed homogeneous radio-opacity on a chest X-ray. Cysts quietly resemble carom balls in a posteroanterior X-ray and harder balls in a lateral X-ray. Cysts can appear as an oddly shaped mass due to the pressure of the mediastinum, bronchovascular components. Multiple large cysts are also pathognomonic for echinococcosis. Cysts may appear as double lobes due to notching inside the cysts. The loss of a round shape with a small flattened appearance indicates a bronchial rupture called a cleft sign. Atelectatic and reactive reactions can cause the loss of very limited margins, which can mimic carcinoma or pneumonia.
Due to the deterioration of the bronchus, a radiolucent frame called a crescent sign can be seen at the air inlet between the pericyst and endocyst. This symptom is not pathognomonic for hydatid cysts, it can also be seen in carcinoma, blood clots, myisetoma and Rasmussen aneurysm. If the air inflow increases, the endocyst shrinks and ruptures, a level of air fluid is observed in the endocyst, called a double curve sign. The natural membranes in the cyst fluid also create a lotus sign if the endocyst collapses. Female cysts can look like circular radio-opacities in the deep part of the cysts, called the so-called rising sun image. If the membranes are removed with cough, the pericyst may drain, air-filled cysts in x-ray are called dry cyst findings. Lung abscess can be imitated in cases of infection added to the disease. Abdominal X-ray can be revealed with hepatomegaly, right hemidiaphragm elevation and cyst wall calcification. During the healing period of the cyst, all the structures in the cyst become calcified and a dense calcified mass is seen on plain radiography.

Cysts do not always show classical symptoms, and diagnostic obstacles may overlap with the help of CT if necessary. CT helps to detect cyst wall or septal calcification, bone lesions, cystic component localized behind calcification. In addition, it is an important diagnostic tool in evaluating complications and in cases where USG is not sufficient. It is easily accessible, devoid of US radiation. Its sensitivity is about 100% and it has priority as a screening method for abdominal hydatidosis. USG and MRI are successful in showing hydatid sand, juvenile cysts, natant membranes and vesicles within the cyst.
Moving hydatid sand can be presented in the appearance of a blizzard, indicating split capsules and scolices moving in the cyst cavity. The most widely used classifications of sonographic appearance and the World Health Organization Informal Working Group classification echinococcosis (WHO-IWGE) were made by Gharbi et al. Gharbi type 1 is the most common subtype and is presented as a pure cystic lesion with or without hydatid sand. Gharbi type II cysts grow after trauma, cyst degeneration, host response, or drug therapy. With the division of the endocyst and pericyst, decrease in intracystic pressure results and natant membranes can be seen in the cyst cavity. The complete cleavage of the membranes is called the lotus sign due to its morphological appearance. Gharbi type III cysts are multivicular cysts that form the honeycomb image of the compartments representing the neighboring borders of the juvenile cysts. Circular appearance can be seen when female cysts are divided by hydatid matrix. Gharbi type IV cysts consist of an internal echogenic matrix that gives a solid appearance. For differential diagnosis, juvenile cysts or membranes should be sought to exclude a solid mass. Gharbi type V cysts contain wall calcification and intense distal acoustic shadowing. It can be assumed that a heavily calcified cyst is dead. However, a partially calcified cyst should still be considered a viable cyst. 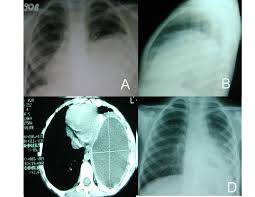 Imaging findings of hydatid cysts may appear to be a well-defined fluid accumulation, while they differ from cystic lesions to lesions that appear solid. There may be the appearance of natant membranes due to the separation of the endocyst from the pericyst. Ring-like calcification of the cyst can lead to complete calcification during differentiation of the cyst. Specific imaging findings are visualization of juvenile cysts, calcification of the cyst wall and membrane detachment and are difficult to diagnose at an early stage. The appearance of hydatid disease can be divided into four subtypes and these are as follows.
Type I: It is a simple cyst with no internal tectonics and appears to be as well defined on ultrasound as unilocular anechoic lesions. They appear as fluid-accumulated lesions on CT. MRI shows a fluid-accumulated cystic lesion with T1 isointense and T2 hypointense peripheral border (rim sign) surrounding homogeneous high signal cyst components.
Type II: Hydatid cysts contain naturally split membranes, or juvenile cysts, with juvenile cysts and matrix. The attenuation of the juvenile cyst is hypodense / hypointense for the maternal matrix on CT and MRI, respectively. If there are more than one cyst, they are covered with a single capsule that looks like a serrated wire. Type II HC is classified into three subtypes according to the age, amount and condition of juvenile cysts and these are as follows.
• Type IIa includes juvenile cysts organized in the periphery.
• Type IIb includes larger juvenile cysts with irregular borders covering almost the entire capacity of the main cyst.
• Type IIc contains highly attenuated round or oval masses with scattered calcifications and juvenile cysts, indicating the wear of the old cyst.
Type III: Cysts are dead calcified cysts.
Type IV: Hydatid cysts are complicated cysts. The most common complications of echinococcosis are rupture and superinfection. Degeneration of parasitic membranes causes rupture of the cyst.
However, various secondary complications likely occur depending on the location of the rupture in the body. Another global classification used for sonographic imaging of hydatid cysts has been presented by the World Health Organization Informal Working Group.

MRI shows the degree of cyst degeneration with separation of the wall, with collapsed membranes observed as bent linear joints within the cyst. Wall calcification is better demonstrated on MRI compared to CT, moreover, MRI is more successful than CT at representing boundary irregularities that indicate progressive segregation of membranes. MRI is also better at distinguishing liver hydatid cysts from other simple cysts. In cardiac cystic echinococcosis, transthoracic echocardiography, CT, and MRI can show the cystic nature of the lesion and its correlation with the heart chamber. ERCP and MRCP show cystobiliary relationship in bile ducts, dilated bile ducts, germinative membranes of juvenile vesicles and cysts. However, due to high intracystic pressure, the communication of the cyst with bile ducts cannot be effectively demonstrated with ERCP and MRCP.