The echinococcosis larval stage occurs in the intermediate host, meaning that the eggs swallowed grow in the small intestine. It invades the intestinal mucosa, causing the oncospheres entering the lungs, liver or other organs (metacestode larvae) to exit. In the next step, the definitive host digests the infected organs of the intermediate host. Protoscolices invade the intestinal mucosa, turning into adult worms. Humans can be infected mostly through indirect ingestion of contaminated water and food or through direct contact with dogs. The fluid-filled cyst is covered with three layers: pericyst, ectocyst and endocyst. The pericyst is formed by the protective reaction of the host tissue. The middle laminated layer called ectocyst allows nutrients to pass through. The germinal layer inside, called the endocyst, forms cyst fluid, blood capsules, scoolics, and also provides the formation of the ectocyst. 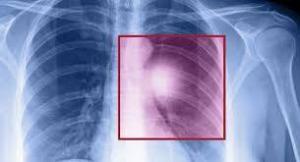 While the liver is the most commonly affected organ, the second is the lung and other organs in the body are less affected. Although the heart is rarely affected, it can be fatal when affected. The left ventricle is affected more often than the right ventricle, possibly due to its richer blood supply. In addition, the larger myocardial mass in the left ventricle provides better conditions for the parasite to grow, where hydatid cysts are usually found in the subepicardium. Tear into the pericardial space is rare. However, localization in the right ventricle is subendocardial, rupture is more common and results in anaphylaxis, pulmonary embolization, and death.
The most common way of myocardial invasion is coronary circulation. The second most common way is pulmonary venous drainage with rupture of pulmonary cysts, and the heart may also be related to direct contact. Hydatid disease has an evolutionary period; First the cysts grow slowly, then a differentiation period begins in which the parasite dies and forms a calcified, solidified cyst behind. The lungs are the most common organ in pediatric patients and the second most common organ for adults. Because of the negative pressure inside the lungs, cysts grow three times faster than the growth in the liver. It has been reported that the G1 genotype of Echinococcus granulosus infects humans more frequently than other subtypes. Genotyping human CE can help plan control methods for human hydatidosis. Genetic subtyping also clarifies variation in development, antigenicity, and response to chemotherapeutic agents.
The disease is initially asymptomatic and even if the cysts become very large, they may remain asymptomatic for many years. For symptomatic patients, symptoms are related to the localization of the cyst. While cough, shortness of breath or chest pain are observed in the lungs, symptoms of abdominal pain, hepatomegaly, tenderness, fever and jaundice appear in liver cysts. Patients with rupture of the cyst due to surgical intervention or mechanical trauma to the cyst are more likely to go into anaphylactic shock. In addition, cyst rupture can be noticed throughout the bronchus, patients experience hydatid cyst and membrane fragments, and symptoms of cough and sputum. If the cyst rupture occurs in the pleural space, patients will experience pneumothorax, effusion and emphysema, if the cyst ruptures through the vena cava, the patient will experience recurrent symptoms of pulmonary embolism.
Cysts, such as hypodense lesions, cause diagnostic controversy over computed tomography (CT) in some cases. Tumors with cystic degeneration, ominous lesions such as necrotic lung cancer, metastases and infections such as tuberculosis can mimic a hydatid cyst. Diagnosis for hydatid cyst (HC) is fairly straightforward if there are typical findings such as crescent mark, onion skin, combo mark, or folded membranes. However, atypical findings, such as the solid or more hypodense appearance of ruptured, collapsed, or infected cysts, are more complex as they resemble infections such as tuberculosis or neoplastic lesions. In these cases, MRI can help diagnose, ultrasound can help diagnose peripheral lesions and obtain pleura. 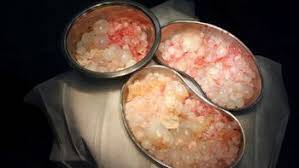 The course of the disease is typically slow, and most patients have an asymptomatic course of the disease for several years. Otherwise, the cystic slow growth rate is estimated to be 1-5mm per year, while patients develop symptoms as the cyst gradually grows. In the early stage of echinococcosis, clinical signs are mild. In later stages, with the emergence of symptoms related to cystic complications, damaged tissues and organs may become dysfunctional. Based on immunological tests and imaging, such as standard radiology, ultrasonography (US), computed axial tomography (CT), and magnetic resonance imaging (MRI), symptoms are non-specific and diagnosis is often incidental.

Serological diagnostic methods play an important complementary role. They are used to support radiological diagnosis and follow-up of patients after surgery or pharmacological treatment. There are many immunological responses to the disease. A mild immune response is noted in intact cysts, while complex cysts (oozing or ruptured cysts) tend to show a strong immune response. Serodiyagnosis consists of the detection of specific serum antibodies by multiple immunodiagnostic tests. The optimum test should be specific with high precision. There are important differences between the various serological tests regarding specificity as well as test sensitivity.
In routine laboratory practice, indirect hemagglutination (IHA) is often non-specific, the enzyme-linked immunosorbent assay (ELISA) using crude hydatid cyst fluid has a high sensitivity (up to 95%) with low specificity. The simultaneous use of both tests (IHA and ELISA) is associated with a diagnostic sensitivity of over 85-96%. False positive serological findings occur in 20% of patients with CE, and this is mainly related to cross-reactions with other parasitic diseases. In addition, the rate of seronegativity is relatively higher in patients with non-active disease stages, patients treated for autoimmune or malignant pathologies, and during pregnancy.
Cysts in bone, brain, and calcified cysts often do not show an immunological response or are low. Immunoblot analysis is generally used when IHA and ELISA findings are inconclusive. Immunological diagnosis is made by detecting specific serum antibodies. Immunological methods with Echinococcus granulosus, antigen B and antigen 5 (Ag5) often use the most specific antigens.

Hydatidosis is one of the oldest known diseases of man. This disease was described by the Egyptians in a document dating back to 1534 BC, as the Babylonians mentioned in the Biblical Talmud. They described the cyst formed here as a bladder filled with fluid. This disease is caused by the formation of hydatid cysts of different sizes in different locations such as the liver and lungs in both animals and humans. And the severity of the disease depends on the number, size and location of the cysts. These cysts can cause the loss of human life in addition to economic losses in the livestock field. The incidence of this disease is high in humans because its risk is only incidentally detected during radiological examinations or various surgical operations, but can be discovered during routine detection in animal slaughter. 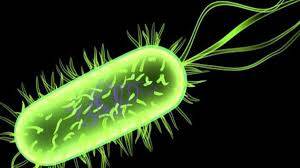 The cause of hydatidosis disease depends on two important factors. The first is that it is not possible to know the infection in the early stages since the onset of the disease, because the cyst does not show symptoms until it increases in size, which puts pressure on neighboring tissues. The second factor is the loss of therapeutic tools and the disease is very similar to the severity of its metastasis at the metastasis stage. In addition, these cysts are found all over the body except hair and nails. Since this disease is one of the endemic diseases in Iraq, it has an impact on human health, economic and social aspects. For these reasons, although there are many patients, many studies and researches have been conducted to investigate treatment methods as surgical intervention. However, some conditions of the patients are treated surgically because they make normal treatment difficult.