Daubenton’s bat lies in a geographic line from Western Europe, including the British Isles, across Central Europe, across Asia, and as far east as Japan. This species is insecticidal, it uses echolocation to detect and capture prey, with different behaviors such as hunting on water bodies such as lakes and rivers. Another distinguishing feature of Daubenton’s bats is that they appear to be the major bat species harboring the European bat Lyssavirus type-2 (EBLV-2). Lissa viruses, a group of viruses that include the rabies lyssavirus, are often associated with bats. Many of them are zoonotic, and EBLV-2 is responsible for two human deaths. EBLV-2 reports on Daubenton’s bats are from countries in Europe, although the majority is from the UK.
European Bat Lyssavirus Type-2 and Daubenton’s Relation to Bat
Phylogenetic analysis on early isolations of EBLV-2 confirmed that the virus is a lyssavirus associated with rabies lyssavirus. However, many questions remain unanswered about the transmission of the virus among bats and the pathogenesis in the host in the reservoir. Early reports have shown that infected bats exhibit symptoms suggestive of rabies, such as aggression, inability to fly and making noise. One of the first questions is the distribution of the virus in an infected bat. Rabies lyssavirus is neurotropic, meaning it targets neurons in the peripheral and central nervous system. Application of sensitive RT-PCR and virus isolation has been detected predominantly in the brain but also in other organs of a Daubenton bat infected with EBLV-2. However, quantitative RT-PCR has been shown that the virus is most abundant in a model similar to that observed for RABV in the bat brain and spinal cord. The virus detected in other tissues is most likely caused by innervated nerves. The presence of viruses in the salivary glands and tongue indicates that this is likely the origin of the virus and that biting is a means of transmission between bats. A similar conclusion was drawn for the transmission of RABV in North American bats. Experiments in a mouse model attempting to demonstrate aerosol delivery failed for EBLV-2. However, once in the brain, EBLV-2 exhibits properties similar to rabies lyssavirus, infecting neurons, stimulating innate immune responses, and triggering viral encephalitis symptoms. To validate some of these observations, a number of experimental studies have been conducted to investigate methods of EBLV transmission in bats and characterize EBLV-induced disease in natural hosts. These studies show that subcutaneous inoculation is the most effective way to infect insect-eating bats with EBLVs. The clinical manifestations displayed by infected bats range from sudden death without obvious disease to rapid progression to weight loss and stroke.
Field studies conducted in the United Kingdom in response to the EBLV-2 human case in 2002 provided evidence of virus circulation in the bat population of Scottish Daubenton. All oral swabs taken at the same time as blood samples are negative for EBLV-2. And, seroprevalence levels ranging from 0.05% to 3.8% have been detected in colonies across the country. Subsequent surveillance of Daubenton bat colonies in England found similar seroprevalence levels, suggesting that the virus affects bat populations across the country. This is supported by population genetic analysis of British Daubenton bats, detection of EBLV-2 infected bats from locations in England, Scotland and Wales.
One place where EBLV-2 infected bats have been repeatedly detected is Stokesay Castle in Shropshire. The tower of the castle is known to host a summer birth tunnel, and three EBLV-2 infected bats were found in the castle. Another infected bat was dispatched from a location near Newtown. Another practical question that holds in mind the zoonotic potential of EBLV-2 is whether current vaccines developed against rabies lyssavirus will protect against exposure after a bat bite. Cross neutralization and cross-protection studies in mice have shown that rabies vaccines will be protective. This leads to public health advice for individuals who are in close contact with bats, in addition to simple precautions such as wearing gloves when dealing with bats. Moreover, post-exposure vaccination may be recommended for those who have been bitten or had inadvertent contact with bats. This can also be extended to pets, especially cats that catch bats. 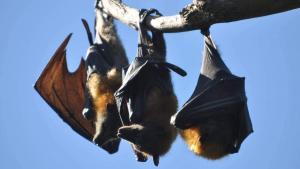 All evidence to date suggests that Daubenton’s bat is a wildlife reservoir for EBLV-2. However, many questions remain regarding the persistence of EBLV-2 in the Daubenton bat population in Europe and the virus is detected only occasionally. In the UK, this equates to a single isolation per year, but this insufficient number is probably the tip of the iceberg of continuous virus transmission events that occur when bats are active. Most applications in the UK occur in late summer and early autumn, with the exception of two bats sent in May. The incubation period for lyssaviruses in bats, ie the time without exposure to the development of disease or death, is highly variable. This cannot be detected in wildlife populations due to its nature as the timing of the transmission event is unknown. In one unique case, EBLV-2 was detected in a bat held in captivity for 9 months.
Captive studies in Daubenton bats have reported an incubation period of 33 days after subcutaneous infection. Subsequent study involving EBLV-1 infection of serotin bats gave incubation periods of 17 to 26 days following subcutaneous or intramuscular infection. This suggests that the incubation time varies from 2 weeks to 9 months, with factors such as virus dose and exposure pathway affecting the duration of disease development. The presence of the virus in the salivary glands and taste buds of infected bats indicates that biting is the main route of transmission. This could possibly occur at many points in Daubenton’s bat life cycle, including clustering and mating just before hibernation, to the formation of colonies in the summer.
The composition of the UK presentations of EBLV-2 bats provides little help in resolving this. Although based on low numbers, 15 cases, no gender bias (7 males and 8 females). The proportion of children sent appears to be relatively higher (8 versus 6 adults where data are available), perhaps supporting transmission in maternal colonies and shorter incubation periods of 2-3 months. This is supported by the repeated introduction of bats infected with EBLV-2 from the colony at Stokesay Castle. However, the ways the virus persists through hibernation are unknown and may rely on long incubation events in some of the cases. Modeling of rabies infection in North American bat populations indicates that this is critical for the long-term persistence of the rabies lyssavirus.

The geographic spread of EBLV-2 infected bats in the UK is a mystery about cases sent from different places with no apparent connection in time or space. A virus such as EBLV-2 that kills its host must struggle to stay in small bat populations. It is possible for a virus to survive in areas where Daubenton’s bats are abundant and individuals move between colonies. Alternatively, the virus can move across populations, as seen in the rabies lyssavirus seen in common vampire bat (Desmodus rotundus) populations in Latin America.
Similar difficulties have been encountered in continental Europe due to the unequal distribution of EBLV-1 in the serotene bat population and is the sporadic nature of BBLV in Natterers bats. A better understanding of Daubenton’s bat behavior, particularly how populations interact and move across the landscape, could help form hypotheses that could explain this distribution. Migration and spread, especially by males, can be a key feature of the virus persistence within bat populations. This is also considered critical for the spread of rabies in European red fox (Vulpes vulpesu) populations. Bats can use rivers and valleys to provide long-distance migration and corridors. This seems quite suitable for a bat species that uses bodies of water for feeding.