Brown algae fishing in Chile includes species belonging to the genera Lessonia, Durvillaea and Macrocystis that can be found along the coast between 18 ° and 55 ° S. The exploitation of these seaweeds is mainly done on the Northern coast because the environmental conditions of this region reduce the initial production costs. Brown algae are exploited from natural populations, the raw material widely used in various production processes and industries is exported to international markets as a source of alginate. International demand for Chilean kelps has reached 390,000 dry tons / year, with a steady increase in harvest over the last decade.

The geographical distribution and occurrence of commercial brown seaweed is associated with high energy environments in the Southeast Pacific. These environments are as follows:
• Lessonia species can be intertidal and lower tidal,
They form belts along rocky coasts in the open,
• Macrocystis forms shallow algae beds ranging from the intertidal region, 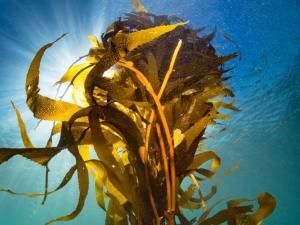 In the northern latitudes the 15 m depth is gradually replaced by Durvillaea, which dominates the tidal zones in the areas exposed to the wave towards the South. Southward and beyond 42 ° S, Macrocystisen is the abundant and dominant algae species. Lessonia species spread almost continuously along the entire continental coast of Chile. Instead, the distribution of Macrocystis is divided into populations that form patches in northern Chile. In contrast to the continuous coastal zone distribution from 42 ° S to Cape Horn (55 ° 58 ° S), the Macrocystis distribution is exposed to Chile’s South fjord region, surrounding Cape Horn and Argentina to the Chubut region (41 ° S) in the Atlantic. Includes ascending in a North direction by the remaining coast. Several items are combined to determine the observed algae distribution patterns. It arises from the multifactorial interaction of complex life history strategies of related species with environmental factors such as spatial and temporal changes in water movement, food availability, light and temperature. There are types of Chilean seaweed that are commercially exploited and they are as follows:
• Lessonia trabeculata ,
• Lessonia continues,
• Lessonia spicata
All of these are species with two morphotypes throughout their natural life cycle, representing very different ecological roles and needs, both environmentally and physiologically. Large and conspicuous (ie, harvestable) sporophytes alternate with benthic organisms that are microscopic low-celled and gametophytes.

Studies on the distribution and abundance of commercial brown seaweed in Chile are scarce and locally restricted until the end of 2000. Other than that, it cannot be compared in the few studies conducted that approach biomass stock information. And the use of methodologies, extrapolation of the total available biomass and annual comparisons is not allowed. A similar situation occurred regarding the distribution studies of the related species in both temporal and spatial gradients. Harmonization of methods or collection of information and their systematization are essential aspects of the population ecology of commercial species to propose adequate regulations and policies that guarantee the sustainable management of these resources. One of the few comprehensive and extensive evaluations of the biomass distribution of Lessonia trabeculata, Lessonia nigrescens and Macrocystis pyrifera was carried out in 2004–2005 for the geographic extension ranging from 26 ° to 32 ° S. Its main goal is to determine the distribution and abundance of the mentioned species in more than 700 km of coastline. During the study, 140 sampling stations separated by 4.5 linear km were established, excluding a priori sandy beaches and soft bottom tidal areas. Because they represent insufficient substrates for the settlement of algae spores. L. trabeculatatum was found in rocky lower tide habitats between 0 and 30 m depth in the study area. Up to 50,000 wet tons of local biomass have been recorded due to the expansion of the rocky platform into the subtidal region. The abundance estimate indicated that the study area had a stock of approximately 800,000 wet tons of L. trabeculata.
L. nigrescens is distributed in a continuous pattern throughout the rocky tidal zone of the entire study area with local biomass (sampling station) registered between 50 and 4000 wet tons. It was created using GIS abundance polygons that expose a stock of more than 100,000 wet tons of L. nigrescens in the study area. In contrast, it has a proven fragmented distribution within the Macrocytsis study area. Local populations are small and estimated biomass fluctuates between 2 and 12 wet shades. The sum of the local biomass allows for a standing stock estimate not exceeding 200 wet tons for the entire work area at that time.
Since Lessonia nigrescens brown Chilean seaweed fisheries represent more than 70% of the total landing, several studies have focused on this species. Studies on genetics, molecular biology, and population ecology indicate that L. nigrescens is a species complex of two cryptic species. Lessonia berteroana, Lessonia spicata, L. berteroana is distributed from the south of Peru (about 15 ° S) to about 30 ° S, and L. spicata occurs 30 ° South to South. Over the past decade, algae harvesting in Chile has mainly been maintained by the Lessonia nigrescens complex, particularly in the region known as latitudinal break for biodiversity distribution, which is considered at approximately 30 ° S.
Exploited and unused species of the Lessonia nigrescens complex from northern Chile were compared using morphological and demographic parameters such as density, biomass, participation, and population structure. These brown algae have properties that allow the effect of harvesting on other natural populations to be predicted. In this regard, there are morphological and demographic parameters used to evaluate L. nigrescens and they are as follows:
• Evaluating the results of good harvesting practices agreed by fishermen,
• To compare the harvest effect in areas with different management policies,
• To monitor the sustainability of exploited kelps,
• To recommend to the competent authorities the necessary measures or remediation measures for the sustainable management of the dynamic population of commercially important brown algae,