Biocatalysts are widely used in different economic industries such as the food industry. Biocatalysis can be performed using intact cells, immobilized cells, cell-free extracts, purified enzymes or immobilized enzymes. The microbial industry has developed rapidly due to the use of the latest techniques such as genome sequencing, directed evolution, protein expression, metabolic engineering and structural biology.

Enzyme applications
Enzymes are of great importance in industrial processes. These enzymes are used in the detergent, textile, pulp, paper, leather and biofuels industries, and biofuels have the highest sales. In the textile industry, enzymes are used as cleaners, reducing the use of raw materials and waste production. Pectate lyase is used in the cotton industry, and lipases, xylanases and laccases are used in the pulp industry for tar extraction. Cellulases are widely used in the textile industry as well as for the degradation of wood cellulosic feed stocks. There are several cellulases, such as endoglucanases that randomly degrade cellulose, cellulose dimers that release glucose dimers from both ends of the cellulose chains, and beta-glucosidases that hydrolyze oligomer chains to release glucose molecules. The main microbial source of cellulases depolymerizes trichoderma reesei plant blocks, releasing sugar molecules.
Enzymatic food industry
A particular group of enzymes plays an important role in the food industry and then generates massive income. The mechanism of action of the feed enzyme supports food digestion and therefore makes it easier to utilize feed. Moreover, they hydrolyze complex components that can be harmful or have no value. The most common commercial feed enzymes are phytases, proteases, galactosidases, glucanases, xylanases, amylases and polygalacturonases used in the porcine and poultry products industry. Lipase is a distinguishable group of enzymes used in the food industry. Maximum yield from lipases requires optimization of enzyme concentration, pH, temperature and emulsion content. The most common recombinant fungal lipases, rhizomucor miehi, thermomyces lanuginosus, and fusarium oxysporum are produced. Protease is also an important group of enzymes used in the dairy industry such as cheese manufacturing where it hydrolyzes a specific peptide bond that produces para-k-casein and macropeptides. The recombinant protease can produce 1 g / L chymosin after A. niger var awamorinitrosoguanidine mutagenesis and selection of 2-deoxyglucose resistance. There are four recombinant proteases that are approved by the FDA for cheese production. Although all of the enzymes mentioned are the most common in the food industry, there are others used in this application, such as invertase used in confectionery and jam production, galactosidase (lactase) used for hydrolysis of lactose from milk or whey, and galactosidase used. (e.g. for crystallization of beet sugar)
Enzymatic processing of chemicals and drugs
The chemical industry is based on low cost, easy methods and high quality enzyme technology. Enzymatic processing requires lower energy, which has many benefits such as high efficiency, high catalytic activity, low waste, by-product release and lower waste water flow. Genomic and proteomic technology development improves enzyme properties, which in turn improves the chemical industry. L-tyrosine is the main compound for protease conversion, and beta-lactam antibiotic production is one of the common pharmaceutical industries based on enzyme technology. Esterases, lipases, proteases and ketoreductases are used in the industry of chiral alcohols, carboxylic acids, amines or epoxides. Sometimes recombinant microbial enzymes increase the yield percentage up to 100%. A combination of random gene mutagenesis and ProSAR analysis increases the chirality of the ketoreductase enzyme from 63% to 99% towards tetrahydrothiophene-3-one. Improved enzymatic biotechnology supports the production of 2-methyl pentanol as an important intermediate for drug production.
Also, an improved acyltransferase helps in the conversion of the cholesterol-lowering agent lovastatin to simvastatin. Lipase is used in stereoselectivity for acetylation of the asymmetric diol during the production of an antifungal agent. Enzymatic biotechnology has many advantages, such as higher substrate solubility, reversal of hydrolytic reactions, and modified enzyme specificity resulting in novel enzyme activities.

Pektinazlar
Actinobacterial pectinases are widely used in fruit processing, including fruit ripening, viscosity increase, must reduction, must pre-treatment for wine industries, tomato pulp extraction, tea and chocolate fermentation, as well as in a variety of industrial applications such as the food and beverage industries. Pectinases are also used in the textile and paper industries for degumming plant fibers. Moreover, the combination of pectinase and glucosidase supports the fragrance, volatile substances and increases the antioxidant content of fruits and vegetables. Pectinases are produced from various types of microorganisms such as bacillus, aspergillus, rhizopus, trichoderma, pseudomonas, penicillium and fusarium.
Lipases

Lipases are used in a variety of commercial applications such as the detergent industry. The most common lipase-producing microorganisms are penicillium restrictum, candida rugosa, candida antarctica, pseudomonas alcaligenes, pseudomonas mendocina, burkholderia cepacia, geotrichum candidum DBM 4013, pseudomonas cepacia and bacillus stearothermophilus. In addition, burkholderia cepacia, candida lipolytica, bacillus coagulants, bacillus coagulants BTS-3, pseudomonas aeruginosa pseA, clostridium thermocellum 27405, yarrow lipolytica and yarrow lipolytica CL180 are among them.
Lactases
Lactases or -galactosidases are hydrolyzing enzymes that catalyze the hydrolysis of lactose at terminal residues, producing glucose and galactose. The microbial source of lactase are yeasts. These include kluyveromyces lactis, K. Fragilis and candida pseudotropicalis. There are also bacteria such as escherichia coli, lactobacillus bulgaricus, streptococcus lactis and Bacillus sp. Fungal species are, for example, aspergillus foetidus, A. niger, A. oryzae and A. phoeneciadı. Beta-galactosidase is widely used in the dairy industry and is also used in the crystallization of dairy products such as milk sugar, condensed milk, frozen condensed milk, yogurt and ice cream mixes.
Cellulases
Cellulases are hydrolyzing enzymes for cellulose substances to produce cellulose followed by glucose. The combination of cellulases and pectinases provides good results in applications in the juice and wine industries, and there is a wide variety of cellulase-producing microorganisms. These are trichoderma, penicillium, aspergillus, fusarium, phoma, acidothermus, bacillus, pseudomonas, staphylococcus, streptomyces, xanthomonas, acetovibrio, clostridium, pseudonocardia and thermoanaerobacter.
Amylases
Amylases are used in the textile, beer, liquor, bakery, baby feeding cereals and animal feed industries. Aspergillus and rhizopusen are common amylase producers. Amylases are used in the food industry to convert starch to dextrin, which is converted into maltose used in the production of soft drinks, beer, jelly and ice cream. Maltose can be converted into glucose used in soft drinks and the bakery industry. Amylases are the most commonly used enzymes in bread baking and also play an important role in the pharmaceutical industry.
Proteazlar
While proteases are used in the bakery, feed and beer industry, they catalyze the cleavage of peptide bonds in proteins. It is classified as exopeptidases and endopeptidases according to the site of the respective peptide bond to be cleaved. Recently, proteases represent 60% of the industrial enzymes on the market, as they are easy to obtain and recover. It has high coagulation activity with less risk. Proteases are mostly used in soluble proteins, chemicals and pharmaceuticals industry. Proteases are produced by bacillus, thermus caldophile, desulfurococcus mucous, streptomyces, and escherichia coli.
Glucose oxidase
Glucose oxidase can oxidize D-glucose with the formation of D-gluconolactone. The enzyme is used to remove harmful oxygen in the food industry to prevent toxicity.
Glucose isomerase 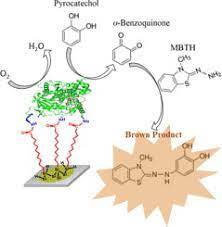 Glucose isomerase catalyzes the reversible isomerase from D-glucose and D-xylose to D-fructose and D-xylulose, respectively. Glucose isomerase plays an important role in the food industry, such as the production of fructose-rich corn syrup. The cloned gene xylAThermus themophilus was found and expressed under the control of the PGK1 promoter in saccharomyces cerevisiaemaya.
Reversing enzymes
It is produced by invertase saccharomyces cerevisia, and other microorganisms. The enzyme catalyzes hydrolysis from sucrose to fructose and glucose, and the addition of an invertase to banana juice increases its sweetness and viscosity.