According to sources, the first Olympic games were held in BC. Created in 776. No other panhellenic competition other than the Olympic games has been heard. Athletes from all cities of the Greek world would participate in these games. As in the city of Olympia in Antiquity, the opening of the Olympic games today is held by athletes carrying a burning torch.
At Olympia, advanced athletes compete in the pentathlon, which includes five sports. These are long jump, discus throw, javelin throw, running and wrestling. Sportive scenes were painted on the discs. The javelin was not thrown like it is today. The athlete would put two fingers on the handle of a long thin leather strap fastened on the stick. This would allow him to throw the javelin more violently.
Athletes would rub their body with oil before starting their training. After the study was finished, he would scrape the oil out of his body with a metal rod called “Strigilis”. 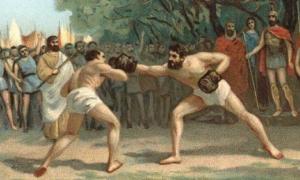 Athletes also used to wrestle. Whoever knocked his opponent three times would win.
The toughest sport of the competition was the pancreas. It was a mixture of boxing and wrestling. All kinds of hits were allowed. It was only forbidden to kill or blind the opponent. The referee would interfere with the cheaters by throwing his stick. At the end of the competition, the referee would put a red wool band on the winning athlete’s forehead and give him a branch. On the last day of the games, the winning athletes would gather in front of the Temple of Zeus and wear an olive branch crown on their heads.
The Greeks also played equestrian sports. Riders would ride without bareback. Equestrian sports and chariot races were held at the hippodrome.
B.C. Children began to participate in the Olympics in the 5th century. They competed in three branches along a track. These were wrestling, boxing, and running. Only adults participated in the armed run.