Gait analysis is the analysis of various aspects of walking or running patterns, the most common forms of human leg movement. Visual, vestibular, proprioceptive, musculoskeletal system, cardiopulmonary, nervous systems, etc. Normal walking is achieved when multiple body systems, including one, work properly and harmoniously. Injury or disease of any system can cause symptoms and dysfunction in joints and muscles, and abnormal gait. For this reason, walking performance is thought to be an indicator and predictor of the general health and functional status of individuals.
Gait analysis is an active research area for many medical, clinical and healthcare applications. The validity and reliability of gait analysis is highly dependent on the measurement tools used. In general, high-quality gait analysis requires accurate, detailed and comprehensive spatio-temporal characterization of the true locomotion model.

In rule-based gait detection systems, first the raw measurements of accelerometer and gyroscope are compared, then walking events are determined using a rule-based method. Finally, incorrectly determined walking stages are discussed and eliminated.

Different methods for gait detection have been presented in the literature. In a sense, walking phases are a function of time and inertia measurements. A raw measurements segment is shown, including the basic gait events and their constrained gait phases, together with the specific forces and angular velocities of both feet measured by the accelerometer and gyroscope, respectively.
Gait detection can be performed using a rule-based method from raw measurements or size, root mean square and moving average, which are simple and easy to implement. And the results show that angular velocity is more reliable than acceleration for typical walking. Angular velocities provide more specific features for gait detection than specific forces, particularly the angular velocity around the Z axis in the sagittal plane. Due to the specificity of foot movement, there are at least two possible explanations for this phenomenon:
• Although angular velocities have large bias, their SNR (signal-to-noise ratio) is higher than that of certain forces.
• Specific forces are distorted by the integrated effects of initial alignment error, gravity distortion, and accelerometer deflection.

From inertia data, gait detection rules can be predefined based on the basic truth provided by the Vicon system. In general, three types of rules can be included in the perception process, these are rules;
• peak detection,
• Flat zone detection
Zero cross detection
Take the stance phase, for example, it is the nature of the walking or running motion that the foot swings to stance phase with each gait cycle and then exhibits zero speed until it swings again. This information can be effectively used with the flat zone detection method to identify successive stance phases. With careful rule design and parameter selection, rule-based methods can identify all relevant events from a long array of inertia data.
For a 20 m straight walk, the detection results can be calculated differently. However, the measurements are characterized by some spikes that can cause momentary fluctuations in the magnitude of angular velocities or short-term statistics, particularly when HS and TO events occur, which can therefore result in false gait detections. In some studies, a time heuristic method is applied to the raw sensing results to avoid the unnecessary effect of measurement fluctuations, namely, misrepresentation, interruption or missing gait phases.
This is achieved by adding a time duration threshold to filter out shorter walking phases than the threshold, as false gait phases are often short. However, since all thresholds are set manually, they may work well for the gait data from which they are derived, but may not apply to the individual gait of each subject.

Since each individual has a unique gait pattern, the percentage of gait cycles spent at each stage differs slightly between literature sources. In the literature review, how to choose a time duration threshold to eliminate inaccurate gait phases is rarely openly discussed based on empirical evidence. Therefore, an adaptive time threshold is required to provide a more robust method of gait detection. As was done in previous studies, a clustering technique can be used to automatically distinguish between correct and incorrect gait phases according to time durations and simultaneously give the time threshold parameter. 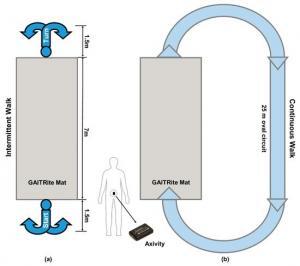 In this scenario, as the number of clusters is known, k-mean or k-median methods can be used because of their simplicity and efficiency. It is treated as a binary classification of potential walking phases. These;
• Clustering of stance phases
• Clustering of release phases.
There are multiple parameters for gait detection that are interrelated and work together to achieve goals. The clustering technique adopted tries to automatically adjust one of the thresholds (ie the time threshold of walking phases) and further facilitate the selection of other thresholds. However, careful parameter adjustment is still needed. In general, rule-based methods rely on careful sensor alignment and a set of thresholds that are fragile or difficult to implement due to the natural variability of human gait.
Moreover, thresholds are often set manually and fixed throughout the entire process, regardless of gait changes, and the process of drafting rules and setting thresholds itself is frustrating and time consuming. Also, new detection rules and associated thresholds are required if new sensors are added to the installation or if the sensors are installed in new locations. Therefore, there is a clear need for an adaptive detection method.

Gait Detection Based on Machine Learning

As mentioned above, gait detection is essentially a pattern recognition problem. Hidden Markov models (HMMs) are widely used for pattern recognition. An HMM-based method was developed for gait detection in children with and without hemiplegia, and gait events were identified as hidden situations. A classifier based on HMM is applied to determine the walking phase and to distinguish between walking-running activities.
HMM was used to determine the gait phases of children with cerebral palsy. However, HMMs are less suitable for high dimensional gait data. An HMM is adopted to estimate temporal gait parameters with a feature selection and model parameterization system based on genetic algorithms (GAs). An HMM is presented to detect gait phases with observations provided by a five-layer feed forward neural network (FNN).
Overall, these hybrid methods outperform pure HMMs when dealing with high dimensional data. Inspired by existing methods, an adaptive hybrid method has been presented in previous studies, modeling human gait with left-right HMM and using a three-layer neural network (NN) to cope with raw measurements.

HMM is a statistical model used to represent the discrete and stochastic Markov process where states cannot be directly observed. It can be of three types;
(a) Ergodik,
(b) Left-right
(c) Parallel left-right
Each time, the HMM is only in one state. For gait detection, gait events or their restricted stages are hidden states of the HMM. Due to the periodic nature of the regular foot movement with the sequential sequence of walking events, each situation can only pass to itself or to the “right” state. Thus, each gait phase can be represented by a unique state in the HMM using a left-to-right model, where the state is the transition probability. This process provides a set of hidden situations and a set of corresponding observations. Each HMM situation corresponds to a walking phase that begins with the current walking event and continues until the next event.
Hybrid walking model based on NN- / HMM 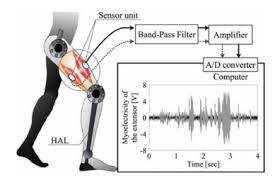 Given a sequential series of observations and a trained HMM, the Viterbi algorithm can predict the most likely latent sequence. However, HMMs are generative models, whereas discriminatory models are expected to achieve better classification results. Discriminatory models based on machine learning techniques are perceived as promising alternatives to HMMs. Generally, any machine learning method such as support vector machine (SVM), k-nearest neighbor (k-NN), and neural network (NN) can be used for gait detection. It has been found that NNs can provide the best balance between efficiency, accuracy and computational complexity.
NNs can automatically learn nonlinear input combinations, and a three-layer network can approximate any multivariate polynomial function. However, pure NNs are limited to process inputs in isolation. An intuitive way to take advantage of both NN and HMM methods for gait detection is to put them together in a hybrid way. NN can first process gyroscope measurements and provide observations for HMM with their classification. Each NN entry is created using the sliding window approach and can therefore be high dimensional. HMM can model the cascading property of human gait and complement NN by providing contextual information.
It shows the framework of the training and testing procedures of the hybrid detection method. While the NN- / HMM-based hybrid method is computationally complex for training, it is computationally efficient at runtime. It does not require careful sensor alignment or parameter adjustment and generalizes well to new topics, new walks, new sensors and new sensor positions.