Using modern technology and some of the traditional methods of the maxillofacial anaplastologist can be applied. With this application, it is technically possible to produce realistic soft tissue prostheses quickly and directly using 3D printing. A 3D model of a traumatized or defective area can be designed using existing 3D imaging techniques, which are more accurate, convenient than impressions, and less harmful to the patient than CT or laser imaging. Also, by incorporating the attachments, a prosthesis with exceptional fit and hold can be produced.

To achieve a lifelike and natural looking prosthesis, any 3D printing method must include accurate color management processes that transform the patient’s skin tone into a machine-readable format for 3D printing and provide an accurate, inherently colored prosthesis that matches the patient’s. own skin color. In addition, if appropriate infiltration materials are used, external coloring can be added to the prosthesis through a colored infiltrant or by staining by the prosthesis specialist. In addition to color management, it is also possible to create a two-piece tissue design workflow that ensures that the fabrication exactly matches the patient’s original characteristics.
If the patient has already had surgery to remove the affected facial part, they will usually have precision attachments that hold the existing prostheses. In such cases, due to the data capture limitations for these attachments, acrylic protrusions of anatomical features such as small parts, shiny surfaces, bumps, cuts and recesses can be used to enable the camera to capture the exact position of all precision attachments used. Ideally, the patient should also be kept in a neutral pose during imaging.
Using automatic elevation area mapping and manual engraving to improve features, it is possible to produce a prosthesis that resembles the patient’s original morphology and skin texture. Considering the materials that can be used to print such models, the accuracy that can be achieved not only in terms of surface texture but also in terms of optimization of infiltration protocols should be considered. These will inevitably improve the manufacturing process and the overall finished appearance.

Maxillofacial prostheses, or anaplastology, refers to the expertise in designing and manufacturing prostheses used to replace part or all of any stomatognathic or craniofacial structure. Provides descriptive evidence of the prosthesis, including procedure, placement, holding, support, time, materials, and shape. It is both an art and a science of cosmetics, anatomy and functional reconstruction, achieved by artificial substitution of incomplete or defective head and neck structures. It is a branch of dentistry that improves internal and external deformities.
Extensive tissue loss involving the face (or any other body structure) cannot, in many cases, be surgically corrected due to the lack of sufficient or sufficient donor tissue that may be required for surgical repair and reconstruction. In addition, the patient’s age and general condition may not allow for extensive surgical procedures or allow for morbidity often associated with prolonged reconstructive surgery and recovery courses. In addition, the end result can often be compromised aesthetically and functionally. In such cases, imperfections can be artificially replaced by the provision of facial prostheses to provide functional rehabilitation and aesthetic improvements. Often there is an associated improvement in social, emotional state and overall quality of life.

A 3D color image reproduction protocol has been developed for automatic 3D printing of facial prostheses. The first step involves 3D scanning of the face using a 3-compartment 3dMD photogrammetry system (3dMD, Atlanta, GA, USA). The system captures both the 3D topography and color information of the scanned surface under controlled lighting and viewing conditions. Mesh data obtained from the scanner often have geometry and color errors and therefore requires further editing before it can be sent to the printer. Using a combination of software packages such as Magics (Materialize, Leuven, Belgium), for example, the scanned raw data can be modified and corrected by removing noisy polygons, as well as color adjustment of areas containing specular highlights or other inaccuracies.
The next step to add realism involves adding fine texture (eg pores, wrinkles) to design on a 3D mesh using high field mapping. Finally, thickness is added to the mesh data to produce a solid printable pattern. As with surface topographic information, color images from the 3dMD camera system may require further processing before being superimposed on the 3D mesh before final color printing. This primarily involves color management of a 2D color image from camera RGB to printer RGB for each pixel using specific camera and printer color profiles, respectively. For this particular task, the color profiles used have been developed using both traditional colorimetric and spectral-based reproduction methods. 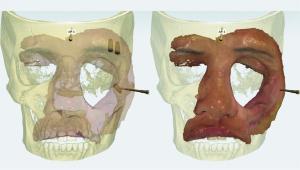 When color management is complete, surface texture mapping is performed to match the newly created color image with the rendered 3D model. The penultimate step involves 3D color printing to produce the 3D model using the 3D printing system, and then, as the finishing step, the strength and flexibility of the printed model is enhanced by infiltrating it with medical grade silicone.

3D face data can be obtained using a variety of different techniques. CT and MRI scans have been used for RP of internal body organs and structures, and for facial prosthesis prototyping. These techniques include patient-specific internal body parts or organs, etc. It has an advantage over external body 3D scanning as they can be used to create 3D models. However, due to their lower resolution, they cannot capture fine textural details such as pores and wrinkles. on the surface of the body. Also, data capture is performed in supine positions and therefore can affect the accuracy of the captured data as the positional details do not really reflect in a natural upright repositioning position. Finally, there is no capability to capture color data using these modalities. Compared to CT and MRI, 3D photogrammetry is becoming more popular due to the convenience of data capture, the lack of exposure to ionizing radiation, the ability to capture data in the prone position, and the relatively easy storage, transfer and use of data. Moreover, such systems are relatively affordable. Laser scanning Kinect structured light and speckled projection stereo has also been previously used to obtain 3D scanned data for the fabrication of facial prostheses. Although the techniques for image acquisition and 3D reconstruction using these methods are different, the outputs produced are similar in terms of the data produced, and they all generate 3D mesh data and color information for the scanned geometry.
Typically, surface scanners, including the 3dMD scanner, are based on the speckle projection technique and have been successfully used in this project. This system is based on stereo photogrammetry and then calculates stereo fidelity by projecting infrared speckle patterns onto the target surface to generate a 3D depth map of the scanned surface. It consists of several machine view cameras and infrared speckle projectors combined with a flash system to simultaneously obtain texture and 3D topographic information. These are collectively known as pods. The process then combines all the viewpoint data in each pane to create the final 3D polygon mesh with the color images, and then is placed over the 3D mesh to add color, texture, and appearance.
The resulting web can then be saved as an OBJ file for processing and editing purposes. Protocols can be developed to assist in data capture to provide sufficient quality images. These can include:
• Image capture in a dimming facility,
• Minimizing patient movement,
• Using consistent environmental lighting protocols and following camera manufacturers’ recommended image capture protocol, including geometric and color calibrations just prior to imaging.
• When capturing images for use in 3D printing of facial prostheses, patients should be asked to remain still during the image capture process in order to avoid any movement disorders.