Children with attention deficit hyperactivity disorder (ADHD) pose a major problem in the education process because they are inattentive and cannot follow the teacher’s instructions during the lesson. There are also various learning difficulties. ADHD is a clinically heterogeneous neurobehavioral disorder associated with enormous financial costs, stress to families, negative academic and professional outcomes. In adulthood, this situation is completely insurmountable and addiction, dangerous behavior, unsuccessful profession, high divorce rate, etc. remains a great risk to you. The diagnosis of this condition varies over different time periods. As minimal brain damage or minimal brain dysfunction, the condition was named until 1994 and for the first time renamed as hyperkinetic disorder.
Three main symptoms – inattention, impulsivity, and hyperactivity – are listed in both guidelines, the International Classification of Diseases (ICD-10), the fourth edition of the Diagnostic and Statistical Manual, where the disorder is called hyperkinetic disorder (HCD). Mental Disorders (DSM-IV) called attention deficit hyperactivity disorder. In DSM-IV, diagnosis includes three different groups of children: predominantly hyperactive-impulsive type, predominantly inattentive type, and combined type ADHD, with the ratio of boys to girls being approximately 4: 1 for all three subgroups. In May 2012, the American Psychological Association revised the Fourth Edition of the Diagnostic and Statistical Manual of Mental Disorders, which included some changes in the section on specific learning difficulties. As a result, DSM-5 views Specific Learning Disorder (SLD) as a type of neurodevelopmental disorder that delays the ability to learn or use certain academic skills (for example, reading, writing, or arithmetic).

In this context, SLD is a clinical diagnosis that is not synonymous with learning disability, mainly used in the education system. It characterizes the specific manifestations of learning difficulties during assessment in three main academic areas: reading, writing and mathematics. The group of entities called other neurodevelopmental disorders are mental disability, autism spectrum disorder, attention deficit / hyperactivity disorder, communication disorders, and motor disorders. As a result, whatever the criteria for diagnosis are, ADHD remains a major cause for learning problems. Differences in diagnostic criteria following different guidelines affected different prevalence rates. As a result, PCD is estimated to occur in about 0.5% of children, while ADHD has been reported in 5 to 11.4% of the population.
Differences in diagnosis have important implications for both diagnosis and treatment. Because depending on which criteria are used, a child may or may not be considered to have a clinical disorder, school time and need some treatment. Many researchers have actually mentioned that ADHD represents a process from normal to abnormal behavior. Behavioral studies of children with a predominantly inattentive type revealed that these children have some special problems. For example, inattentive children are less impulsive and show less behavioral problems than hyperactive children. On the contrary, they are more anxious, socially withdrawn, shy, and have more internalizing symptoms. Additionally, they more frequently raise academic failures and learning problems.
Inattentive children are easily confused, staring frequently, often daydreaming, and are lethargic, hypoactive and passive, which is not common in hyperactive children. More specifically, in inattentive children, the problem of persistent attention (persistence) and distraction is more characteristic in the compound type of ADHD, while deficiencies in information processing speed and focused or selective attention are acknowledged. These findings suggest that perhaps inattentive children should be treated as a specific disorder group and not just considered a form of ADHD. Although there are no genetic markers in the identification of children with ADHD, it has been proven that dopamine-related genes play a role in the pathogenesis. In addition to some form of inheritance, this is confirmed by the fact that the condition can be present in same family members, especially twins. Several recent studies have shown that attention deficit hyperactivity disorder shares similar genetic roots and brain structure with autism and obsessive-compulsive disorder (OCD). 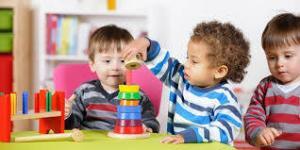 Impulsivity is characteristic behavior in all three conditions. In addition, under these conditions, brain structure presents abnormal findings, particularly in the structure of the corpus callosum, with widespread degradation in white matter. However, children with OCD show less structural changes compared to those with autism or ADHD. This is the likely reason why children with ADHD, as well as children with autism, show specific symptoms earlier than OCD, which can begin even in adolescence. When conducting genetic analysis, eight copy number variants (CNVs) are identified, which are more common in people with ADHD than those without this problem. The same CNVs are also involved in autism and schizophrenia. In this context, the new hypothesis is that autism, schizophrenia, and ADHD may have similar biological bases. However, the findings do not confirm predisposition genes for ADHD that have greater effect, but they may identify smaller impact genes. Whole genome linkage studies have provided some interesting results for chromosomal regions that need to be investigated further.
The complexity of the ADHD phenotype together with some genetic findings suggests that determination of the endophenotype may be a useful strategy for definitive diagnosis. An endophenotype, the intermediate phenotype, is defined as an inherited biological trait. It is reliable in reflecting the function of a separate biological system and is assumed to be more closely related to the genetic cause of the disease than the clinical one. Integration of these two approaches (endophenotype and genetic variants) possibly leads to more accurate results. In this context, increased theta power in EEG recording is assumed to be a candidate biological marker of genetic risk for ADHD. Many imaging techniques are used to find the possible neurological basis for ADHD. Positron Emission Tomography confirms lower brain metabolism in children with ADHD in the areas responsible for attention, social judgment, and movement. It is also validated with FMRI, SPECT or BOLD techniques. However, Q-EEG recording appears to be a more convenient, inexpensive and useful indicator of brain metabolic activity.
It has been confirmed that the low metabolic activity in the area producing the corresponding EEG signals is characterized by increasing slow activities (delta and theta waves) and decreasing fast beta activities. Strong evidence for the usefulness of Q-EEG in the diagnostic evaluation of ADHD comes from a study by Monastra et al. Many studies have confirmed that the main brain system that is impaired in ADHD is the executive system. There are two execution system specific parameters and they are as follows:
• Stimulation as a generalized activation of the system,
• Attention and focused activation associated with the working memory of the system, action selection, action blocking and action tracking,
As mentioned earlier, endophenotype becomes an important concept in ADHD study. In psychiatry, the endophenotype can be categorized as anatomical, developmental, electrophysiological, metabolic, sensory, or psychological, and cognitive. In this way, the endophenotype represents a simpler indicator for the genetic mechanism than the visible behavioral symptoms. It helps to identify subtypes of a particular disorder and can be used as a quantitative feature in the genetic analysis of probands and families. In this way, the Q-EEG spectrum classification of the ADHD population was developed by identifying four main endophenotypes. Besides, it is seen as four subtypes and these are as follows:
Subtype I, in which an abnormal increase of the delta-theta frequency range from the central frontal predominates,
II subtype with abnormal increase in frontal midline theta rhythm,
III subtype with anterior increased beta activity,
IV subtype characterized by excessive alpha activity in the posterior, central or frontal lobes,
Still, the complexity of ADHD has implications for the underdiagnosis or misdiagnosis of this condition in many school children, on the contrary, some hyperdiagnoses are also possible. For example, in one study, many gifted children were diagnosed with ADHD because the usual school schedule seemed boring for them and they exhibited hyperactive behavior. Misdiagnosis can also be the result of many comorbid disorders that accompany ADHD, such as behavioral problems, high general anxiety, depression, speech problems, autism spectrum disorder, or epilepsy. In this case, true ADHD may overlap with other similar conditions. From a neuropsychological perspective, comorbidity is thought to be the result of cognitive mechanisms involved in the same brain attention and behavioral regulation. Testing the level of intelligence is of primary importance as a starting point in the assessment of children with learning problems. Biofeedback is a technique that helps to learn the control of body functions such as heart rate, skin activity, muscle tension, peripheral temperature, respiratory frequency and brain waves. While biofeedback can be peripheral or central, neurofeedback is a specific behavioral therapy technique used to teach or enhance the self-regulation of brain activity. The purpose of frequency band neurofeedback is to activate a specific brain network. The common protocol for neurofeedback in many studies includes reducing theta activity at specific skull points and optimizing beta brain activity, depending on the Q-EEG subtype. In addition, personalized biofeedback protocols were used for the ADHD group, depending on the Q-EEG subtype.
It is clear that with this type of therapy, it causes theta to decrease, the higher power of beta brainwaves, change the theta / beta ratio, and change the brain rate parameter. In the evaluation of ADHD, the theta / beta ratio of the patient is a parameter used in many studies. The brain rate parameter is an indicator presented by Pop-Jordanova N. and Pop-Jordanov J. for the evaluation of general mental arousal. The values ​​of this parameter have been approved in other studies. The most frequently reported finding in electrophysiological studies of children with ADHD is increased low frequency activity (predominantly theta) compared to age-appropriate normal controls. Results are similar and correspond to previous research examining electrophysiological measurements in children and adolescents with ADHD compared to normal controls. This is usually an increase in theta activity and a decrease in beta activity has been reported.
Bearing in mind that ADHD is a complex syndrome, diagnosis should mainly include extensive neuropsychological evaluation to evaluate the executive system because symptoms can differ from child to child. In the therapeutic approach, it has been confirmed that neurofeedback is an excellent tool for training specific brain networks and thus improving behavior, but the therapist is still an indispensable component in treatment. Support, instructions and the presence of a specialist near the child are a guarantee of success. In some countries, different biological feedback methods are used for stress management and educational skills for better success in school settings.